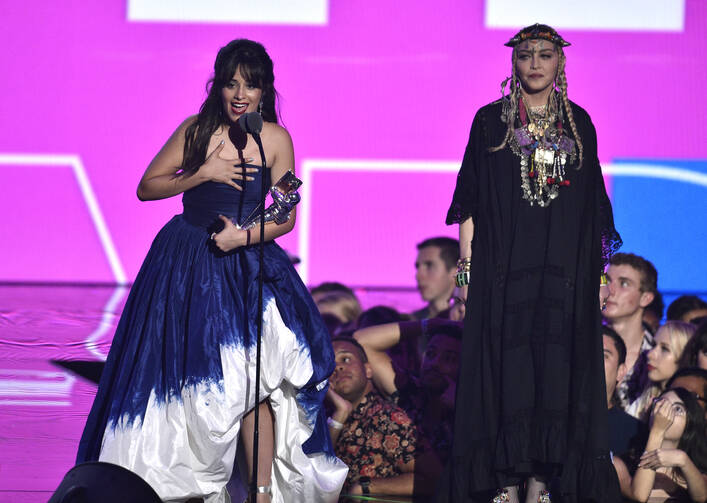 Camila Cabello, left, accepts the award for video of the year as presenter Madonna looks on at the MTV Video Music Awards at Radio City Music Hall on Monday, Aug. 20, 2018, in New York. (Photo by Chris Pizzello/Invision/AP)

The 2018 Video Music Awards (sponsored by PepsiCo) aired Monday, Aug. 20, on MTV, and called to mind a cold can of soda: fizzy, sweet, all-American, but strangely guilt-inducing, a stomach-churning confection that tastemakers have mostly written off and sentenced to passé-dom. Maybe a show like this was better suited to a time when we, or at least I, felt less self-conscious about the pop culture we—I—consumed. When it felt freeing to escape and relaxing to let loose, when I danced and sang along and stargazed without worry. When I wasn’t 22 and jaded by the state of the world, convinced that fun is over and done with.

I lingered on the periphery of the red carpet in front of Radio City Music Hall,two blocks from America in midtown Manhattan, taking in the scene. Rumors circulated that MTV stalwarts including Nev Schulman (“Catfish”), Pauly D and Vinny Guadagnino (both of “Jersey Shore”) had arrived. The New York Police Department was on hand, directing traffic and keeping potential troublemakers in line. Barricades bounded the intersection of 50th Street and 6th Avenue. Mobs of commoners clustered, eager—desperate, even—to reach out for some stardust and claim it as their own. Black Escalades inched up the avenue, one by one, and deposited their sequined cargo on the red (more like faded magenta) carpet.

The stars traipsed down the sidewalk wearing off-white and black and nude—their color palette of choice these days. Quavo and Offset, of the hip-hop trio Migos, triggered joyful pandemonium. Nicole “Snooki” Polizzi, also of “Jersey Shore,” poked her head out of a shiny car and waved. If this were 2002, maybe Donald Trump and Melania Knauss would have done the same.

TV cameras affixed to the ends of long poles leaned up and down over the carpet, turning like construction cranes. The streets swelled. People shouted unintelligibly. Across one man’s chest was a sweat stain shaped like Ireland. Not even a screaming ambulance could make it through without being delayed.

I weaved through the gaggles of fans and found that many, stifled by the humidity and the proximity to strangers and cursing the poor sight line, were getting restless. Someone blasted Ariana Grande’s recent hit “God Is a Woman” on an iPhone, holding it up the way earnest everymen hold up boomboxes at the end of  ’80s teen movies. Early in the night, before Migos and Snooki, before Nicki Minaj and Kylie Jenner, we did not take our eyes off the sparsely populated carpet, for fear that we’d—what? Lose a staring contest? Miss seeing the backside of some minor YouTube starlet?

“There’s so many people looking,” said a girl in a backwards baseball cap, “but there’s no one to see.”

The dual, and very 2018, spectacles of celebrity and politics intertwined, tangoed.

At 9 p.m., the ceremony was televised on MTV, where the dual, and very 2018, spectacles of celebrity and politics intertwined, tangoed. Among the nominees were music videos that made bold statements about culture (notably, The Carters’ “APESHIT,” which saw Beyoncé and Jay-Z take over the Louvre) and brimmed with political imagery (Childish Gambino’s “This is America,” which commented on gun violence and racism). Near the start of the ceremony, the comedian Kevin Hart lobbed a few half-hearted barbs at the White House and told the audience they could kneel if they wanted, and that “there’s no old white man to stop you.” Then he asked the audience to see his new movie. The actresses Anna Kendrick and Blake Lively plugged their new film against a backdrop of glimmering Rockettes. Everyone was selling something, including—especially—their expertly curated, highly scrutinized selves.

This jittery commingling of stone-faced advocacy and glossy escapism defined the night. Efforts to address injustice proceeded in fits and starts, bordered by self-help lingo extolling empowerment and wealth and truth. The rapper Logic performed with a large group of immigrant families wearing shirts that said “We Are All Human Beings.” Later, a gyrating Jennifer Lopez sang, “Yo quiero, yo quiero dinero” (“I want, I want money”). After the actress Millie Bobby Brown revealed the winner of the award for Best New Artist, the screen flashed to a commercial break and a voice proclaimed that “Taco Bell congratulates Cardi B.” Often, talk of justice collided with stylized commercialism, as when the presenters of the award for Video with a Message explained that tonight’s nominees “remind us all to speak our truth.”

This jittery commingling of stone-faced advocacy and glossy escapism defined the night.

Even before the pre-show started, some congregants outside Radio City gave up. As frustration with the stuffy conditions and tight quarters mounted, the crowd thinned. “I’m over it,” said a girl. “I’m literally so over all these people.” I can’t say I disagreed with her. What was anyone doing here? What did we expect? That we’d be able to take a load off, relax for a while, forget about our problems? That the comfy warmth of celebrity might cushion us as we navigated the choppy sea that is national politics in the United States circa 2018 A.D.? American hedonism isn’t what it used to be, I decided, still feeling 22 and jaded. Washington has spread everywhere, like a bacterial infection. Fun™ is diluted, not technicolor but gray.

And when the crowds dispersed, and the awards were doled out, and the stage-transforming light shows finished glittering with state-of-the-art special effects, all the celebrities returned to their triplexes in TriBeCa and their estates in Hidden Hills. They will refresh Instagram and cobble together a sponsored post, hawking vitaminwater® or PVC boots made in China. I rubbed my eyes and crept uptown, toward the rhinestone towers that loomed overhead. I found a bodega and, for the first time in a while, bought a Pepsi. It tasted incredible, but once I gulped down the whole thing and crushed the can, a weird feeling settled in—and stayed.

Brandon Sanchez is a Joseph A. O'Hare fellow at America.

What an excellent, concise, accurate and embarrassing snapshot of American culture, or the lack thereof.

These people are a pimple on the backside of life - not outrageous, not artistically provoking, just annoying. Let us pray that they quickly fade back into well-deserved oblivion.