“American Vandal” takes on teenage sociopaths at a Catholic school 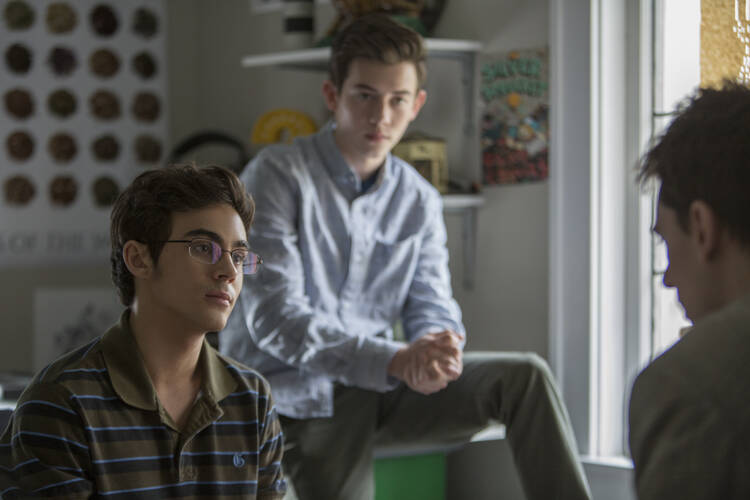 In August, Vulture spent a week exploring what it called “The True Crime Wave." Over the course of 13 stories and tens of thousands of words, Vulturewriters looked at “what has become one of the most dominant genres in pop culture.”

The obsession with true crime is anything but new. Indeed, sordid tales of violence and corruption lie at the heart of the origins of journalism; the cruelty and injustices that crime stories expose draw us as inexorably as a low-pressure front draws air.

But in the last five years, the genre has exploded, particularly in the form of serialized podcasts investigating unsolved or questionably resolved cases. Where once the writer was the sole authorial voice, podcasts create the experience of being both investigator and jury ourselves; we get to hear from everyone involved and walk with the host down every alley. Some even undertake to join in the hunt for clues, the thirst for justice (and/or mob rule) married to our innate enthusiasm for a treasure hunt.

Over the course of the season, it becomes clear that the desire to produce a funny snap has come to trump any sense of others as human beings worthy of care or respect.

When “American Vandal” debuted on Netflix last year, it seemed to be positioning itself as the raucous send-up of the genre, with super-serious high school student Peter Maldonado (Tyler Alvarez) investigating, in his words, “Who drew the dicks?” Based at a high school in a California beachside community, “Vandal” was an eight-part faux-documentary exploring whether a dopey senior with a predilection for “Jackass”-style stunts and drawing genitalia on chalkboards was responsible for spray-painting phalluses on the faculty’s cars.

As one might expect given the crime, what ensued was in many ways ridiculous, hilarious and mostly unprintable here. And yet in the end “Vandal” also offered an unexpectedly insightful meditation on innocence lost and the brutality of snap judgments. As the accused Dylan Maxwell, the actor Jimmy Tatro gives Dylan’s dumbness a sweet naïveté that proves heartbreaking.

In Season 2, which dropped on Sept. 13, Peter and his classmate Sam Ecklund undertake a new investigation in Washington State. On the surface the case seems to have the same pixie dust of wit and absurdity of Season 1; at St. Bernardine’s Catholic, a student known as the “Turd Burglar” has undertaken an excrement-themed series of attacks on the student body and faculty, starting with lacing the cafeteria lemonade with industrial strength suppositories, to brutal and explosive effect. (The event is dubbed “The Brown Out.”) Once again a student has been accused and expelled; once again the boys investigate whether he might not be innocent.

As silly as that may sound, there is a much sharper edge to this new premise. The footage of the Brown Out is funny only at first; soon we are watching kids sit at their lockers crying in pools of their own defecation. And the supposed villain, Kevin McClain (Travis Tope), is a strange, affectless kid who has himself been tormented by his peers most of his life. The set-up seems poised to offer its own off-kilter slant on school violence.

In the end, the villain of the series may have done awful things, but it is the students who come off as genuine sociopaths.

Instead the story pivots quickly to the charismatic high school basketball player DeMarcus Tillman, who has no conceivable motivation for committing such crimes but is wonderful to hang out with (actor Melvin Gregg is outstanding), followed by an endless parade of other suspects we spend so little time with it proves nearly impossible to distinguish them from one another.

In some ways you can see why the story goes this way; McClain is an annoyingly weird dude. He spends his time creating mannered YouTube videos on the proper drinking of tea, DJs bad techno music while wearing a rubber horse head and, in general, reads not as angry or dangerous but hollowed out.

Of course, that is what makes him different from the typical portrayal of school shooters. The longtime emotional battery he has suffered has turned him so far inward he is effectively vanished from sight, or fled.

‘Roseanne’ and the Two Standards of ABC
Jim McDermott

Meanwhile, though few would claim the world is crying out for more stories about the perils of social media, “Vandal” stumbles into interesting waters. Portions of the documentary are woven out of the funny things students post on Snapchat—hearts spinning over a staff member known only as “Hot Janitor,” kids throwing fruit at McClain. And over the course of the season, it becomes clear that the desire to produce a funny snap has come to trump any sense of others as human beings worthy of care or respect. In the end, the villain of the series may have done awful things, but it is the students who come off as genuine sociopaths. Unfortunately, the story never stops to consider the implications of that reality.

But never mind, we have got clever excrement-themed names for each of the attacks and every episode, and a likable star to cut to until the finale tries to spin the season into gold. Please disregard the commotion, that is just Truman Capote shrieking in his grave.

Excrement and phallic symbols. Why on this site?

At times, I have viewed pornography (even as an adult) but have regretted my acts and then gone and received forgiveness through the Sacrament of Reconciliation. I must admit that at times I 've also watched movies (or occasionally television programs) with excessive violence and sexual situations. But I do try my best to watch wholesome movies and television programs, and again have gone to the Sacrament of Reconciliation at times for consolation and forgiveness. But although this review I believe was intended to discuss the perils and difficulties of adolescence, I agree that it's unnecessary and vile for a Catholic site to go into details about excrement and phallic symbols.

Thanks to this review, I can avoid the experience of watching any of the series. I'll just add it to my list of disgusting avoidables like Fox Nooz. As for whether excrement attacks occur in real life, they do and are not restricted to the other primates.

The Met gala, David Wojnarowicz and "American Vandals" - a perfect trifecta of edginess. Is this a subtle jesuitical plot to make sex so boring and unattractive that more of us find ourselves praying for the gift of celibacy?