‘Roseanne’ and the Two Standards of ABC 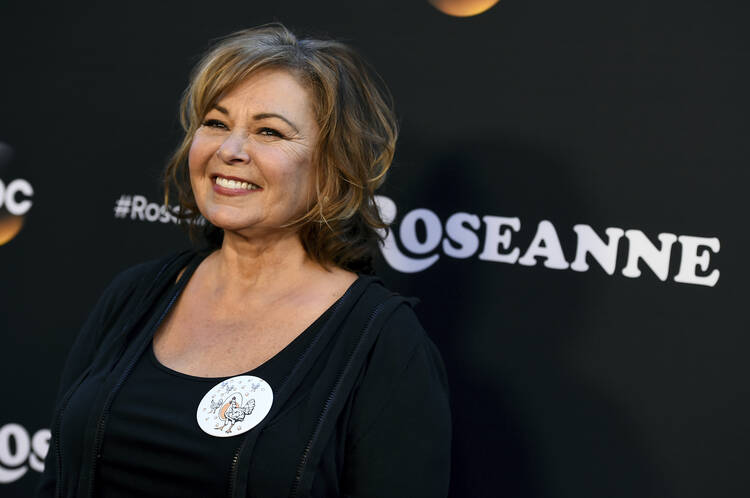 In this March 23, 2018, file photo, Roseanne Barr arrives at the Los Angeles premiere of "Roseanne" on Friday in Burbank, Calif. (Photo by Jordan Strauss/Invision/AP, File)

While many cheered ABC’s move, it is not as though this moment was hard to see coming. Ms. Barr has long presented herself as a blue-collar provocateur, stirring the pot in whatever ways might most disrupt or unsettle. The reboot of her show has been notable mainly for its willingness to explore and sometimes indulge prejudices, like all Muslims are terrorists or undocumented immigrants are stealing our jobs. In its third episode Ms. Barr’s character mocked ABC’s primetime schedule itself as “all the shows about black and Asian families.” (Yesterday Shonda Rhimes, creator of many of ABC’s most successful and diverse dramas, including “Grey’s Anatomy,” “Scandal” and “How to Get Away with Murder,” tweeted her thanks to ABC head Channing Dungey.)

ABC faced a decision: invest in stories that speak to our best selves, or make a big splash with a show that draws out our worst instincts.

The same week ABC rebooted “Roseanne,” it also launched “Alex, Inc.”, a half-hour sitcom based on the true story of podcaster Alex Blumberg, who quit his job at “This American Life” to start his own podcasting business. The show, which stars Zach Braff, splits its time between Alex’s nascent business and life with his Indian-American wife and children. But it ends up being more about our capacity every day to create something beautiful out of nothing. So in the pilot, when his kids mock what their dad does for a living, Alex spontaneously creates an old-timey radio show for them. And while it starts silly, it ends up kind of magical. (Disclosure: an acquaintance did some writing for “Alex Inc.” and Channing Dungey taught a class I took at U.C.L.A.)

Almost every episode of “Alex, Inc.” offers a moment like this where someone puts themselves out there, has faith that good will come of it and is rewarded with something a little bit wonderful. Alex’s young daughter Soraya, played by the great Audyssie James, gets up at a school talent show and quietly sings Sara Bareilles’ “Brave,” or the family spontaneously throws a Holi party for Alex’s Indian mother-in-law. The show presents the universe we hope we are living in, a place that is fundamentally oriented to the good, that welcomes us as we are, and at whose heart is not outrage or derision but family, faith and wonder.

“Alex, Inc.” got lost in the buzz around “Roseanne” and was recently canceled. Meanwhile some critics labeled “Roseanne” as heir to “All in the Family,” an important glimpse into working-class white America today (or America itself, depending on who was writing). ABC gave the show a second season after its first night back on the air.

In Ignatian spirituality there is a meditation known as “The Two Standards.” The retreatant is asked to imagine themselves standing on a battlefield; at one end flies the banner of Christ, at the other the standard of the forces of darkness. It is a 16th-century version of the cartoon angel and devil on our shoulders, with us in the middle, fielding the invitations and trying to figure out which is the path of life.

Usually the decisions of our lives are nowhere near as obvious as all that; we struggle to decide between two good options, or two bad ones, or a good one and a bad one that in other circumstances might actually be pretty good.

Why Sitcoms Matter: The importance of being funny
Jake Martin

At the end of the day, that is the most unsettling thing about the ABC-“Roseanne” debacle. Because the situation there really was pretty black-and-white: invest in stories like “Alex, Inc.” that speak to our best selves, our aspirations, or make a big splash (and a quick buck) with a show that too often seemed interested in drawing out our worst instincts.

Social commentary aside, the new “Roseanne” mostly featured characters belittling one another. At its roots it celebrated not working-class white America, but meanness and smallness. It is pretty hard to find a good justification today for putting out any more of that.

The indisputable fact that illegal immigrants are stealing American jobs is not a "prejudice," and as despicable as the ultra liberal Rosanne Barr is, no more a conservative than Archie Bunker, the "prejudice" that "all" Muslims are terrorists was never presented as a situational premise on that show. Neither would such "prejudices" be characteristic of "blue collar" Americans.

The solution is to fine and jail employers who hire undocumented immigrants. Better than a physical wall. An economic one. But expect to pay more for your strawberries.

Actually, that "fact" IS disputable. The reason business owners hire illegal immigrants is that they can't find people who want to work at the jobs. No one is lining up for jobs at the rendering plant.

Better yet, feature all these people and these TV networks will ensure the re-election of Trump.

Rosanne Barr has been a bigot for years, usually on the extreme left (she ran for Green Tea party presidential candidate and lost), and criticized Bernie Sanders for meeting Pope Francis, since the pope "owns almost every dollar in the world." She has long claimed 9/11 was an inside job, a delusion she holds with her equally nutty friend Rosy O'Donnell. For an account of her craziness before this event, see https://www.nationalreview.com/2018/04/roseanne-barr-views-risky-for-trump-supporters/

ABC did the right thing cancelling her show and TBS needs to cancel Samantha Bee for what she said on her show. But, Bill Maher used an ape reference for Donald Trump and is still around. Lot's of double and triple standards going on.

You might want to re-check that Bill Maher reference. When Donald was running around claiming that Barack Obama was born in Africa & wasn't a US Citizen & needed to PROVE by showing his birth certificate that he was born in the US & that he needed to PROVE his Harvard credentials by showing his transcripts (the guy who won't show his tax returns by the way), Bill Maher challenged Trump to prove that one of his parents was not an orangutan. It was satire. Bill Maher also said he would donate to charity if Donald Trump could prove his parentage. Donald Trump has yet to prove his parentage. I guess it only matters if one of your parents came from Africa.

Many of the comments on this article are unworthy of people who read a Jesuit magazine. Using terminology like immigrants "stealing American jobs" suggests an immaturity of understanding the marketplace - Do people who work for less than someone else is paid "steal" the job? Charity is lacking - as well as misunderstanding the American Experiment, and the Jesuit mantra of seeing God in everyone and everything - maybe particularly the less fortunate.

Very disappointed that McDermott did not talk about the real double standard of ABC: punishing Roseanne's trash talk about a liberal political figure, and tolerating non-stop trash talk directed towards conservative ones.

It is good when America promotes "the good" over the bad as in this case. But why did we have to wait for a right of center show to be the example. Surely Mr. McDermott watches all those other shows that are unabashedly critical of the right. Maybe he does not notice hypocrisy when he sees it? Maybe he considers divorce, single parent families, same sex parenting, cohabitation and all the explicit sexual material shown on TV - is "normal." If that is the case I would like him to advise us what is not normal - just so I know in order to be polite.

I notice that the author's main point is not acknowledged by any commenters so far.

It's sad to see in the comments section of a Catholic magazine the number of "what-about-ism" or defensive comments.

Rosanne Barr compared another African American woman to an ape a few years back. Rosanne Barr offered the SAME "apology" (I didn't know...). Someone who is that free with racist comments should never have been hired. Of course, she should be fired. And that's even without her strange accusation that a 13-year old Jewish boy whose family had to hide their identities during the Holocaust is a Nazi. And that his relatives married a Clinton. She would be better served in rehab & intensive therapy.