Review: ‘The Nun’ highlights the fear of losing one’s faith and identity 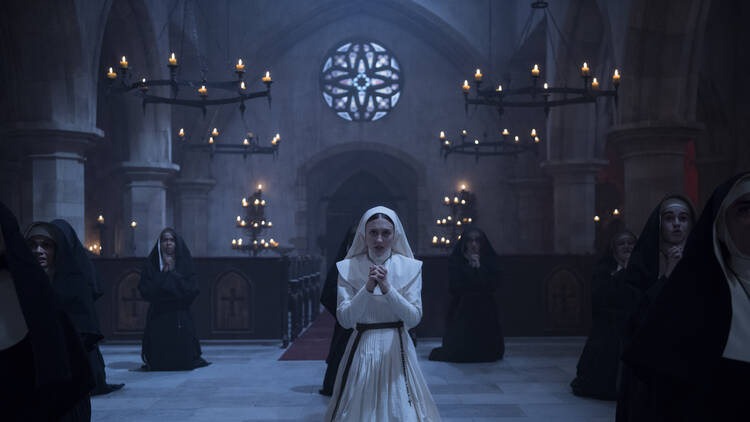 “The Nun,” the new demonic-possession film from director Colin Hardy and the fifth installment in “The Conjuring” universe, is not a good movie. It is thoroughly mediocre. The script is forgettable except when it is clumsy (“I’m still just a novitiate” instead of the much more common “a novice”; the nuns “take our vespers” instead of “pray vespers”). The film is depressive without attaining poignancy, and self-serious where it could be shameless. The most interesting thing about “The Nun” is the way Catholics on Twitter used its social media promo hashtag, #TheNun (accompanied by an emoji of a menacing, eyeless nun) to tag stories of actual women religious.

And yet…. Inside this desultory, semi-spooky film, there are lingering images and ideas that hint at the better film that could have been.

This is the movie’s true monster—the possibility that self-surrender in the monastery and possession by a demon are basically the same thing.

“The Nun” is set in 1952 and concerns the Vatican’s investigation of ominous reports about a women’s monastery in Romania. Our investigators are Father Burke (Demián Bichir), an exorcist with the usual Hollywood backstory of a failure he fears he will never be able to redeem, and Sister Irene (Taissa Farmiga), a dewy novice. We know she will be the heroic voice of wisdom because we first see her teaching English schoolchildren that Mother Superior is wrong and dinosaurs did so walk the earth. (This importing of American Protestant controversies is, like the total absence of Orthodoxy from the film’s Romania, an example of the film’s flattening of all Christianities into one semi-Catholic lump.) They arrive in Romania and acquire a local guide nicknamed Frenchie (Jonas Bloquet). He tries to spark Sister Irene’s romantic longings, but their tepid flirtation never rises beyond the perfunctory.

The nun, priest and civilian make their way to the isolated monastery. They pass through a spooky graveyard, where Latin-style crosses jut at artistic angles. (Lots of weirdly positioned Latin crosses and an overactive fog machine are this movie’s aesthetic, which is not a criticism—I love a carnival “dark ride” as much as the next person.) They enter the monastery, ruled by a nun who wears a black cloak that shields her face and sits on a creepy throne decorated with an ouroboros. And they begin to learn the monastery’s secret: The perpetual prayers of its nuns have held back a terrible old evil, locked behind a door with a Latin inscription meaning God Ends Here. But the evil has broken free….

There are two thematic elements that stand out in “The Nun.” The first is the repeated imagery of suicide. At first I thought this was a misplaced tribute to the ending of “The Exorcist,” as if the climactic action of that film represented a heroic defeat of the Devil rather than a capitulation to him and a failure to trust in God. “The Nun” is not aiming for the spiritual or emotional honesty of “The Exorcist,” and so it cannot portray (or silhouette, by showing where it is not) trust in God. Toward the end, “The Nun”talks a lot about the power of prayer, and even “the sacrifice of the Eucharist,” but the film’s climax focuses on gathering what are basically magical objects and throwing them at a demon. Still, if I understood the tangled plot correctly, it does ultimately depict “heroic suicide” as a demonic lie. This is a heavy film, freighted with the horror of the real-life rise in suicides, and to the extent that “The Nun” speaks to our real lives, it depicts suicide as the conquest of faithful and decent people by an external enemy.

“The Nun” is about fear of submission; fear of betrayal, of being abandoned and destroyed by God and the church who promised to save you.

“The Nun” comes closest to a complex depiction of the fears and hopes inherent to faith in its subtle (though I don’t think accidental) comparison between two forms of loss of identity: religious vows and possession. This pairing even infiltrates the movie’s marketing: The theater where I saw it had a cardboard display where you could take a selfie with your own face fitted into a hole in a lineup of scary faceless nuns.

The movie’s one real shiver—the moment when we touch something uncanny, unexpected and uncontrolled—comes when an old-fashioned radio begins playing a pop song in the middle of the night. This is a standard horror trope, but “The Nun” deploys it with unusual elegance. The radio looks eerily like a wimpled nun, and the song it plays is the 1950s romantic classic “You Belong to Me,” which in this film becomes a stalker’s anthem to rival “Every Breath You Take.”

This is the movie’s true monster—the possibility that self-surrender in the monastery and possession by a demon are basically the same thing. “The Nun” is about fear of submission; fear of betrayal, of being abandoned and destroyed by God and the church who promised to save you; fear of giving yourself, body and soul, in the hope that this plunge into God will strengthen you instead of destroying you.

And so the final question is not whether our heroes will find the holy tchotchkes in time. It is whether Sister Irene will make her final vows—and whether these vows will be her triumph or her swoon into the jaws of the monster. Toward the beginning of the film, she and the priest rarely wear their religious “uniforms.” But for the final confrontation she dons her beautiful white habit. She decides to face the demon armored only in the sign of her surrender.

it was an excellent movie but there were lack of some sudden scary scenes. I mean it can be more but it was not. I got the tickets to the movie from Stubhub coupons codes that gave me big discounts.

I don't get "At first I thought this was a misplaced tribute to the ending of 'The Exorcist,' as if the climactic action of that film represented a heroic defeat of the Devil rather than a capitulation to him and a failure to trust in God. " Wasn't the priest's suicide at the end of The Exorcist a Christ-like sacrifice of his life for another, and therefore a triumph?