Review: ‘Hereditary’ is a harrowing look into mental illness and familial relationships 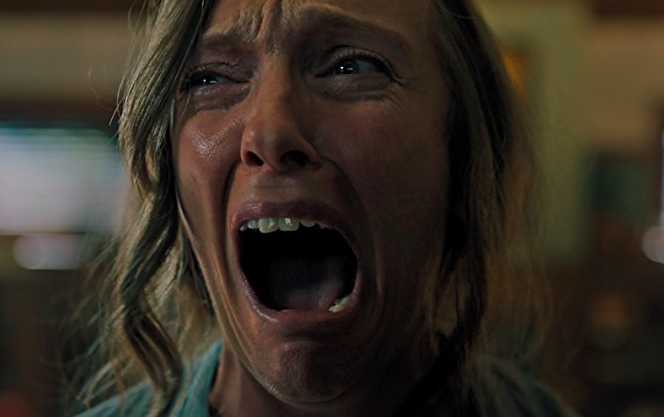 “Hereditary” is a tense and deeply sad horror film that asks incisive questions—and then makes the mistake of giving answers.

The movie, the feature debut of writer/director Ari Aster, opens with an obituary for Ellen Graham, a 78-year-old who died in her daughter Annie’s home. We then see a dollhouse-sized replica of a family home, which transforms into the real home of Annie (Toni Collette) and her husband Steve (Gabriel Byrne), son Peter (Alex Wolff) and youngest daughter, the captivating Charlie (Milly Shapiro).

Charlie is our first focus. She is lumpy-faced and withdrawn, and she was grandma’s favorite—which is no honor, given the ambivalent tribute Annie pays to her mom at the funeral. “It’s heartening to see so many strange new faces here today,” Annie says, and only her quiet voice eases the bitterness of this line. “I know my mom would be pleased, and perhaps a little suspicious, to see the turnout.”

“Hereditary” is a tense and deeply sad horror film.

Funeral gawkers weren’t the only things that made Grandma suspicious. Ellen Graham was stubborn, she kept secrets, she always had to be right and she created the kind of familial silences that usually hide something terrible. It feels, Annie says, “like a betrayal just to be talking about her.”

There are deaths that liberate a family. In an interview with radio host Marc Maron, John Darnielle of the indie band The Mountain Goats says that he was only able to write the autobiographical album “The Sunset Tree” after his abusive stepfather had died. And since he sang about his experiences of abuse, other survivors would come up to him at shows and talk to him about it. Darnielle told Maron that when this happens, “I’ll say, ‘Has your abuser died yet?’ They’ll say, you know, ‘No,’ and I’ll say, ‘I want you to be ready. ‘Cause it is, I mean I hate to say this, because you don’t wish death on anybody—it’s wonderful when your abuser dies. It’s wonderful. It’s like nothing in the world. It’s like you are free.’”

But “Hereditary” asks, What if death isn’t enough? An early scene in a high school English class scene invokes Sophocles to suggest that the characters here have no control of their lives: They are “pawns in this horrible, hopeless machine.” They are simply acting out the scripts encoded in their DNA. “Hereditary” explores a lot of angles of this despairing possibility. Steve knows Annie’s family history of mental illness, for example, and so his own concern about her increasing weirdness clearly angers her—she feels that he is throwing this inherited and unchosen pain back in her face. There is deep dread here, fears of being irrecoverably tainted, manipulated from beyond the grave and compelled to reenact parental wrongdoing.

This is cruel material, and few filmmakers would be able to stand up to it. Aster brings together plenty of brilliant pieces. The harrowed cast does a great job at showing a family breaking down under the pressure of its guilt and grief—Steve has a heartbreaking moment where he tries to ask his son about SAT prep, as if either of them are capable of caring. Both the dollhouses created by Annie, an artist, and the creepy junkyard toys crafted by Charlie are spooky and richly symbolic. The dollhouses, especially, fit with the film’s heavy reliance on squares and right angles, to suggest a house where people are obsessed with maintaining control. (“Shoes off, everybody,” the father reminds them as they come in.) The film emphasizes windows, doors and even a mail slot, as portals to “the other side”: the side from which the dead may speak, act—and punish.

The film’s central twist occurs fairly early, as a scene of white-knuckle suspense reaches a genuinely unexpected conclusion and the action skids to a stop. The camera holds on a close-up of one character, and gives both the character and the audience an unbearably long time to settle in to what has just happened. It is one of the most effective pieces of recent horror filmmaking I have seen.

The movie also calls our attention to many different details that might be clues—but they are clues in very different types of mystery. Is this a movie in which the shocking story of a sleepwalker’s near murder-suicide will be key to the film’s resolution, or is this a movie in which spooky pseudo-Latin and -Hebrew words scratched into the wallpaper will be the keys?

Unfortunately, “Hereditary” turns out to be the latter. The bond between Charlie and grandma, which seemed so central in the film’s opening, is forgotten. We never do find out whether the sleepwalking was a case of otherworldly evil, or an unconscious attempt to break free of that evil, or just random mental hiccups. The family’s emotional dynamics, so rich and complex throughout the film, are essentially irrelevant to its ending. Even the family dog gets a perfunctory resolution.

Since this is a horror film about a grieving mother who may be losing her grip on reality, it is hard to avoid comparison to “The Babadook” from 2014. That justly celebrated movie had one huge flaw: Underneath the terrifically creepy monster design and the gut-wrenching performances from Essie Davis and Noah Wiseman is a self-help moral about how we need to learn to live with our grief-monsters. “The Babadook” is shaped around its message to the point that it feels a little too tidy. “Hereditary,” in avoiding this tidiness, starts to feel unfocused.

Thanks for writing honest review. Enhance your performance with swim caps from SpeedoUSA. When you browse our swimming caps, you'll find the best fit and style for all your needs. https://reviewyoon.com/best-swim-caps-to-keep-hair-dry/

Almost any motorcycle can be used for touring, but there are some that are better than others. Specific models address particular needs, . https://bestfrontandreardashcam.com/best-camera-for-motorcycle-touring/

The date of Holi is different every year in India! In most of India, Holi is celebrated at the end of winter, on the day after the full moon in March http://whenisfestival.com/holi/