Review: ‘The Apparition,’ a thriller that’s also a great film about faith 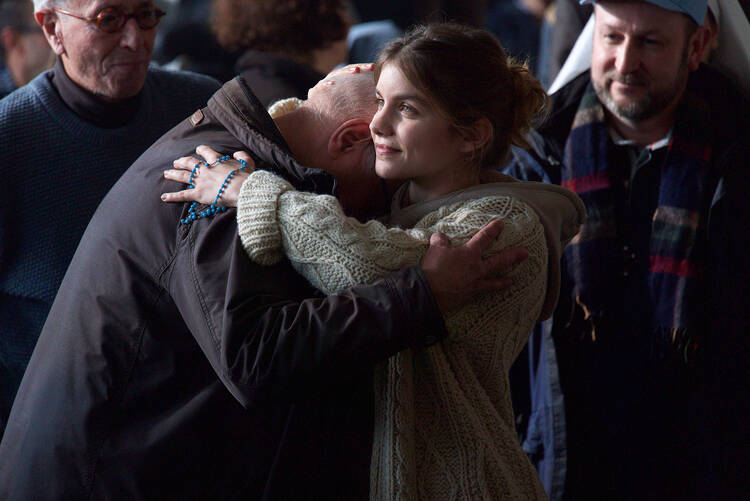 In “The Apparition,” a 16-year-old novice named Anna reports a vision of the Blessed Virgin (image: Music Box Films).

A bona fide thriller of faith, “The Apparition” is the best dramatic feature this critic has seen about spirituality, belief or even the church in years, and if you want proof...there is no proof. There is, however, mystery. Without which, the movie instructs, belief would be meaningless.

Written and directed by Xavier Giannoli (“Marguerite”), “The Apparition” is a procedural, though instead of investigating officers assigned to a case, we have Jacques Mayano (played by the soulful Vincent Lindon, star of innumerable French dramas), a war correspondent and veteran of numerous U.N. crisis zones. He has just lost his best friend and colleague to an explosion in what seems to be Syria, in an event that also damaged Jacques’s ears. He pours medicine (call it balm) into one of them at several points in the film, and that is a biblical tipoff to who is who in the spiritual allegory plane of “The Apparition.” (Keep watching that ear.) In terms of narrative plot points, it means he is on the disabled list.

In Xavier Giannoli’s new movie, an intrepid reporter is asked by the Vatican to compile a report on a reputed miracle.

Which means it is a good time for him to get a call from the Vatican. Two years earlier, in an out-of-the-way French village, a 16-year-old novice named Anna (Galatéa Bellugi) reported a vision of the Blessed Virgin. Officially, as it is explained to Jacques, the church prefers to let such claims go unexplored unless the response gets out of hand. And in this instance, it has. Pilgrims are rolling into Anna’s village by the busload; the local Franciscan, Borrodine (Patrick d’Assumçao), refuses to cooperate with any official probe of the matter, and a cleric named Anton Meyer (Anatole Taubman) has launched a full-scale marketing campaign aimed at the commercial consecration of Anna (whose image adorns votive candles, sweatshirts, posters and, most comically, snow globes).

Jacques’s reputation as an intrepid reporter has prompted the Vatican to ask that he compile a report on the reputed miracle. As the lay person on the official church commission dispatched to Anna’s village, he is also the viewer’s tour guide into some of the arcane aspects of “canonical investigations” into “supernatural events,” as well as a number of those events—Lourdes and Fatima, of course, but also the Marian apparitions at L’ile Bouchard, Garabandal and Medjugorje. All of which is strictly fascinating, as is the unfolding of Anna’s story. Is she on the level? Nothing in Mr. Giannoli’s film resolves itself the way one expects. At the same time, those looking for total satisfaction one way or the other may not find it.

“The church would rather bypass a veritable phenomenon than verify a scam.”

But as Jacques’s fellow investigator, Dr. de Villeneuve (Elina Löwensohn), explains, “If there were proof, there wouldn’t be a mystery”—and without a mystery, there wouldn’t be faith. What the film is asking throughout is whether all the scrutiny—of Anna’s story, her psyche and even her body (any evocations of Joan of Arc are strictly intentional); of the blood-soaked cloth she claims the Virgin gave her; of the various blind alleys Jacques goes down—really means that much, especially to those who accept the miracle for exactly what it is purported to be. “The church would rather bypass a veritable phenomenon than verify a scam,” Jacques is told by a Vatican colleague, and the church has our sympathy as viewers.

On the other hand, as Father Meyer points out, “the faithful will always be ahead of the church” in recognizing those supernatural events as real. What “The Apparition” does, amid its gripping storytelling—and the wonderful acting of Lindon and Bellugi and an ending that stuns—is make a case that all the efforts in the film to establish what is real are strictly beside the point.

Terrific, a movie that promotes the idiocy of phony apparitions. Like the Church doesn''t have enough problems.

Seems great. Will watch it for sure if its available on tvtap android app