Review: In “Memoir of War,” France suffers from the moral damage of World War II 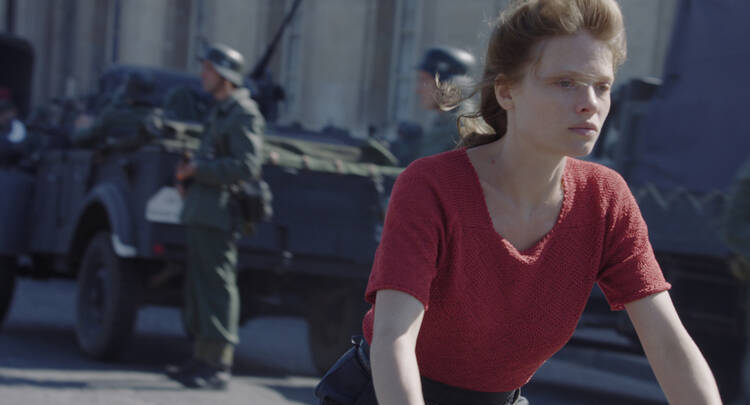 In “Memoir of War,” the director Emmanuel Finkiel presents his audience with a France still struggling with the emotional, political, psychological and moral damage inflicted by World War II, when its military defense collapsed in the German invasion and its administrative departments agreed to work for the enemy. Most of the country was governed by the Nazis, but, in many secret ways, families were split between those who passively went along with the occupying forces and those who, risking their lives, secretly met and organized the Resistance, confident that France would be free once again.

In “Memoir,” Finkiel tells the story of Marguerite Duras, who chronicled these years. She was from a family who lived in Saigon when Vietnam was under French control. She returned to France to study political science and became a novelist, playwright, screenwriter, essayist and experimental filmmaker. During the Nazi occupation she worked for the German-controlled Vichy government but secretly joined the Resistance movement.  In 1944, her husband, the writer and Resistance member Robert Antelme, was discovered and sent to Dachau.

The film tells the story of a woman who worked for the German-controlled Vichy government but secretly joined the Resistance movement.

Duras is played by the beautiful Mélanie Thierry, one of France’s leading actresses. Finkiel gives us a somber city and very little of the “gay Paree” nightlife and joy. He shows us Duras’s grim trodding or biking through the crowded streets. She wanders from her desk to her window, where she stares out hoping or imagining that Robert will emerge from the gray mob. There is a knock at the door. She approaches and opens it slowly. A blurred figure wearing something like a uniform emerges from the dark. They embrace, she weeps, he is gone. She has imagined that Robert reappears.

Enter Rabier, played by Benoît Magimel, a man who likes her and showers her with gifts such as books and coffee. He is French, but a Nazi, and he offers his services helping her find Robert. The war is coming to an end, the Allied army is marching on France and the Nazis are emptying their prison camps, either allowing some to go home or massacring prisoners by the thousands. Of course Marguerite wants help in finding Robert, but inevitably Rabier will want something in return, like a word on where other Resistance members are hiding. Her Resistance comrades are uncomfortable with their relationship.

Nevertheless, Dionys, played by Benjamin Biolay, is her friend and willing to trust her. He senses the depth of her love for Robert, a power that keeps her going day by day. He consistently gives her honest advice because he sees that she is coming apart. We know that Dionys must love her, but the love gives him strength to serve her in her psychological crisis. If Robert is alive, why has his name not appeared on the lists of those on the way home? We join her as she roams through Paris streets turning her head every way as French men in ragged uniforms stagger back. Again the camera blurs the background.

Review: The ghosts of World War I haunt a French farm in ‘The Guardians’
Raymond A. Schroth, S.J.

Review: A vineyard divides, then unites, a family in ‘Back to Burgundy’
Raymond A. Schroth, S.J.

Indeed, how much should we trust the camera? Several times when Marguerite is alone in her apartment or when the phone rings or there is a knock at the door, Marguerite herself is visible in two different parts of the apartment, one vision less clear than the other. At a key moment in the film, an elderly Jewish woman, Madame Katz, played by Shulamit Adar, whose daughter has been a captive, receives word that she has died. Is this to prepare Marguerite for similar news? Or is it to remind the viewer that “Memoir of War” is not about Marguerite as much as it is about France?

Suddenly Rabier appears with promises of new information. A group of fiddlers parades through the café playing Strauss waltzes. The war has ended. Dionys stands by. Marguerite is informed that former prisoners now hospitalized know Robert. She must rush to see them. At the same time she begins to question the validity of her own love. The audience knows—though no one has said it—that Dionys is more than just a colleague. For about three seconds the screen shows us a new-born child in tears. But was that the same as the vision of the young man in the darkness of her doorway? In the last scene we are at the beach and the grey skinny shadow of a young man emerges and walks delicately into the sea.