Review: The ghosts of World War I haunt a French farm in ‘The Guardians’ 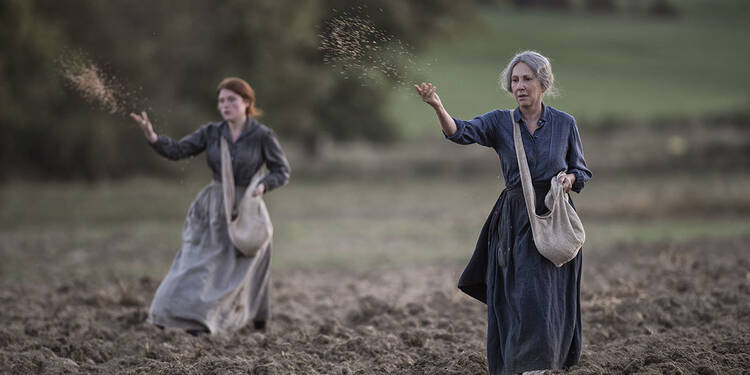 Nathalie Baye and Iris Bry in ‘The Guardians’

Sometimes when watching a new film from France I get the idea that the directors and scriptwriters are all influenced by one another. The same scenes and plot devices are popping up: a farm in trouble because the owner had died or is away in World War I; women—a widow or daughter—pitch in, take charge; a daughter loves a soldier; a crisis develops when the crops—wheat or grapes—must be harvested; U.S. soldiers on leave cause trouble; years pass—we know because it snows; God is worshipped, sometimes, but why didn’t he answer the prayers? Somehow the farm must change, adapt to the new economy. Who will marry whom—if anyone?

Xavier Beauvois’s film is based on a novel by Ernest Perochon, with a lot of its misery, disease and death left out.

Xavier Beauvois’s “The Guardians” is based on a novel by Ernest Perochon, with a lot of its misery, disease and death left out and its many children reduced to a few. A few classic actors carry the thematic load, and the 23-year-old Iris Bry plays Francine, who is hired to do the farm work of a son who has just died in the war. But the central character is the old farm itself, a collection of buildings unchanged since 1914. The sun lingers over it as the world goes by, and the deep brown tones of the walls reflect the internal battles in the souls who live there.

The heroes are the women. The mother, Hortense (Nathalie Baye), is in charge. Her daughter is Solange (Laura Smet). A son, Constant (Nicolas Giraud), is killed in battle. Another son, George (Cyril Descours), is the romantic lead. The Angel of Death, who appears twice, is an old man in a black suit with a white beard. Suddenly, he is here! Without a word he approaches the character most wounded and embraces him or her as tears flow.

The central character is the old farm itself, a collection of buildings unchanged since 1914.

Francine is an orphan: no family, no home, but she is a skillful housekeeper and has worked her way into the permanent embrace of the family. Her first act is to nail a crucifix to her wall. The film’s religious atmosphere is strong and realistic. And the hymns at the memorial services (often corpses are not returned home) signify a valid faith. She and George have been exchanging letters and taking long walks in the woods, where he shows her his favorite beautiful spot. Soon, back in her bedroom, they have sex. Indeed the sexual tension has tightened since groups of U.S. soldiers have been stopping by to help with the harvest.

George has been enduring horrible dreams. He mans a machine gun as Germans wearing gas masks attack. They pour out of the woods a few yards in front of him, and he mows every one down. The German dead pile up, but one last survivor attacks George, and they wrestle to the death as George stabs him again and again. George pulls off the German’s gas mask and glares at his face. The dead German’s face is George. George has been killing himself.

Review: A vineyard divides, then unites, a family in ‘Back to Burgundy’
Raymond A. Schroth, S.J.

Review: A Christian town faces its sins in post-war Hungary in “1945”
Raymond A. Schroth, S.J.

The plot goes into reverse as Hortense calls Francine in, accuses her unjustly of having sexual relations with the Americans and sends her away. She finds another nice home but discovers she is pregnant. 1918, 1919 and 1920 pass. The farm has prospered because they bought a tractor that does the work of a dozen men and women. We see George walking through a bustling city street, and then he hears a voice singing in a cafe. We are not told what happens next.