Review: A vineyard divides, then unites, a family in ‘Back to Burgundy’ 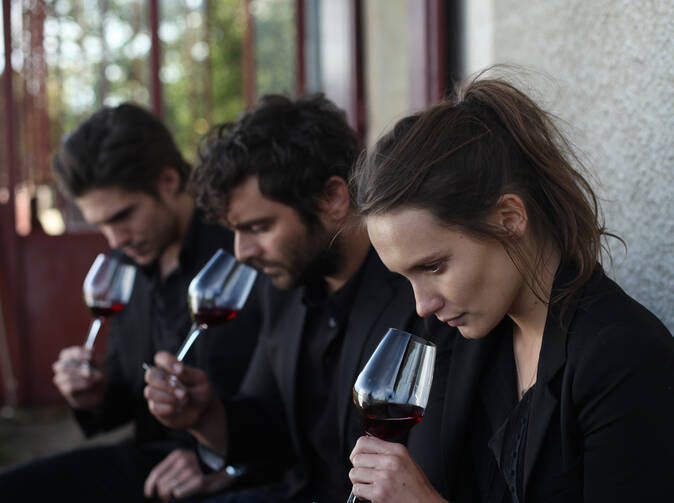 A bunch of grapes has a way of demanding our attention; grapes can pull us out of ourselves, dragging our imaginations out over the rolling lines of a vineyard, down one green hill and up another all the way to the horizon. Perhaps their mystical power, when transformed into wine, emanates originally from the New Testament, where Jesus sends his disciples into the fields to harvest the grapes that will become his presence on our altars and in our hearts.

Wine has flooded our tables, our social lives and our minds—and the arts, especially French films. A few years ago the ideal French wine film was “You Will Be My Son,” the story of a selfish and brutal father who owns a vineyard and is growing old and has no love for his son.

Fans who loved “You Will Be My Son” should enjoy “Back to Burgundy,” written and directed by Cedric Klapisch, well known for French films and television about young men and women exploring adulthood, who, I am certain, has learned from “You Will Be My Son.” Like that film, “Back to Burgundy” is about family tensions, boiled up by both the financial and artistic challenges of the wine business.

“Back to Burgundy” is about family tensions boiled up by both the financial and artistic challenges of the wine business.

The owner’s son Jean (Pio Marmaï) strides down the country road, after 10 years traveling around the world to escape the ruthless domination of his father. He is now returning from Australia, where he owns a vineyard—just in time to see his father die but too late for them to talk and reconcile. The father has left the vineyard to his two sons and daughter. Ten years of alienation must melt.

The younger son, Jeremie (Francis Civil), has married the daughter of a neighboring very successful wine grower; and the sister, Juliette (Ana Gerardot), assumes the responsibilities of running the business. She is, in many ways, the film’s strongest character, while Jean, the oldest, is described as the family “black sheep.” “Where were you five years ago when our mother died?” Jeremie barks at Jean in the first minutes of their reunion.

From time to time the film takes on the style of a documentary. Above all, Klapisch shows his determination that the art be authentic, so he signed on Jean-Marc Roulot, a real-life Burgundy winemaker, to play the role of Marcel, the estate’s manager. This helps the director to make a film about wine even though what he really wants to do is talk about family. So the characters follow the production of wine over the course of one year, while Klapisch still follows the lives of human beings as children, adults and parents.

We viewers are present as the characters and large teams of workers move meticulously through the fields, break off buds and nibble them, clip plants, nibble them again months later as they become grapes. What do they learn from each nibble? How do we time the harvest? What if it rains?

Review: ‘Vazante’ offers a look into the history of slavery in Latin America
Raymond A. Schroth, S.J.

We join the loyal workforce, all young men and women, as they harvest everything, dump the grapes into trucks, unload them into barrels, set the barrels in the barns, take off their shoes, socks and long pants and jump into the vats and methodically crush the grapes, turn them into liquid, bottle the wine and begin to taste. We watch anxiously as Jean, Juliette and Jeremie, seated together, sip the new wine and turn to each other for judgment. We are also present when Jeremie’s three young children test and judge their grandfather’s new wine with the same seriousness as their 30-plus-year-old neighbors.

All this is somewhat interesting, but, emotionally, interest is higher when the mother of Jean’s young son brings the boy from Australia to see his father, when the two estranged brothers learn to truly love one another, and the sister has led them all to a successful harvest and the wine will be good.