Review: In “Far From the Tree,” parents cope with children utterly different from themselves 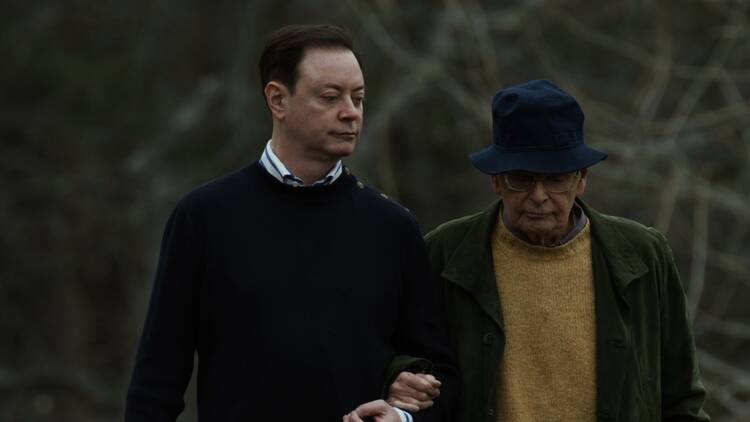 Author Andrew Solomon and his father, Howard Solomon, in Rachel Dretzin’s documentary "Far From the Tree." (Courtesy of Sundance Selects.)

Did Joseph and Mary love Jesus because he was the Son of God? Or in spite of it? Was the Holy Family principally holy? Or principally family? Jesus was adored, of course. But he was also loved. And nothing in the Gospels suggests he was an easy kid.

Neither are the key characters in “Far From the Tree,” Rachel Dretzin’s documentary adaptation of Andrew Solomon’s much-honored book about how parents contend with, and continue to love, children who are utterly different from themselves. So different, in some cases—for reasons physical, mental, sexual or even criminal—they call into question who and what that a family is.

The most awful episode involves a family whose teenaged son killed an 8-year-old child, and how they contend with that horror.

Solomon, whose book was subtitled “Parents, Children and the Search for Identity,” used the term “exceptional” to refer to children with “horizontal identities” that arise from the “recessive genes, random mutations, prenatal influences or values and preferences that a child does not share with his progenitors.” Nothing so clinical is addressed directly in Dretzin’s film, which is more focused on the people than on their psychology. A movie not being a book, Dretzin also had to make decisions about which “problems” to address and which to omit.

For instance, there is nothing here about the conflicts inherent in having a deaf child, which would have been a ripe area given the deaf world’s often militant regard for its culture. (The film does deal with “dwarf pride,” however.) And in the book, Solomon interviewed a mother whose child was conceived by rape and who cannot bear to let her daughter touch her; in the film, the most awful episode involves a family whose teenaged son killed an 8-year-old child, and how they contend with that horror. Mostly, though, the movie likes to stress success.

Some of the things the film’s subjects have to contend with are entirely about societal acceptance. But others are profoundly physical or intellectual.

And because it is essentially about love, it becomes a thoroughly moving journey, one piloted by Solomon himself. A lecturer and writer on psychology and the arts and the author of The Noonday Demon, a National Book Award-winning memoir about his struggles with depression, he appears at various moments throughout, recalling his own childhood. “I was a weirdo,” he says. More critically, he was gay, something about which he expected his parents to be brutally disappointed. “And they were.”

How he—and they—grappled with Solomon’s sexual orientation was somewhat tortured, and Solomon implies it was all about bad cosmic timing: The shifts in society’s attitudes toward gay people over the last several decades, he says, have been “almost unimaginable.” That epic shift now calls into question our attitudes toward other so-called disabilities and congenital challenges. “How do we decide what to cure,” he asks, “and who to celebrate?”

As their parents get older, who will care for people with disabilities?
John W. Miller

My daughter has a disability. I don’t want Jesus to ‘fix’ her.
Heather Kirn Lanier

There is a bit of cognitive discord generated by the fact that Solomon (and Dretzin) are fashioning an equivalency between Solomon’s sexual orientation and, say, autism. Or dwarfism. Or Down syndrome. Some of the things the film’s subjects have to contend with are entirely about societal acceptance. But others are profoundly physical or intellectual. Jack, for instance, is a boy with severe autism who is eventually mainstreamed at school and benefits from enlightened parents, enlightened treatment and, quite clearly, an enlightened school system. But would anyone prefer to be Jack rather than, say, Andrew Solomon?

The same question arises when the film visits the Little People of America convention, where the subject of a “cure” comes up. Medical science is developing a way of preventing achondroplasia, which causes most dwarfism, and the idea that they have to be “fixed” rankles many in the membership. A dwarf couple expecting a child are conflicted about who that child is going to be. Still, they will love it, just as their parents—whom we meet—love them.

Perhaps a bit predictably, Solomon quotes Tolstoy’s opening line from “Anna Karenina” (“all happy families are alike; every unhappy family is unhappy in its own way”) and says he used to believe it. What he finds more remarkable now, having done his study and found his own bliss, “are all the different ways people find to be happy.” It isn’t easy. Neither was Jesus.

The hardest circumstances throughout my life in which I swung to God out of the blue as a grown-up Essay Writing online I welcomed Christ into my life and It was on April 28, of this current year bemoaned and shouted out to him for quite a long time and he gave me a blessing past clarification needed to do just to live for him.

I have likewise observed many children who are prepared to satisfy exclusive requirements. The rationale is that the fruitful parents cope with children have encouraged a situation that encourages achievement consequently the children ought to have the capacity to achieve the level of accomplishment they achieved Essay Help UK and possibly surpass it.