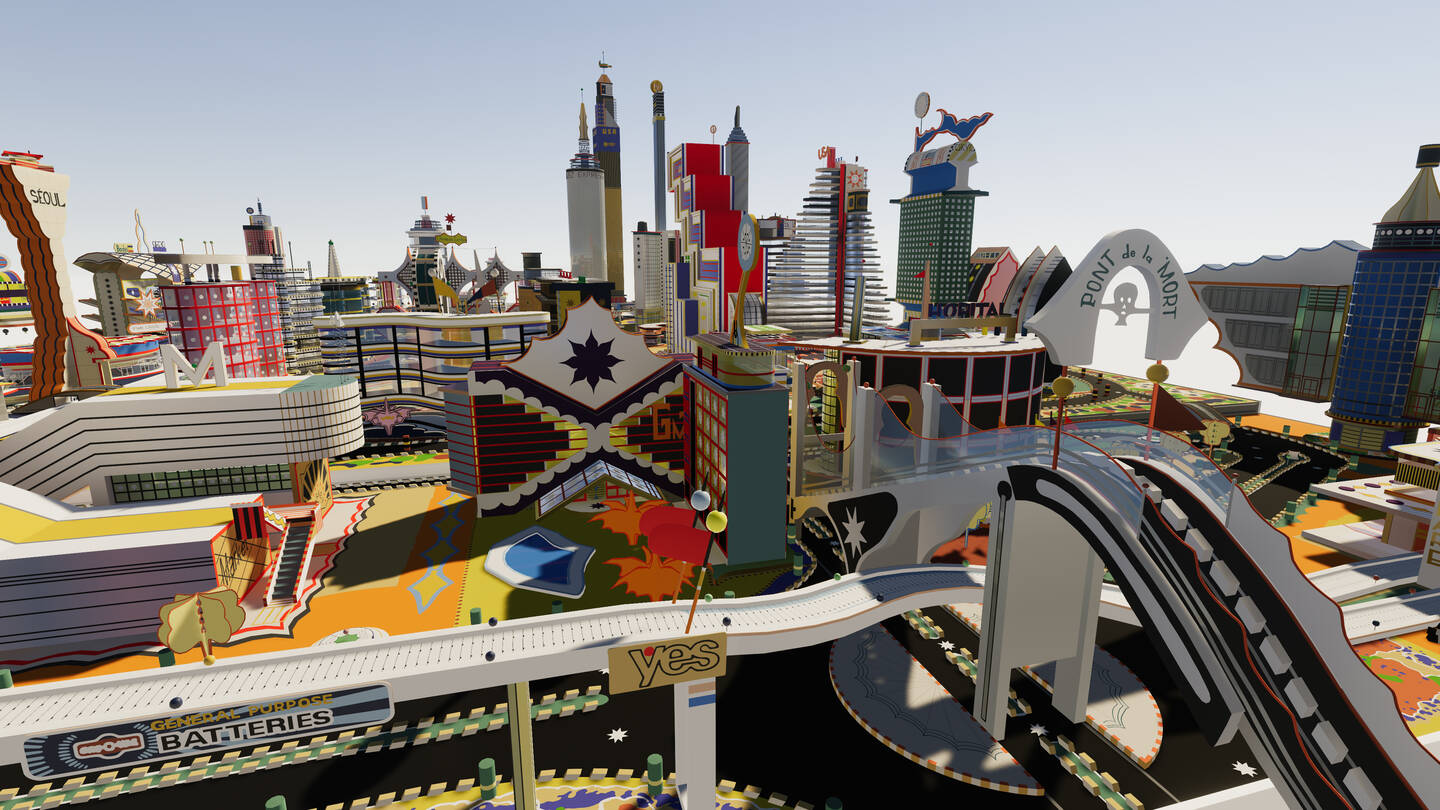 In 2013, two years before he died of a cancer first diagnosed in 2000, the Congolese artist Bodys Isek Kingelez lamented to a journalist that in his home city of Kinshasa, “no one knows who I am or what I do.” It was in fact true that the artist Chéri Samba and the pop musician Papa Wemba were better known at home and abroad. But for a good quarter-century, since a brilliant appearance at a landmark exhibition in Paris, Kingelez had been a fixture on the international art scene. Now, with a first full and extraordinary retrospective of his work in the United States at the Museum of Modern Art, “Bodys Isek Kingelez: City Dreams,” he is receiving his full due. And you will never have seen anything like it before.

Arising—appearing or materializing might be better words—on white ovoid forms positioned at various levels in the Philip Johnson Galleries at the Modern are some 33 delicate creations, chiefly in different kinds of paper that range in size from small buildings a foot high to entire cities on platforms that measure as large as 18½ by 8 feet. Some are shown on revolving disks, heightening the sense that you are circling the sky to view them. But they are not buildings or cities such as you have ever seen or imagined. (“Since time immemorial,” says the astonishingly self-confident artist in a film interview included in the exhibition, “no one had a vision like this.”) Forget for now Frank Lloyd Wright’s models for cities of the future in his Prairie Style or Mies van der Rohe and the International Style. Long now instead for more color and decoration, surges of symmetry, delicate tracery embellishing solid forms, buildings scalloped and syncopated, hugging the ground and piercing the sky, studded with diamonds and stars, a world of peace and prosperity not to be built but dreamed of. (The installation itself, in collaboration with the German artist Carsten Höller, is a work of art.)

“He who follows His example, he who paints as He does, will be blessed," Kingelez once said. “And that’s why I am a small god.”

Bodys Isek Kingelez (BO-dis EYE-zek KIN-guh-lez) was born in 1948 in the village of Kimbembele-Ihunga, 370 miles southeast of Léopoldville (now Kinshasa), the eldest of nine children of farm-workers Maluba Abraham Kingelez and Isek Mabo Bendele. Christened Jean-Baptiste, he was educated by Belgian missionary priests and imbibed a profound if not very systematic religious sense. In a later “Artist’s Statement” from 2005 he wrote: “No one could beat the strength of God that worked in me.” And further: “God has shown us that He himself is an artist. He painted the mountains, He painted the plains…. It is our duty to follow in his example. He who follows His example, he who paints as He does, will be blessed. And that’s why I am a small god.”

An excellent student, Kingelez finished high school at 22 and moved to Kinshasa. It was to be his home for the rest of his life. The Republic of the Congo had declared independence 10 years earlier and was briefly led by the democratically elected Prime Minister Patrice Lumumba, who was assassinated soon after his election. One of his opponents, who became known as Mobutu Sese Seko (a Bantu name such as he soon required of all his countrymen), proclaimed himself president in 1965 and set to work asserting the authentic African character of the country and the hardworking, self-reliant nature of its people (slogans that actually became official policies known as authenticité and salongo).

In 1978 he experienced what he called an obsession to get his hands on “some scissors, a Gillette razor, and some glue and paper.”

In the burgeoning capital Kingelez attended the University of Lovanium (now the University of Kinshasa), studying principally economics but other subjects, like industrial design, as well. Teaching subsequently at a secondary school left him dissatisfied, and in 1978 he experienced what he famously called an obsession to get his hands on “some scissors, a Gillette razor, and some glue and paper.” He made a little house and then a second work, “Musée National,” which he took to the Institute of National Museums. The staff there could not believe the piece was his, but when he created another directly in front of them, he was hired as a technical restorer for the museum’s collection, a position he held for the next six years.

Privately he labored tirelessly on his work. Two untitled pieces from 1980 in the exhibition, representing municipal buildings, demonstrate his use of monochrome paperboard given accents of color by found wrapping paper. An astonishing creation from 1980, shown in a photograph in the blazing bright exhibition catalog, is called “Cité du 24 Novembre de l’Authenticité Africaine” and anticipates the artist’s later sculptures of cities. It celebrates Mobutu’s seizure of power in 1965 and has a wide range of structures, including a charming church of which a variant from 1982 is in the show.

The art scene in Kinshasa at the time included the Académie des Beaux-Arts and several groups of painters—one emphasizing indigenous themes, another with a more Western, largely figurative style and, since the 1970s, the appearance of the “popular painters,” who drew on daily life to produce bold, personal imagery that became internationally known. Kingelez, who never set foot in an art class, avoided the influence of any of them. (He was, however, indeed indebted to the cityscape around him, the legacy of Art Deco buildings left behind on Kinshasa’s broad boulevards by the Belgians and then the grandiose, nationalist projects that Mobutu commissioned from architects like Olivier-Clément Cacoub and Fernand Tala-Ngai.) Critics searched for ways to describe his works—architecture in paper, hybrid unions of architecture, painting and sculpture, “propositions” as exercises in possibility. He himself called them “extrêmes maquettes” and proclaimed himself “a designer, an architect, a sculptor, engineer, artist.”

The transformative event in his life was the Paris exhibition in 1989, “Magiciens de la Terre” (at the Pompidou Center and the Grande Halle de la Villette). Led by Jean-Hubert Martin, it ambitioned a truly global contemporary art. “Our final concern,” said Martin, “is with exchange and dialogue, with understanding others in order to understand what we do ourselves.” Six of Kingelez’s sculptures were shown, including three made on site. The spirited “Paris Nouvel” (1989) is tricked out in the colors of the French flag, while the more sober “Allemagne An 2000” (“Germany in the Year 2000”), made the year before, alludes to the colors of both the West and East German flags. The artist was able to stay in Paris for six months (his first trip outside Congo) and there also created “Bel Atlas,” a riff on the Grande Arche de la Défense, built in 1989 for the bicentennial of the French Revolution, and the exuberant “Stars Palme Bouygues,” whose brilliant inverted pyramid subtly rebukes the builders of the Grande Arche for the stiffness of their design.

Kingelez had a profound civic sense, displayed perhaps especially in “The Scientific Center of Hospitalisation the SIDA” (French for AIDS).

The avant-garde businessman and philanthropist Jean Pigozzi was blown away by Kingelez’s work and began to collect him in depth for what was to be his Contemporary African Art Collection in Geneva. And the artist was soon being shown regularly throughout the world, with exhibitions in Berlin and Paris and participation in such major events as the Johannesburg Biennale (1997), the landmark exhibition “The Short Century: Independence and Liberation Movements in Africa, 1945-94” (2001), the São Paulo Biennale in 2002, and that year also documenta 11 in Kassel, Germany. His internationalism was evident in pieces titled “Palais d’Hirochiima” (1991), “Canada Dry” (1991), “Miss Hotel Brussels” (1992), “Centrale Palestinienne” (1994), and “Nippon Tower” (2005)—all in the exhibition but none about a country the artist ever visited. He also had a profound civic sense, displayed in “Industria da Pharmacia” (1992), for example, and perhaps especially “The Scientific Center of Hospitalisation the SIDA” (French for AIDS), created in 1991 when an AIDS epidemic raged among an estimated six to eight percent of the population of Zaire.

With the means to buy a wider range of materials, Kingelez also expanded his horizons and began to make clusters of buildings that started with a tribute to his home village, “Kimbembele Ihunga (Kimbembele Ville)” in 1992, a tightly constructed complex built around the intersections of “Bvd Isek” and “Bvd Kingelez.” The following year he began work on a much grander dream, his village fully transformed into a city, “the monument of Kimbéville…presenting what…is on the way to becoming a reality.” Think of a public building—train station, soccer stadium, church or restaurant—and it is here (though not private residences, which he never sculpted). Sarah Suzuki, who organized the exhibition, describes the piece as “a kind of self-portrait, a mapping of the people and places that shaped him.”

Still more ambitious was the artist’s largest “city,” “Ville Fantôme” (1996), with buildings that rise as high as four feet on a platform that is more than 18 feet long and almost four feet wide.

Kingelez wrote of it: “There is no police force in this city, to protect the city, there are no soldiers to defend it, no doctors to heal the sick. It’s a peaceful city where everybody is free. It’s a city that breathes nothing but joy, the beauty of life.” It is indeed a prophet’s Heavenly Jerusalem, and you can take a virtual tour of it with headsets provided by the museum.

As the artist’s cancer made its appearance, his productivity began to decline. But there was another cityscape, “Ville de Sète” (2000), especially charming thanks to its seaside setting. And in response to the 9/11 attacks on New York, he produced in 2002 “New Manhattan (Manhattan City 3021),” which is in the Pigozzi Collection in Geneva.

Late in his career Kingelez claimed to have made over 3,000 works. That number may be an exaggeration, but Ms. Suzuki tells us that she herself has seen “over one hundred or so single works and eight cities.” Throughout, he loved both form and color (in his work and his own dress), skyscrapers and the pulse of city life, with a conviction of the importance of “models” that reminds of Plato’s ideas. Deeply committed to the welfare of society, he nevertheless resisted protest against the increasing corruption of the Mobutu regime, offering only an indirect critique with a sculptural homage to the United Nations in 1995. Instead of entering the vibrant social life of the capital, he stood aside, with three wives and a number of children, becoming increasingly reclusive but secure thanks to his astute real estate investments. A singular genius, he has left us, as the Modern’s remarkable retrospective reveals, a socially perceptive, highly contextual art that nevertheless transcends political and aesthetic categories alike—not to mention that the work delights you as if you were a child again.