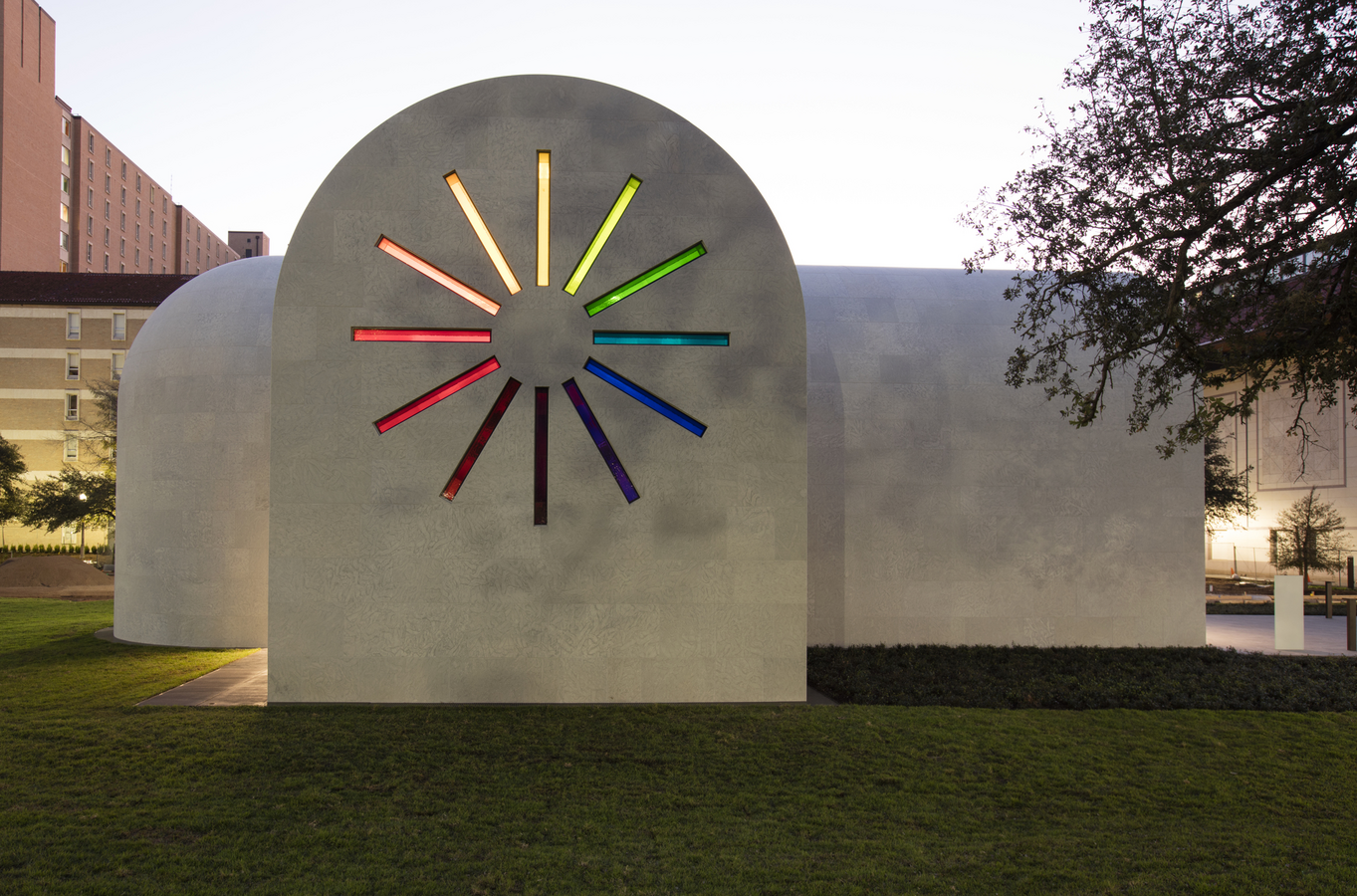 On a sunny Saturday afternoon inside “Austin,” the limestone-clad building designed by the artist Ellsworth Kelly, a young woman walks up to an arc of lime-green light that is cast through a narrow stained-glass window and onto the floor. She holds out her hand and turns it this way and that, admiring how it looks in the light. Then she takes a few steps, and a beam of magenta illuminates her face. A friend takes her photo.

Inside the building, which recently opened on the University of Texas campus, dozens of people roam the barrel-vaulted interior, which is laid out in the shape of a Latin cross. Virtually all of them are looking at their phones. They photograph the light. They chatter in groups while scrolling through pictures. A couple dressed for a night on the town hand a phone to a stranger and pose for a picture in front of the 12-spoked, minimalist rose window in the western arm of the transept. People sit on the floor, comparing Instagram filter settings. I take a panorama of the whole place.

Kelly originally designed the building for a private site in the 1980s, but it was only built after the university’s Blanton Museum of Art acquired the design in 2015, shortly before the artist’s death. This artwork feels as if it were always meant to be public and to exist in the age of Instagram.

“Austin” has all the trappings of a chapel, but it has no official religious function.

“Austin” has all the trappings of a chapel, but it has no official religious function. It is a Romanesque church stripped down to its barest aesthetic essentials—a temple to aesthetic joy that provokes questions about how we experience art and spirituality today.

It is also the culmination of Kelly’s entire career. Spectra, totems and black-and-white panels have been prominent in Kelly’s work for decades. In “Austin,” they all interact with each other and with time as the sun crosses the sky and shines through three window designs in succession.

The light is everything in “Austin.” Over the course of my visit, the green and magenta on the floor gradually faded, and violet and yellow appeared. The four colors made a wobbly X, the shape of a chromosome. Wider, secondary stripes were reflected on the walls and refracted in a multihued halo on the ceiling. In the mornings, light comes through a circle of tumbling glass squares—they look like Jell-O cubes or Jolly Ranchers—on the eastern arm of the transept.

In the apse, an 18-foot-tall wooden totem, its shape defined by two symmetrical concave arcs, stands vigil over the shifting light patterns. Few visitors take its picture. When the doors at the south end open, it looks out to the State Capitol and the gleaming skyscrapers beyond.

Fourteen stark, square slabs of black and white marble—this one a black triangle joined to a white trapezoid, that one a vertical black stripe sandwiched between two white ones—line the walls at eye level. But you barely notice them. They reflect the light from the windows, too. Like the Stations of the Cross in a church, the slabs play a supporting role in “Austin,” bringing viewers’ focus back to the light, the building’s central mystery.

Just as the population centers in Texas are in continual, often contentious, conversation, so are their signature artworks. “Austin” invites comparison with Houston’s Rothko Chapel and Dallas’s lesser-known Chapel of Thanksgiving, designed by the architect Philip Johnson. While residents of the three cities debate barbecue, climate and traffic, these buildings argue over spirituality and public life.

The 14 Rothko canvases inside the chapel favor the negative way: a mystical, solitary spirituality of withdrawal.

The Rothko Chapel seems like the near-opposite of “Austin.” If Kelly’s free play of light pushes visitors toward exuberant visual pleasure, then the 14 Mark Rothko canvases inside the chapel favor the negative way: a mystical, solitary spirituality of withdrawal.

When you sit on a cushioned mat and take up a meditative posture in the Rothko Chapel, the paintings occupy your entire field of vision. In time you realize they are not entirely black or purple, as they seem at first. Fields of green and red appear after minutes of concentrated seeing. An engrossing texture emerges. Still, you cannot find yourself within the paintings. They reflect nothing of what you bring to them. 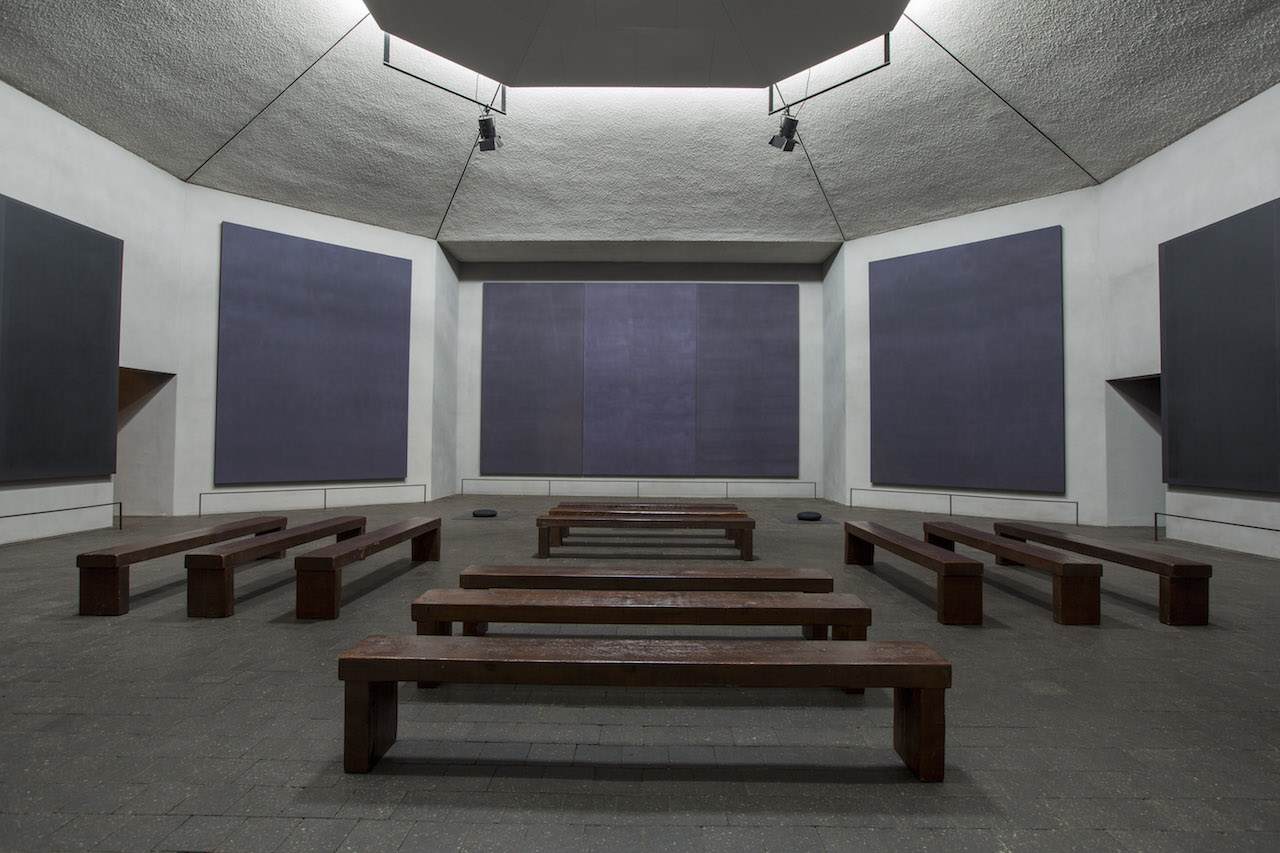 And you can’t take a selfie. Just a few years ago, the Rothko Chapel’s ban on photography would have been unexceptional. Now it seems radical. Without the ability to mediate your experience through your phone’s camera, you just have to cope with the stark negativity of the panels. Compared with the joyous colors of “Austin,” there is something harder—though not necessarily better or truer—about that.

In Dallas, Johnson’s Chapel of Thanksgiving suggests a different model of spiritual engagement altogether, one in which each faith helps animate civic life. Words play a significant role in this spirituality. Sayings on gratitude from Christian, Buddhist, Jewish and Native American traditions are carved and printed around Thanks-Giving Square, the downtown park the architect designed, in which the chapel stands. 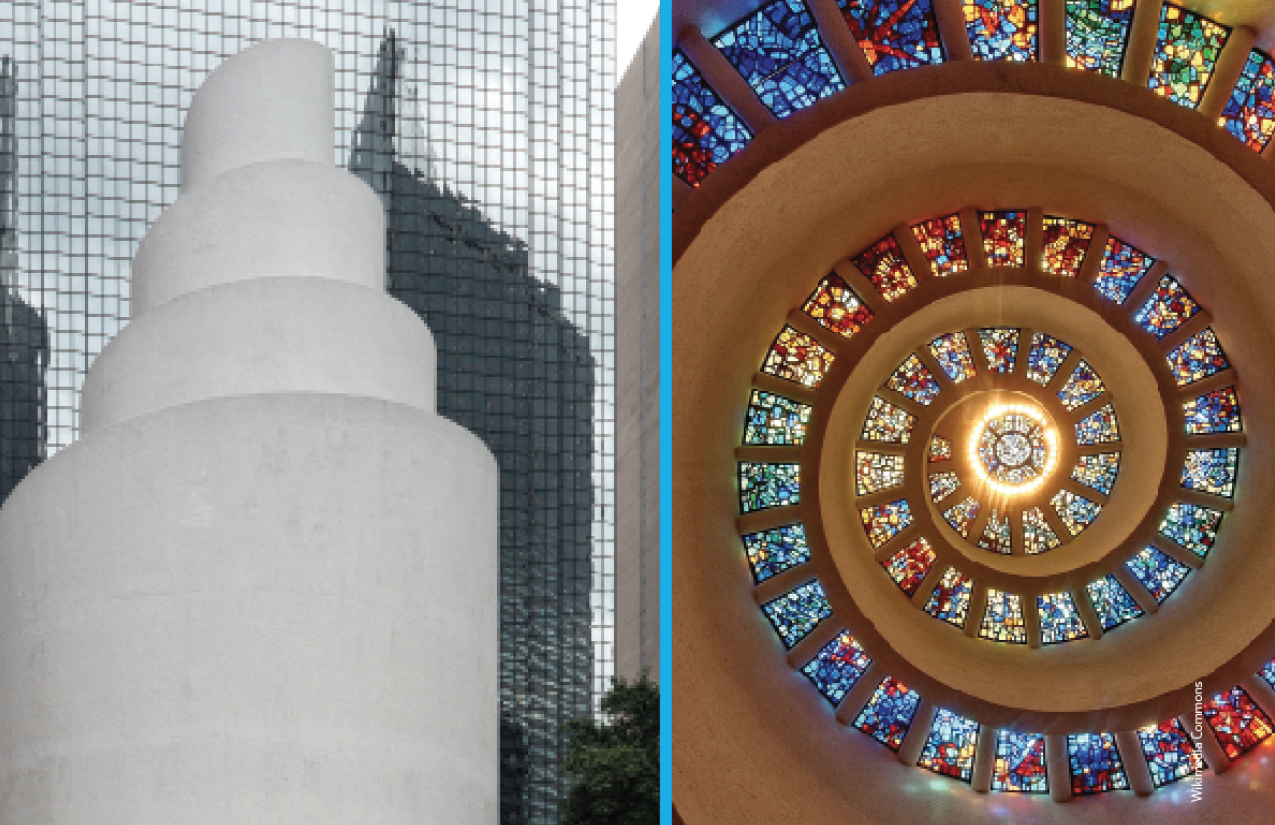 Dreamed up in the months after the Kennedy assassination and completed in 1976, Thanks-Giving Square was the site of a prayer service for the five local police officers murdered while protecting a Black Lives Matter march in 2016. It is also where members of the clergy have led rallies in solidarity with refugees. (A block away, the Trump-loving minister Robert Jeffress’s First Baptist Church offers a less inclusive approach to religion and public life.)

The chapel’s design echoes a spiral minaret, like a roll of paper pulled upward from the middle. There is only room for a dozen chairs and a marble pedestal inside. But the ceiling coils upward 90 feet, adorned by Gabriel Loire’s 73-panel, stained-glass “Glory Window.” In the chapel’s vestibule is a small desk, where a visitor can write a statement of gratitude on a card and then hang it on a pegboard for others to see.

On a recent afternoon, one note, addressed to God, read, “I want to take a minute, not to ask for anything from You, but simply to say Thank You for all I have.” The writer included his email address. Another note expressed thanks for a half-century of marriage. Next to it, another read, “I’m thankful to be alone so that when I’m gone, no one will hurt.”

It is tempting to see the sincerity of these prayers as an indictment of the superficial, Instagram-ready experience “Austin” invites. It sometimes seems as if we care more about documenting ourselves than putting in the hard, humbling work of contemplation or gratitude.

Why a janitor saved the rosaries confiscated at the Mexican border
Michael J. O’Loughlin

But even as artworks converse and argue, none ever gets the final word. There is room for more than one type of experience with art or spirituality. When we post pictures of brilliant color blocks on social media, we are acting out an evangelistic impulse to share what we have seen and the joy we have felt.

Different pilgrimage sites—whether religious or aesthetic, or both at once—lend themselves to different experiences. In fact, they demand their own distinctive ritual actions. At Lourdes, you take the water. When you go to Chimayó, you take the dirt. You go to “Austin” to bathe in the light, to undergo a visible transformation. And you take a picture.

Excellent article. Very interesting to read. I really love to read such a nice article.
https://arynews.tv/en/category/pakistan-elections-2018/