Review: How the godmother of punk became a Dame of the British Empire 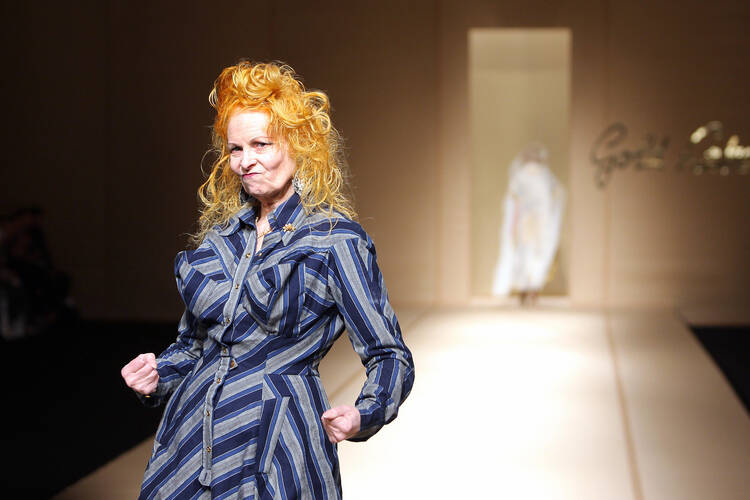 Somehow I missed out on the reign of punk, at least during the mid-1970s, when I was teaching journalism and American studies at Fordham University in the Bronx at a time in which the borough was burning and the Vietnam War was challenging the national conscience.

When I was a kid, a “punk” was an obnoxious guttersnipe, a bad-mannered mini-mobster. Later it was used to refer to a young member of a rebellious countercultural group. By now, however, it has infiltrated, diversified and occasionally dominated visual art, dance, literature, film and, above all, the fashion world; like a missionary apostle, it has planted its seeds in design firms all over the world.

Vivienne Westwood is director of one of the last independent global fashion companies in the world.

Over 40 years punk, as a subculture, has evolved, in the music and fashion worlds, adapting to the dominant culture by warring against it. There seem to be no limits to the way it adapts its sexual imagery, gender identification, economic status or politics. Safety pins and razor blades serve as jewelry, leather jackets are decorated with pins or painted logos. Some wear swastikas for shock effect. Punk rockers have elaborate hairdos, torn clothes, safety pins, studs and spikes. Men and women look like one another, often wearing excessive makeup and shaved heads.

The film "Westwood: Punk, Icon, Activist” opens with an elderly (77), long gray-haired woman in a long black dress seated alone in an armchair getting ready to talk to the camera. She is Vivienne Westwood. In the film, she talks about her life and her struggles and how she won the honors that identify her today: Dame of the British Empire, appointed by Her Majesty Queen Elizabeth, and director of one of the last independent global fashion companies in the world.

The climax of each catwalk is the appearance of Westwood herself, each time disguised to be a different person.

Born in 1941, she arrived in London in the late 1950s. In London, she met Malcolm McLaren, manager of the Sex Pistols, who became her partner and whom she later married. By 1971, McLaren and Westwood were selling clothes they designed. By 1981 she showed her first catwalk, in which models, male and female, parade speechless down the runway, displaying daring clothing meant to capture the spirit of the time. In 1989 she met Andreas Kronthaler, who would later become her husband and design partner. As the film progresses, Andreas, a former student of Westwood’s, is introduced. He is much younger, tall with a black beard and dressed in an all-white costume.

But how does creatively designing a sometimes antisocial line of clothing explain Westwood’s remarkable reputation? We get a hint when, in the midst of a designing exercise, she blurts out, “England is not a democracy.” She thinks in global terms, not just in sales terms—though she opens shops in New York and Paris while the film is being made—and argues for our responsibility for the world itself. We see her staring at the ice floes at the Arctic Circle, campaigning against fracking and addressing huge rallies on climate change.

The film however is not really about her social-political contributions. What remains in the viewer’s imagination is the razzle-dazzle collage of a stream of catwalks and various parades of Westwood’s designs down the runways, garments designed to thrill and surprise judges and customers. One model’s shoes have heels so high and thin that the model collapses on the runway. The outfits become more outlandish, bizarre, surprising as each one passes.

The climax of each parade is the appearance of Westwood herself, each time disguised to be a different person who has defied the wages of time: her gray hair, which we have seen in both long and crew-cut style, in one scene is red and curly, in another, brown and curled up, then black and hanging down, then golden blond. And there is always that radiant smile. It is the designer’s way of explaining an unusual life; and it is hard to call it an independent work of art more than a commercial. She, in life and in the film, is selling herself. We too can be young, timeless and outrageous. Learn to defy time and paste ourselves together for work or fun tomorrow.

Raymond A. Schroth, S.J., is editor emeritus at America. He lives at Fordham University and writes.

In the U.K. she is seen as not credible as an environmentalist. Her clothes are sourced in Turkey and China- notorious for their sweatshops. She talks climate change action and uses the rhetoric of advocacy, yet it is just not what she does. Unfortunate that our reviewer has not dug down more deeply into this individual who is simply not credible.