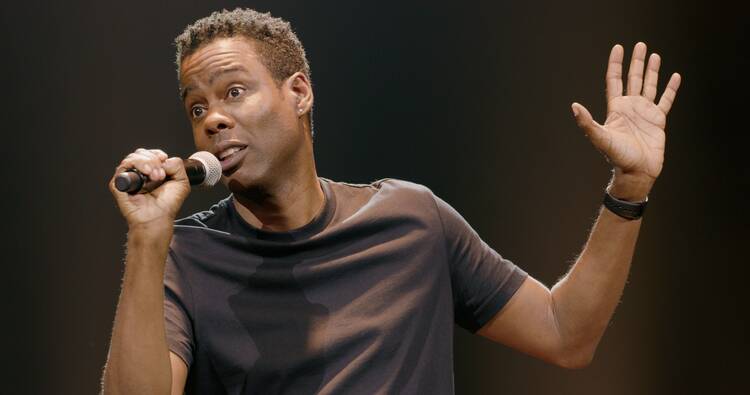 Chris Rock’s first stand-up special in a decade might seem an unlikely source of relationship guidance. But all couples—the long-term and the newly-minted—should watch “Tambourine”on Netflix. I would go so far as to suggest that it should be mandatory viewing in all diocesan Pre-Cana programs. Can someone start an online petition for that?

Rock’s segment on relationships is grounded in personal experience. While it is not the first time he has taken from his own life in his act, it is the first time he has made himself so vulnerable. His recent divorce and his own self-professed failure as a husband provide the springboard for his bits on relationships, which fill the entire second half of the one-hour special.

Rock confesses his sins as a cautionary tale. His ego, his failed marriage, his competitiveness, his infidelity and his addiction to pornography are all explored and utilized, not so much for laughs, but for catharsis and edification, both his and our own.

“Tambourine” should be mandatory viewing in all diocesan Pre-Cana programs.

In proclaiming his failings, he underlines what he views as the keys to a successful relationship: mutuality, service and attentiveness (my words, not his). “Love hard or get the f— out,” as he puts it. Perhaps there are prettier or gentler ways of expressing this bit of wisdom, but that doesn’t take away its truth.

We live in a confessional age (thanks a lot, Sylvia Plath!). What used to be content solely for the dark, wooden confines of the church confessional is now casually served up in tweets, posts and bestselling memoirs. Rock is not breaking new comedic ground, but what makes it so compelling is that he is the one who is doing it. He has built a career on being a critic. His laser-focused observation and searing commentary are delivered, while keeping his audience completely at ease, with his raspy voice and ubiquitous mischievous grin.

Rock speaks of the irreparable damage that his cheating did to his marriage.

In many ways he fits the archetypal man-boy of comedy. While never lacking depth topically, his humor traditionally stayed near the surface emotionally and personally. This does not speak to a deficiency in his previous work. Emotional depth and vulnerability were just not a part of the Rock persona.

It is this new variable, this paradigm shift, that gives the confessional element in his work its power. He speaks of the irreparable damage that his cheating did to his marriage. As he says, he cheated because he wanted “something new.” He then goes on to say that the consequence of this desire for “something new’’ is that “your woman finds out and now she’s ‘new.’ She’s never the same again. So now you’ve got new, but it’s a ‘bad new.’”

He continually refers to himself as “a bad husband,” stating that “I didn’t listen, I wasn’t kind, I thought I could do whatever I want because I made all the money. I didn’t play the tambourine.” Chris Rock is hurting for all of us to see. He is a humbled man, full of regret, in pain. It is all of his own doing, and he freely owns up to it. His cries are not the inauthentic, self-deprecating ones of a Woody Allen. There is no manipulation here, no playing of “poor me” for a laugh or for anything else—just a real man in pain.

Chris Rock is hurting for all of us to see. He is a humbled man, full of regret, in pain.

This transition, this new element of humility and vulnerability, was necessary and perhaps inevitable. Comedy is a young man’s game, and Rock is no longer young in “comedian years.”

For all its merits, “Tambourine” is not as funny as his earlier work, most specifically his seminal HBO special “Bring the Pain.” Gone is the hyperkinetic rapid-fire delivery and the stalking intensity of 20 years before, when there seemed to be an urgency to his message that his body couldn’t contain. Now his gait is more measured, and he seems less to be fuelled by high voltage synapses and more by the middle-ager’s second cup of coffee.

In that vein,“Tambourine”is less about belly laughs and more about nodding affirmations. The first half of the special is in Rock’s more traditional milieu of social commentary, as he interrogates race, bullying and religion. He begins strong. His first line of the entire piece is, “You would think…you would think…you would think the cops would shoot a white kid, just to make it look good.”

Witty? Yes. Clever? No doubt. But laugh-out-loud funny? Not so much. While his points are relevant and suitably provocative (his stance on bullying will raise more than a few eyebrows), there are others who are doing this type of comedy better right now: Dave Chapelle, Jerrod Carmichael and Michael Che, to name a few. Rock’s segment on religion is particularly unfunny, as he retreads the barren terrain of “God doesn’t make mistakes,” which works neither as a comedic bit nor a rhetorical exercise and seems beneath him and his comedic legacy.

With age, Rock has lost some of his comedic teeth—the eagerness and vitality of 20 years ago have been sanded down, undoubtedly by much success, fame and, clearly, pain. The sharp-as-a-tack man-boy of comedy has become a divorced middle-aged man. But while the laughs don’t come quite as frequently or loudly, the message goes a lot deeper.

Jake Martin, S.J., a special contributor to America, is a doctoral student in Film at Trinity College Dublin and a Research Fellow at Trinity Long Room Hub, Arts and Humanities Research Institute.

If nothing else I find your lone comment hilarious J.

I'll watch this on Netflix. Though well past the "pre-Cana" stage by over 20 years, there are likely to be lessons learned. I've always liked Mr. Rock as a comedian; he is not nearly as profane as most of his peers, and his social commentary is often astute.

Sorry. I can't see making Chris Rock's latest special on why his marriage failed and why he regrets what he did mandatory viewing for Pre-Cana couples. Here are a few options I think might be a better way to spend a couple's time: sit down and talk to a couple (an ordinary couple, not a celebrity) who's been married forty years; talk to a couple who went through a life threatening illness together; talk to a couple who lost a job or had to file bankruptcy; talk to a couple who had issues conceiving children....and how they got through it - together. There are many many couples who have overcome tremendous challenges in their marriage, and have made their marriages stronger because of the way they approached those challenges together. How about focusing on what to do - not what NOT to do?

Amazing TV show I have ever watched. Now you can watch this TV show along with other many popular TV shows for free on your Android and iOS devices using Glass movie apk download

Have you tried Redbox TV or Not? for Live TV Channels

Now you can follow Tv series and live Tv channels with the help of Ustvnow app. You can download ustvnow on Android