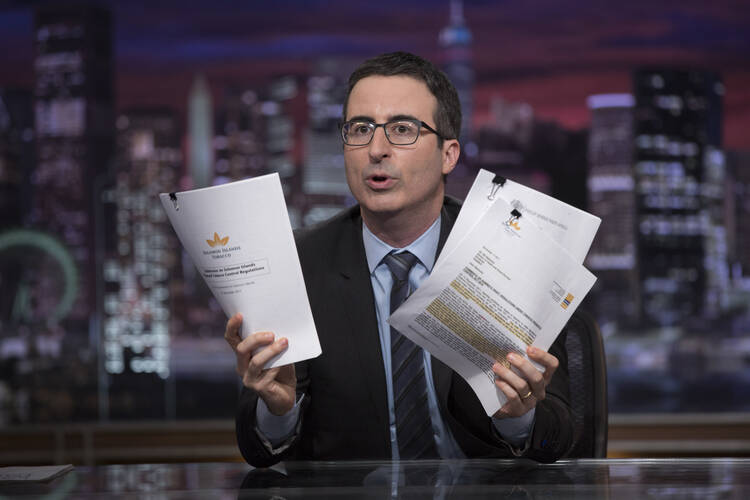 This article is part of our Point/Counter-Point series. For a contrasting perspective check out Please Stop Watching John Oliver.

Back in the days before my priestly vocation was even a twinkle in the eye of God, I was a comedian. Whether or not I was a funny comedian or not is irrelevant—though the fact that today I am a Jesuit priest and not the star of my own nightly talk show might loudly whisper as to the level of my comedic gifts.

One of the first things I learned from one of the many phenomenally talented people that came out of the Chicago comedy world was to always play to the top of my intelligence. That is, to never play dumb, or dumb down my humor for the sake of a laugh. Comedy is a serious business that can and should deal with all sorts of important issues; and consequently, you need to bring all your intellectual resources to the fore if you hope to create something that is authentic. Ultimately, comedy is about the truth, and to hide or underplay your intelligence is both dishonest and insulting to your audience.

There has always been a link between the comic and the political going back at least to the time of the fool’s role in court.

HBO’s “Last Week Tonight with John Oliver”begins its fourth season on Sunday and not a moment too soon, considering the current political climate. Oliver slammed the door shut on his season finale last November with a thorough journalistic and comedic interrogation of the incoming administration, which proved yet again that “Last Week” is the best example of the power that humor can have in bringing about change in the sociopolitical realm.

Our Moment of Zen: Saying Goodbye to Jon Stewart
Bill McGarvey
There has always been a link between the comic and the political going back at least to the time of the fool’s role in court, but the evolution of stand-up comedy in its modern form—brought about by the likes of Lenny Bruce and Richard Pryor, wherein the voice of the comic becomes prophetic in its critique of contemporary culture—as well as the growing influence of television, has allowed the link between humor and the political activism to flourish. The rise of the mock news show at the end of the 20th century further strengthened that link, so that by the time of the 2008 election cycle, programs like “The Daily Show” and “The Colbert Report” were considered to be legitimate outlets for obtaining news and analyzing the contemporary political climate.

“Last Week”takes that connection to another level as it moves away from coverage of multiple subjects covered in a series of brief segments like its cousin “The Daily Show,” to an entire half-hour episode devoted to a single topic. This format allows for a more thorough and in-depth analysis, and it is clear that the research done by Oliver and his writers is exhaustive. It is by any measure investigative journalism of the highest order. So great has the cultural influence of “Last Week” been, that no less an expert on all things current than Timemagazine coined the term “The Oliver Effect” in response to the influence the show has had on issues such as net neutrality and bail requirements, to name two.

“Last Week”has demonstrated humor’s twofold power in bringing about change, while simultaneously bringing about catharsis. Humor, first and foremost, allows for release at a visceral level, it allows us to laugh, to let go. There is something fundamentally liberating about laughter that diffuses tension and allows for fresh perspective. But humor can also challenge us intellectually and, at its best, asks us to question the status quo while intrinsically bringing what is dishonest and inauthentic into the light.

There have been those who suggest that “Last Week”is representative of all that is wrong with the liberal elite. That it reeks of smug, intellectual, self-satisfaction and is fundamentally disconnected with the everyday Joe or Jane, the silent majority, as it were. But this argument is counterintuitive when considering that the position of the comedian or the comic is always from outside or below, which means that the best, most authentic humor always comes from a place of observation or low status. The best comics, from Chaplin to Bruce to Pryor to yes, even Oliver, are always critiquing those in positions of power and attempting to subvert that power through irony, parody and satire. This suggests that the criticism of shows like “Last Week”as being elitist and out of touch with the plight of the poor and working classes is disingenuous and in bad faith. There is no question that the best humor is always that which is intelligent and thought provoking—and, most importantly, true. It is shows like “Last Week Tonight” that bring forth the truth and challenge their viewers to both change and work for change.

This article is part of our Point/Counter-Point series. For a contrasting perspective check out Please Stop Watching John Oliver.

Evidently, the correct form of address is so-called President Trump (as with the SCP's appointments, such as so-called Attorney-General Sessions).  The SCP has already changed the US political system.  In fact, 'system' is too ordinary and organized a word for this; perhaps "Dance of the Dunces" is more relevant.

This article and other articles in this magazine are an admission of the intellectual bankruptcy of the left. It says that mocking, bullying, silencing, appeals to ones emotions and denying the obvious are all the left has. Especially humiliating when it comes from a Jesuit magazine. You would think the so called masters of reason would know better.

I had never heard of John Oliver till two articles about him appeared in this magazine concurrently. There is never a valid intellectual argument offered except to issue ad hominems or complaints. Which is always an admission that there is no argument.

John Oliver may make some people feel warm inside but he and the dysfunctional protests by the left are probably worth a ton of votes for the other side. Of which I thank them. But

My advice to the editors and authors of America; get out more and learn what will make the country and world better. Distortions and lies and mock schadenfreude by the left will definitely not get it done.

Quod ali cibus est aliis fuat acre venenum. One person applauds another boos. One hears John call out politicians for their patently false claims and facts. Another person hears no valid intellectual argument but instead hears mocking, bullying, and silencing. However, both persons claim his opponents are intellectually and morally bankrupt. One man's dysfunctional protests are another man's dysfunctional protests. Both claim that Congress is broken and they want the other side to be cooperative. Citizens cry to Congress, "Can't you put aside ideology and compromise for the good of the country?" But both want their side to prevail. Both want freedom of speech and blame the other of being traitors. Both claim God is on their side.

What a pretentious, pompous article.

John Oliver fires shots at afflatus-filled dirigibles, of which some lesser ones drift through here continuously and without end.