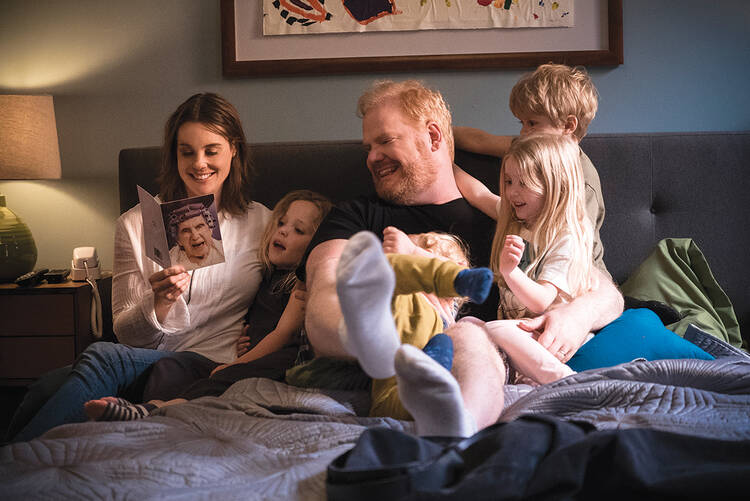 I must admit I approached the “The Jim Gaffigan Show,” now airing on TV Land, with much fear and trembling. I wanted the show to be funny, but I was afraid it would be, well, funny. There is the funny that is of the immediate, visceral kind, the kind that makes us laugh instantly and does not tiptoe around our personal relationships, ethical standards and religious convictions. And then there is funny.

Funny is the sort of humor (and that term is used loosely) that, whatever its source, brings with it an obligation to laugh, either because it’s said by a loved one, or it favors our religious, ethical or political stance. Whatever the reason, there becomes a sort of Kantian imperative to laugh, regardless of whether it is actually funny or not. And we do laugh, but not instinctively, not viscerally, because funny is the kind of funny that requires a bit of effort on our part. With funny, laughter isn’t a destination, as the saying goes, but a journey, as there usually has to be some sort of mental gymnastics involved to get to there.

We get to the laugh through a process of apologetics and justifications. We feel we should laugh, we want to laugh. We want to laugh oh so very much, because the laugh isn’t about us, and it isn’t about the content, it’s about so much more than that, it’s about who we love, what we believe in, who we are. And because of this deep existential investment, we feel we owe it to our ethical stance, our loved one, our religion, our gender or what have you. We owe it for the sake of justice and all things good to laugh, even if, even though, it isn’t very funny. And we do laugh, and then we say “It’s funny,” with equal parts doubt and hope.

I approached “Gaffigan” with the fear that it was going to be funny, because, well, the red flags were there. The show has been in development purgatory for three years, having been picked up and then dropped before ever seeing the light of day by more than one major network. It went through a couple of cast and writer changes along the way before finding a home at TV Land, a network whose original fare has consisted of primarily supplying work to Betty White and a seemingly endless chains of TV has-beens.

But I wanted “Gaffigan”to be funny, because Jim Gaffigan is one of the few stand-ups these days who is both clean and funny, and then there’s the matter of his faith, because, let’s not beat around the bush, the man is Catholic and so am I, and I root for the home team. Gaffigan is unapologetically Catholic (or as unapologetic as a comedian can be) and along with Stephen Colbert has given the faith two of its most media friendly, likable public representatives since Pope Francis. So I wanted to like “Gaffigan,”but the doubts were plenty, and as Scripture said, “has anything good come from TV Land?” (I might be paraphrasing a bit).

But “Gaffigan”is funny, not funny funny, butreally funny. The show is a semi-autobiographical account of the day-to-day life of the titular star as himself, a stand-up comedian living in New York City in a two bedroom apartment with his wife Jeannie (Ashley Williams) and their five children. The five kids is one of the true to life elements of the show, and Gaffigan in both his stand-up and on the show refers to his wife as a “Shiite Catholic.”

The show is shot on location throughout the city, a choice which saves the show from the sterile sitcom feel it might have had otherwise, because while the show is funny, it’s not reinventing the sitcom wheel.

Recent reviews have compared it to both “Seinfeld” and “Louie,” primarily because of its New York location and protagonists’ occupation, but in truth “Gaffigan” bears far more resemblance to a more orthodox sitcom predecessor: Ray Romano’s “Everybody Loves Raymond.” Like “Raymond,” the show focuses primarily on the domestic world of its protagonist with little focus given to his professional life. Though she does not have the comedic gifts of “Raymond’s” Patricia Heaton—who set the gold standard, for the exasperated sitcom housewife type—Williams does a fine job of deftly working within the tension of playing the responsible spouse/parent and allowing for moments of reckless abandon.

The rube husband/put upon wife trope in sitcoms is as least as old as the first time Ralph Kramden said, “To the moon, Alice!” But what has frequently gotten lost in this dynamic is any sort of believable notion as to why or how a sane, reasonable woman would fall in love with such a buffoonish man-child. With Williams’s Jeannie you see the love; it’s very clear why she fell in love with her husband, and his buffoonishness is central to that, not in spite of it. As an audience we’re privy to the warmth and tenderness Jeannie feels for Jim, not through overt dialogue or behavior but rather through the occasional look and gesture, just as you would with a real married couple.

And then there’s that whole Catholic thing. The show, while hardly proselytizing, doesn’t back away from Gaffigan’s faith life. There are always a few incidental references to his faith in each episode, be it his daughter’s application at an all-girls Catholic school or Jim’s being shamed by his parish priest (Tongayi Chirisa) for his truancy from Sunday Mass. Indeed, the parish priest is no elderly, Irish, brogue-spewing stereotype from the 1950s but a young Zimbabwean, an authentic casting choice which speaks to the very real situation of the contemporary American church. That Gaffigan’s wife is frequently stuck taking her entire brood to Mass on Sundays solo is another authentic note, and though “Gaffigan’s” Jim isn’t the most observant of believers, it’s still very clear that he believes.

At the end of the day, though, all that matters is whether or not it’s funny. Not funny. And “Gaffigan” is funny. The show is peppered with other real-life stand-ups including Adam Goldberg as Jim’s bizarre, sex-starved, mother-dominated best friend in a very funny turn and Michael Ian Black as Jeannie’s gay ex-boyfriend, in a, shall we say, less funny turn. “Gaffigan”will not change the face of the television sitcom, but it just might change TV Land. And most important. it will make you laugh, because it’s funny.