Review: A Christian town faces its sins in post-war Hungary in “1945” 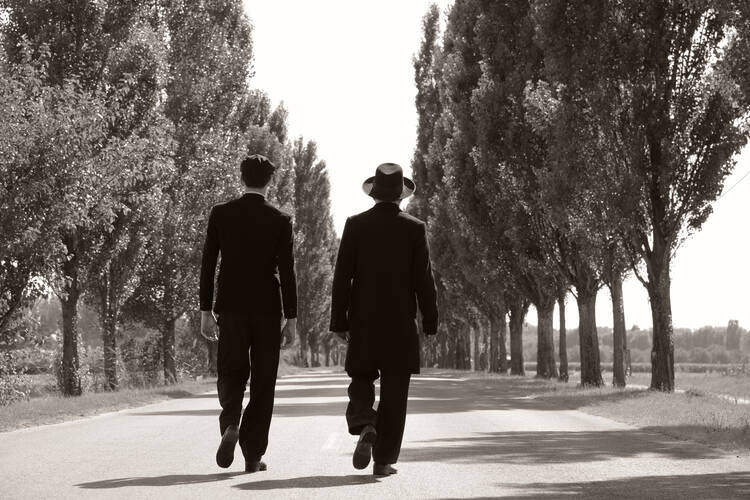 That this film is called “1945” means many things. World War II has just ended, and a little town in Hungary—where the Soviets still tool around in jeeps—has not made the psychological transition from a German-occupied country to a post-war community where democracy is supposed to take root. The cross over the dirt highway entering the town signals that it is Christian territory and the joyous atmosphere of the day in which the the town clerk István’s (Péter Rudolf) son will marry the lovely Rózsi (Dóra Sztarenki) signifies a bright future for a town that has survived Nazi occupation.

The long road into town, bereft of traffic, stretches to the horizon, guarded by trees on both sides. Two men, a bearded father and a slender son, dressed formally in black, accompanied by a horse-drawn wagon carrying two wooden boxes containing, they say, a perfume shipment, walk, almost march, silently side by side. What is really in those boxes? Who are they? What do they want?

Their presence stirs up panic. “Jews are coming.” “How many?” “What do they want?”

Written and directed by Ferenc Török, based on the short story “Homecoming” by Gábor T. Szántó, “1945” is a movie is set in an era where “it appears that there is still a chance of setting forth on a sunny path to the future at the same time as exploring a year the dark memory of which still lives on among us,” the producer says.

That this film is called “1945” means many things.

The title of the short story that inspired the film was, of course, ironic. As the guests’ wagon moved silently through the town, up and down streets, we hear virtually nothing from the mysterious visitors, only “What do they want?” whispered from one townsman to another, especially to the town clerk, who knows only too well what they want.

Much of the town—houses, furniture, businesses—belongs to these two visiting men. The Jews had been driven out, some to the death camps; now, the townspeople feared, the Jews would want their town back. The townspeople are, in a sense, a collection of war criminals, but they are slow to face the truth, while the truth, in its inexorable way, is seizing control.

As the townspeople gather to celebrate the wedding, the would-be groom, who has been aware that his bride-to-be really loves another man, confronts her: He is leaving town; he knows of the other relationship. Together they must skip the wedding and flee together. She refuses; he goes.

The town drunk knows that the Jews are the real owners of the property, and that he was complicit the year before in identifying the Jews as the Nazis rounded them up. Now his conscience tells him that all must be restored to the original owners. Soaked in brandy he seeks out the parish priest to make his confession. The priest, a pompous fat man, is too busy decorating the church for the wedding to hear the confession properly, but he half-listens, lets the drunk stammer his sins, and kicks him out. The town clerk’s wife, who spends much time in bed, castigates her husband for his irresponsible behavior, for “murdering” the Jews by revealing individuals to the Nazis.

‘Faces Places’ may be the quintessential French road movie
Raymond A. Schroth, S.J.

In ‘The Midwife,’ a Christian message of forgiveness—without Christ
Raymond A. Schroth, S.J.

Meanwhile the Jews with their horse-driven cart and its mysterious cargo continue their sacred journey through town and out to the cemetery, where two employed workmen dig burial holes for them. When one young man tires, the son takes off his coat and digs. By now a crowd of villagers, led by the clerk and armed with work weapons, has followed them and surrounds them at the grave site. The Jews open the boxes and reverently take out sacred mementos of the former Jewish population (books, plaques, religious garments, pictures, old baby shoes), wrap them in religious robes and place them in the graves.

The central question of the film becomes whether the Jews will be able to claim what is rightfully theirs and whether the cross that appeared in the background earlier in the film will have any meaning for the town which is considered Christian.