Harry Potter is now on Broadway and it might never leave 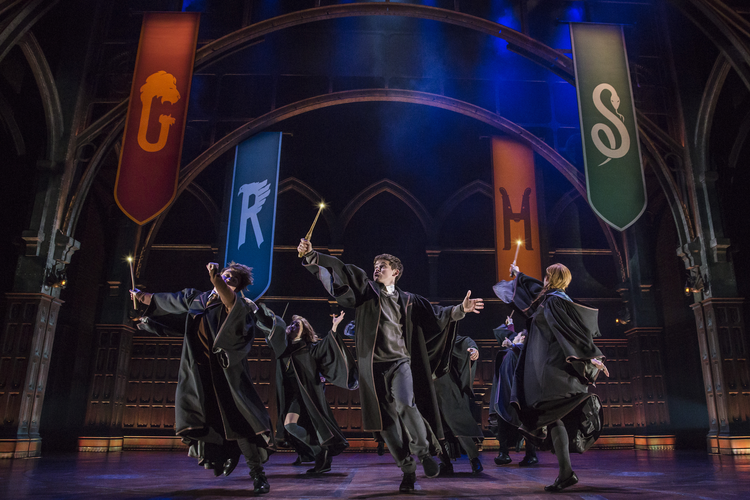 Has Broadway, New York City’s renowned theater district, once home to some of the world’s great drama, been transformed in recent years into little more than a theme park for tourists? It’s a frequent charge, and those who make it have a gleaming new exhibit to enter into evidence: “Harry Potter and the Cursed Child,” a two-part extravaganza that has landed at the Lyric Theatre for what might as well be a permanent residency, with ticket prices comparable to the cost of an all-inclusive family vacation. The theater’s interior has been tricked out with gargoyle fixtures, Gothic wallpaper and carpeting bearing an “H,” and the shops for gifts and concessions already look more like fixtures than pop-ups.

But with its sprawling narrative and jaw-dropping special effects, this live “Harry Potter” sees the theme-park charge and raises it: What theme park, let alone stage play, delivers this much entertainment value? Most don’t even think to try. The crowds pouring in for this sensational spectacle don’t have to strap on virtual-reality goggles or 3-D glasses, and the ride isn’t over in minutes; it runs close to six hours, including intermissions. It is an honest-to-goodness piece of marathon theater, in other words; and for all its state-of-the-art technology, it achieves its effects, special and otherwise, by theatrical means as old as Shakespeare’s: bodies in real space and time, costume and makeup, light and shadow, some expertly employed trap doors.

The hand-wringing may be overwrought, then, but it cannot be dismissed so easily. After all, what does it say about the state of American drama that this flashy, populist confection—a British import, no less—is likely to win this year’s Tony Award for Best Play and become Broadway’s longest-running non-musical (the record is held by the comedy “Life With Father,” which ran for 8 years starting in 1939)? Put another way: Is a great spectacle the same thing as a great play?

This Broadway season offers a convenient study in contrast. “Angels in America” is also a two-part marathon, crawling with incident and dotted with stage magic, but its stature as one of the last century’s great pieces of stage literature lies more in its perceptive depths than its dazzling surfaces. A more apt analogue for “Harry Potter” might be “War Horse,” a dramatically flimsy but theatrically gripping British import from 2011 (incidentally, also directed by the director of “Angels,” Marianne Elliott). But whereas that show shamelessly pulled heartstrings by putting children and animals in mortal jeopardy, “Harry Potter” offers a richer menu of thrills, laughs, twists and turns. And there is inarguably something about the material’s antiquated trappings—wands, owls, capes, staircases, spell books—that makes it an ideal fit for the old-fangled storytelling traditions of the stage.

“Harry Potter and the Cursed Child” is both a sequel to Rowling’s iconic seven-book series and a canny rehash of many of its tropes.

With a script by Jack Thorne (based on a story he concocted with Potter’s creator, J. K. Rowling, and the show’s director, John Tiffany), “Harry Potter and the Cursed Child” is both a sequel to Rowling’s iconic seven-book series about the precocious boy wizard and a canny rehash of many of its tropes. Like the new “Star Wars” films, it rewards but does not require intimate foreknowledge of the canon, as it spends considerable time revisiting key moments of its own legend—in this case, literally. The vehicle of teen rebellion chosen by Harry Potter’s pouty son, Albus, is to travel back in time to right a wrong from his dad’s past. This allows the show to rifle back and forth through the chronology of Harry’s Hogwarts adventures, as well as to create a dense multiverse plot tangle that takes the show’s long running time to unravel. There are new faces along the way—Albus’s bestie is Scorpius, the engagingly awkward son of Harry’s old rival, Draco Malfoy, and a Goth girl named Delphi who tags along for crucial parts of the journey—as well as a gallery of familiars: Harry’s old pals Ron and Hermione, and Dumbledore, McGonagall, Snape, Voldemort.

Those among us for whom that list of names is talismanic make up the show’s obvious target audience. But as that is a not insignificant portion of the population, and because the Potter mythos is so culturally ubiquitous as to need almost no introduction (there’s a synopsis of all seven books in the program for those who need to catch up), the show’s generous “fan service” hardly feels like a geeks-only niche effort. Any who aren’t Potterheads going in are likely to be converted, thanks to John Tiffany’s tight direction, Stephen Hoggett’s brisk choreography and a series of stage tricks that consistently surprise and delight, often by combining simple stage elements into alchemic illusions.

Trump isn’t Voldemort, and other lessons from Harry Potter on its 20th anniversary
Vanessa Zoltan

To its credit, Thorne’s script, like Rowling’s books, strives beyond fantasy and fable to plumb its characters’ humanity, with mixed results. Best is the show’s portrait of the joys and trials of friendship, in large part due to Anthony Boyle’s show-stealing performance as Scorpius. Less successful are efforts to mine the childhood trauma of orphan Harry (played gamely by Jamie Parker) in a few too many scenes rife with unearned earnestness.

An ambitious reading of the show might see in its time-travel premise a reflection on the moral conundrum of teleology—the way that tragedies can seem to pave the way to triumphs—but the show could hardly be mistaken for a treatise on “felix culpa” theodicy. In its last quarter the script strains the edges of credulity, even for its fantastical genre, and the final showdown has some of the ritual exhaustion of most action films.

Ultimately this “Harry Potter” may be a bit too much of a good thing, but at these prices, that is hard to begrudge. If every show were this fully realized, Broadway—plays, musicals, theme park rides and all—would be better for it.

This is a great news for all of us which is about harry potter now Broadway and it might never leave. I am really enjoying while reading this post and I hope you will share more details here with us.
Get tarpaulin sheet online in UK