‘Howards End’ is another period drama worth falling for 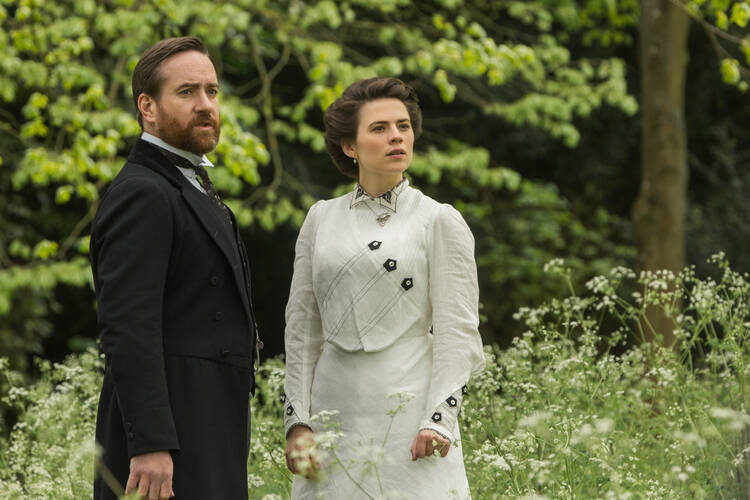 There is an irony in the American love for English period dramas, both on television and film, and it’s not just in our craving for a culture we purportedly shook off centuries ago. What is striking is that so many of them are based on English novels that were, in their day, blistering critiques of the social order. We may tune in to ogle the costumes and admire the posh accents, but if we are paying attention we may notice that the conflicts over property, manners and marriage are hardly trifling peccadilloes. They are instead dramatized arguments over how to live and who the world rightly belongs to.

‘Howards End’ is a state-of-the-nation thesis in the guise of a real estate inheritance plot.

That, at least, is the thrust of Howards End, E. M. Forster’s great 1910 novel, which was the basis for a perfect film adaptation in 1992 and for a smart, involving new series from the BBC, airing on the Starz cable network. The series is delivered in Sunday night installments that are bound to remind older, pre-binge-TV generations of their weekly dose of “Masterpiece Theatre” on PBS. (The show is now halfway through its four-part run.) Like Evelyn Waugh’s later classic, Brideshead Revisited, Forster’s is a state-of-the-nation thesis in the guise of a real estate inheritance plot, and the romantic affairs it traces signify deeper allegiances and betrayals. Superficially these affairs involve the Schlegel sisters, Margaret and Helen, two trust-fund bohemians from London, one of whom is wooed by Henry Wilcox, the widowed patriarch of a rich, industrious family, while the other takes up a crusading interest in the strivings of a poor young clerk, Leonard Bast. But the real seducer in the first case is not so much Mr. Wilcox as his late wife, whose homey, beloved country house, Howards End, becomes the focal point of a struggle for nothing less than the soul of England.

Where the Merchant Ivory film stressed the soul and the soil, the new adaptation, with a script by the American playwright and filmmaker Kenneth Lonergan (“Manchester by the Sea,” “Lobby Hero”) and direction by Hettie MacDonald, forefronts the novel’s transactional machinery, to clarifying if somewhat demystifying effect. From the start, Margaret (Hayley Atwell) stands as a sensible mother figure to flighty sister Helen (Philippa Coulthard) and troglodyte brother Tibby (Alex Lawther), hovering indulgently over their artistic passions rather than partaking herself. She also plays the role of peacemaker with the Wilcoxes after an ill-advised fling of Helen’s with a young Wilcox heir and soon forms a bond with the family’s lonely matriarch (Julia Ormond). The latter’s untimely death due to illness sets in motion the next crucial twist in the inheritance plot, which may be hinted at by her name, Ruth, a byword of female solidarity.

Under the heel of the English imperial boot, however finely polished, teemed a large, exploited underclass.

There is a male obstacle en route to Margaret’s destiny, though, in the form of Henry Wilcox (Matthew Macfadyen), whose prosaic masculinity and crisp, businesslike cast of mind she finds both captivating and morally suspect. It is here that Forster’s complicated, even contradictory humanism rears it head: As much as he deplored the English will to conquer, organize and monetize not just the far corners of their empire but also their own pristine countryside, he also saw his own implication in that project. “More and more do I refuse to draw my income and sneer at those who guarantee it,” is how Margaret puts it at one point. But her accommodation to the ways of the world is in pursuit of a larger good: She hopes to improve the obstinate Henry with love rather than persuasion. Instead it takes a few helpings of tragedy, shame and forgiveness.

Under the heel of the English imperial boot, however finely polished, teemed a large, exploited underclass. This grim reality is represented here by the awkward figure of Leonard Bast (Joseph Quinn), an intense young man hanging on by his fingernails to a job and a wife, Jacky, who in the book and the earlier film was portrayed as a kind of music-hall floozy and who in the new series is played by a black actor, Rosalind Eleazar. This nod to the larger reaches of empire is a fascinating addition, though it does little to flesh out the Basts into anything more than social symbols. While the actor who played Leonard Bast in the 1992 film, Samuel West, was able to shade the character with inchoate yearning, Quinn mostly seethes and stares.

Such inevitable comparisons to the film are not finally damning to this new adaptation. While not surpassing its predecessor, it handily holds its own. The more leisurely four hours allows Lonergan’s script to include more of Forster’s dialogue and subtle social observations (as well as a few of Lonergan’s own), and it should hardly be a surprise that many scenes here come off as expertly constructed stage drama. The youthfulness of the series’s Mr. Wilcox—the character is meant to be considerably older than Margaret, but Macfadyen has less than a decade on Atwell—gives their wooing a plausible spark that occasionally leaps off the screen. But this version also does its best to keep them at a cool distance, negotiating more than flirting; there is scarcely a happy embrace on offer here. Instead, what we gain from this largely unromantic romance—mostly thanks to Atwell’s finely calibrated, cogitative performance as Margaret—is a gimlet-eyed alertness to the provisional nature of human relations. This is deeply true to Forster, whose motto “only connect” referred not just to the moral supremacy of personal relationships but to the need to join the prose of life to its poetry, the seen to the unseen.

At one point Atwell’s Margaret stands among her books and furniture, transplanted as if by rough magic into a home she is not yet sure she can claim as her own, and you can feel her asking: Who am I and what am I doing here? There are few larger questions worth pondering—and if it takes an attractive, well-spoken woman in a corset to make us face them, that seems a fair bargain.

I wonder how many America readers subscribe to Starz? Intriguing as a program like this may be, I tune out when I see "Starz"....

I thought the same thing. How many readers are subscribers to Starz?

We don't subscribe to Starz or HBO or most of the extra-money cable stations. It sounds like a good series, but it's one we won't be watching.