Can a parent’s perspective aid our understanding of Scripture? 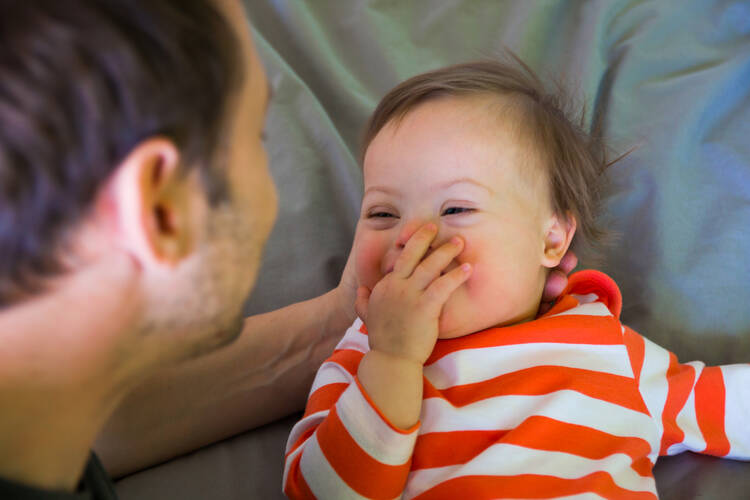 There it was again.

I was serving as a blind referee for papers submitted to a contest for a scholarly theological prize. One essay analyzed the use of the term ektroma in Saint Paul’s first epistle to the Corinthians: “Last of all, as to one untimely born [ektroma], he [Christ] also appeared to me” (1 Cor 15.8).

At first, the paper offered a classic exegesis of the text. It studied the vocabulary. The word ektroma literally means “the aborted one” or “the miscarried one.” It is usually translated into English by the more genteel “one untimely born.” A few aggressive translations render it as “runt.” The author then explained different theories of the meaning of this obscure text. Was Paul alluding to the fact that he was a disciple of Christ for a shorter time than the other apostles? Did it indicate his lowly, sinful status when he was called to preach the gospel?

I recoil when I read autobiographical explanations of someone else’s work. But not in these cases.

But then the paper suddenly veered into first person. The author revealed that he was the father of a child who had recently died in a miscarriage. Subsequently, he had joined a support group for Christians who had lost a child through abortion, miscarriage or childbirth. Pouring out his grief, he spoke of the inestimable worth of the child he and his wife had long sought but had now lost. Rather than being an insignificant piece of matter, the ektroma now emerged as a being of incomparable worth. He proceeded to interpret Paul as being precious in God’s eyes because he was a tragically lost child. The commission to preach the gospel did not emerge on a neutral timeline; it was a consummate gift to a young human being who had been left for dead.

I was reviewing a new history book for an interdisciplinary journal. The monograph dealt with the decision of a 17-century widow to abandon her teenage son in order to enter the convent. The author explained that such abandonments, which often enraged the children, were not uncommon in this era. Why did a practice that would seem so objectionable today receive commendation in the church of that period? How could maternal abandonment have become a virtue?

As the author pondered the theological justifications for this practice, she also moved into the first person. She revealed that she is a mother of a child with Down syndrome and recounted the many challenges she faces in finding proper medical care, education and spiritual support for her beloved daughter. Her poignant narrative of her own relationship to her child made the earlier practice of maternal abandonment for the sake of the cloister even more disturbing.

The claim that maternal and paternal thinking are different from generic human thinking touches an indisputable truth.

When I read such autobiographical explanations of someone else’s work, I instinctively recoil. I am old enough to have been raised in the (now old) New School’s methods of literary analysis. We are to interpret a text or a life in terms of the inner structure of that work or life. We are not to project our own history or emotions or causes into the subject at hand. We are to respect the distinctive universe integral to each artwork. Never perfectly achieved, third-person objectivity remains the ideal. There is a steely beauty to such an approach, emphasizing the otherness of form and of facts. The danger of eisegesis when we interpret someone else’s book or geography in terms of our own idiosyncratic experience is real. Truth can yield to sincerity. Rational argument can surrender to emotional narrative.

As the two authors I evaluated indicated, certain people have an existential privilege in discerning the truth in analogous situations. The father of the child lost through miscarriage helped me to grasp the centrality and worth of the ektroma in Paul’s analogy, something I had missed with earlier lexicographical interpretations of the passage. I have long wrestled with the church’s centuries-long tradition that religious life was objectively superior to the state of marriage—a position that justified both paternal and maternal abandonment—but the detailed testimony of a woman facing the challenges of a special-needs child brought the problem with this position into a lacerating focus.

What is the link between mental suffering and artistic creativity?
John J. Conley, S.J.

With all of its dangers, the growing postmodern claim that maternal thinking and paternal thinking are different from generic human thinking touches an indisputable truth. And the two authors I encountered deepened this truth by unveiling the suffering and regret that can swirl around the child one lost and the anxiety and joy that can enfold the child one raises.

This is a type of narrative thinking where the heart still has its reasons.

I question the applicability of "New School" literary analysis to Scripture. The Living Word is more than a text. Scripture study is good, but means little if we don't pray with Scripture, and enter into it with our whole being.

"The church's centuries-long tradition that religious life is objectively superior to the state of marriage" is irritating and mostly wrong, if maturity is the earthly goal of religion. Sexuality, with parenthood being its usual result, can mature people far more quickly and certainly than spirituality. Under the best of circumstances, being a parent is 24/7, lifelong formation in self-giving, and it cannot be revoked. Under difficult circumstances, being a parent can be a lesson in maintaining sanity in impossible situations.

A parent's understanding can aid our understanding of Scripture, so can a woman's understanding of Scripture. We seldom hear a woman's understanding of Scripture. The story of Martha and Mary is a story about a fight between two sisters. We never hear an interpretation of the most obvious part of the story, primarily because only men interpret Scripture. The story of Jesus defending the woman caught in adultery is about ending the death penalty for women in the matter of adultery. No wonder women loved Jesus extravagantly - he allowed them to live in the same situations in which men were allowed to live. A woman was the only human to anoint Jesus. What does that mean for the role of women in the church? Anointing was so important in the ministry of Jesus that it is part of his title - Jesus the Christ. Surely the fact that only a woman anointed him has meaning for choosing leaders in the church - perhaps church leaders should be required to have the endorsement of women before becoming bishops, cardinals, and popes. The church would be radically different if the consent of women were required to designate church leaders.

Some things cannot be understood from an "objective" viewpoint. Scripture is one of those things.

At last... I read a lot of "spiritual" books which are learned, insightful, helpful and full of truth. Essentially without exception the authors are priests or religious. Consequently there is sometimes a disconnect. Once you are married and/or become a parent, you are fundamentally changed and can no longer approach God as a single independent person. (I've tried; it doesn't work.) No doubt the same must be true of other vocations (e.g teacher, health care.) Anyway I think there's a crying need for solid spiritual/exegetical/theological advice/direction by people whose vocations are not holy orders. (Those are great too but necessarily incomplete.)