The faith journey at the heart of ‘A Wrinkle in Time’ 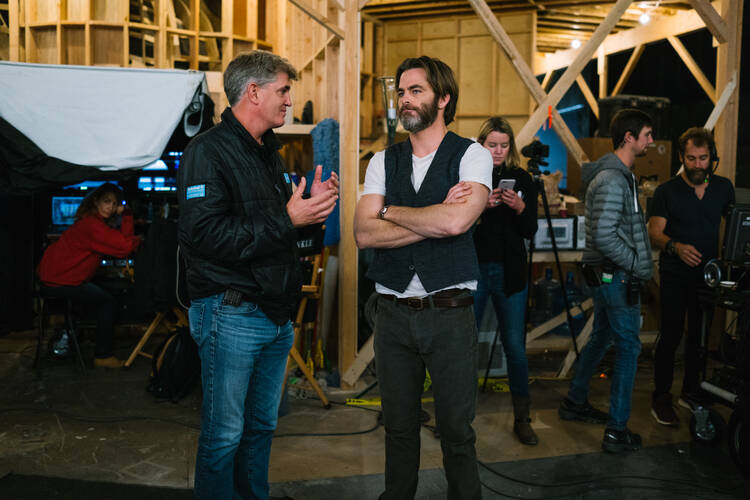 Jim Whitaker is a lay Catholic and Hollywood filmmaker who served as producer of Disney’s forthcoming movie “A Wrinkle in Time,” adapted from the book by Madeleine L’Engle. Mr. Whitaker’s other producing credits include “Robin Hood” starring Russell Crowe, “Friday Night Lights,” “The Finest Hours,” “The Odd Life of Timothy Green,” “8 Mile” and “Pete’s Dragon.” He directed the 9/11 documentary “Rebirth” and worked for 16 years at Imagine Entertainment before moving from Universal to Disney. An alumnus of Georgetown University, Mr. Whitaker has also contributed to projects at the Berkley Center for Religion, Peace & World Affairs there.

On March 2, I interviewed Mr. Whitaker by phone. The following transcript of our conversation has been edited for style and length.

As a Catholic, what attracted you to adapt this novel for the screen?

Two things: One is that it’s about hope, and the other is that it’s about a girl who’s in a very difficult situation and goes on this incredible journey through the universe to discover that the power of the universe is actually within her. And yet she had to go on this celestial journey to find all that out. Both those ideas were very powerful and important to me growing up as a Catholic and just as a human being.

Author Madeleine L’Engle was a Protestant, but what universal themes in this film might resonate with people of all religious backgrounds?

There’s a great character named Mrs. Who, who quotes many mystics and people of religious persuasions throughout the film, and they’re multicultural. There’s a moment when they wake up on the first planet and Mrs. Who lifts Meg up and says, “The foot feels the foot when it feels the ground.” It’s a quote from Buddha, but I love it because I often think how important it is to keep your feet settled on the ground and connected.

Love conquers all and goodness overcomes evil. The themes in the book are very large and sweeping, and I hope that people come away from it feeling a personal sense of being able to connect with others and just say those three words: “I love you.”

What were some highlights and challenges for you in producing this film?

The highlight of the film was Ava DuVernay, a force-of-nature director who became a friend in the process. The challenge: it’s been remarked that [this book] is an unmakeable adaptation. And so we had to really find a way to streamline it into its core essence about this girl, her emotional journey and the fun adventure she has. But it’s really a great kids’ story that had to be boiled down and reduced to something that’s filmable—and that was challenging on a daily basis.

How does your Jesuit education at Georgetown University influence your approach to filmmaking?

My Jesuit education heavily influences my filmmaking. It starts with the projects I choose. I want everything I work on to have some level of impact and meaning and purpose—and that’s a direct line from me leaving Georgetown, to coming here to Hollywood, to a couple of years when I was trying to figure it out before I could to really choose the things I wanted to make.

I want everything I work on to have some level of impact and meaning and purpose.

“8 Mile” might not seem like an obvious [example], but truthfully it’s an incredible film about someone trying to find his voice in the midst of great darkness, and that was really important to me at the time. By comparison, “A Wrinkle in Time” is a movie about someone who feels very different, but who then discovers that she’s completely of the world and of the universe.

How has your Catholic faith changed or evolved over the years?

I would say in the last year it has become more prominent in that the time I spend in church is greater. But most importantly, I’ve become much more attuned to listening. The Jesuits have this great term that’s always lived with me, that in life you find out where you’re meant to be and your purpose through “discernment.” And I’ve really found myself in a much higher and more attuned place of listening to the world outside of me and to what’s inside of me.

I think [my faith’s] become more attuned to the world I’m living in, and it’s a pretty dark world right now. There’s a lot of suffering, and I personally believe what I do has in some measure an ability to ease that suffering.

Who inspires and sustains you in your faith?

Right now it’s St. Francis of Assisi. He’s sort of come back into my life recently, as a saint and a person whose goal was to ease people’s suffering and who was attuned to listening. I’ve been reading an autobiography of his life and found it to be quite compelling.

You mentioned discernment earlier, but how do you pray?

I’ve come to believe that prayer is a daily, moment-by-moment thing. If I’m in the “connected” part of my way of walking through life, then almost everything I do is in a certain sense a mode of prayer. Other than that, I try to get some in the morning.

I think the movie has many faith elements in it. It’s truly a journey of a girl who, without seeing and having real evidence of her father, makes a bargain to travel throughout the universe to find him. And I think that’s a really powerful metaphor and statement that’s worth considering about the nature of faith. How you have faith, without being able to have “real” evidence, is kind of the key, and challenge, of life.