The Oh Hellos: the folk rock band that’s not afraid to address politics or religion 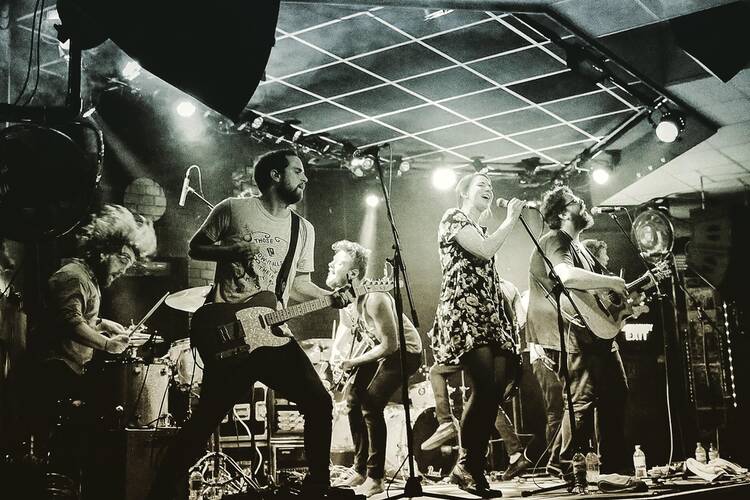 Photo by Laurie Heath via The Oh Hellos

The Oh Hellos are a Texan brother-sister duo made up of Tyler and Maggie Heath. Formed in 2011, their high-energy indie-folk has exploded from a humble Bandcamp presence (an online music company where artists can sell their music on a name-your-price basis) to headlining shows at venues like Red Rocks Amphitheatre in Morrison, Colo., and the Newport Folk Festival in Rhode Island.

Shirking the trend among folk bands of keeping their religious references vague, The Oh Hellos’ Christianity is one of their foundational inspirations, the capital letters referring to God dotting their otherwise lowercase lyrics. Their first full-length album “Through the Deep, Dark Valley,” is a story of reconciliation with God, and Maggie Heath once described their second album, “Dear Wormwood,” to me as “basically C.S. Lewis fanfiction,” based heavily on The Screwtape Letters.

Between the 2015 release of “Dear Wormwood” and now, the United States has experienced some of the most intense political polarization in its recent history. Southern Christians like the Heath siblings suddenly came to be associated, often unfairly, with the toxic nationalism that motivates the alt-right. In response, for the first time in their six-year history, The Oh Hellos got political.

Maggie Heath once described their second album, “Dear Wormwood,” to me as “basically C.S. Lewis fanfiction,” based heavily on The Screwtape Letters.

The lead single, “Torches,” off their new EP, “Notos,” came out in November 2017 and immediately evoked images of white nationalists marching with Tiki torches in Charlottesville, Va., three months earlier. Tyler Heath did not mince words when he told NPR, “‘Torches’ is a song about violent nationalism and tribalism, and how easy it is to hate what you don’t know.”

While the political sentiments were new, the way the band wove them throughout the EP was not surprising to their fans, who had seen the duo produce two tightly thematic concept albums already. The idea of facing the unknown and having to accept it informs all of “Notos,” and the band said in the liner notes that the EP is about asking where one’s ideas come from.

“Notos” is also named after the Greek god of the south wind, who was said to stir up summer storms like Hurricane Harvey, which ravaged the band’s native Texas last fall. The Heaths parallel the fear of the unknown with the incoming storm, capturing the protagonist’s stubborn resistance to it (“Torches”) before he or she is finally overwhelmed (“Notos”) and comes to accept it (“New River”). “Mandatory Evac / Counting Cars,” an instrumental track, transports the listener to a gridlocked highway during one of the government-ordered evacuations that have become all too familiar for those living along I-10. The rising tension in the song resolves to a delicate acoustic picking that expresses not the freedom of reaching an open road to inland safety but the short-lived acceptance of having to ride out the storm. Finally, the intensity of “New River” kicks in, evoking the sounds of buffeting rain and wind.

The entire album is couched in the story of the prophet Elijah.

Even on an EP named after a Greek deity, The Oh Hellos cannot help but braid Scripture into their music. The entire album is couched in the story of the prophet Elijah, beginning with the first line of the first song, “On the Mountain Tall”: “On the mountain tall, whisper to me words in a voice so small, like the one that to Elijah called, quiet as a candle and bright as the morning sun.”

These themes combine in a beautifully complex way: the children of “Father Ignorance” and “Mother Fortuna” referenced in “Torches” are reminiscent of the followers of Baal in the Elijah story, who are stunned to realize that Elijah’s God is the true God. Elijah runs away because a rain storm is coming, just as we want to push away any new idea that conflicts with the worldview we have built. The rising fear of what is unfamiliar can feel like the rising water of a storm surge or like the wind, earthquake and fire that Elijah waits out. And in the end, all is resolved with the still, small voice we hear at the end of “New River.”

The “Notos” EP packs in many of the high-energy folk elements fans have come to love from The Oh Hellos—shouted group vocals, hand clapping, electric guitars, uptempo banjo picking and fiddling all tied together by drummer Austin Norman’s relentlessly fun and varied beats—along with the lush, peaceful intervals characterized by the Heaths’ airy vocals and layers of soft strings. Maggie Heath Chance’s lead vocals have grown stronger since “Dear Wormwood,” and she shows off her vocal control and range in the title track.

The album is impressively mixed and mastered by the Heaths, giving the album, particularly “Constellations,” the clean sound that characterizes so much mainstream folk. “Constellations” has already been featured on the prominent curated “Fresh Folk” playlist on Spotify, which will likely bring the band some new devotees. And while the mastering does cut down on the unbridled sound that characterized their previous albums, the “Notos” tour that begins this month will surely include all the head banging and antics (jumping up on the table with a snare drum and hanging from the rafters come to mind) of the 14-person live band that make The Oh Hellos’ shows so memorable.

“Notos” is the first part in a series based on the Anemoi, the Greek gods of the winds who each have unique personalities. The series will continue exploring the theme of where ideas originate. Eurus, the warm wind of autumn, is up next, with an EP by that name coming out February 9. The lead single, “Grow,” was released on Jan. 18.

What a great band. Be sure to check out the Christmas album. music.theohhellos.com/album/the-oh-hellos-family-christmas-album
That was my first exposure to them, which came via a tiny desk concert at npr.

The Oh Hellos are a fantastic band. Nice review.