Review: ‘Vazante’ offers a look into the history of slavery in Latin America 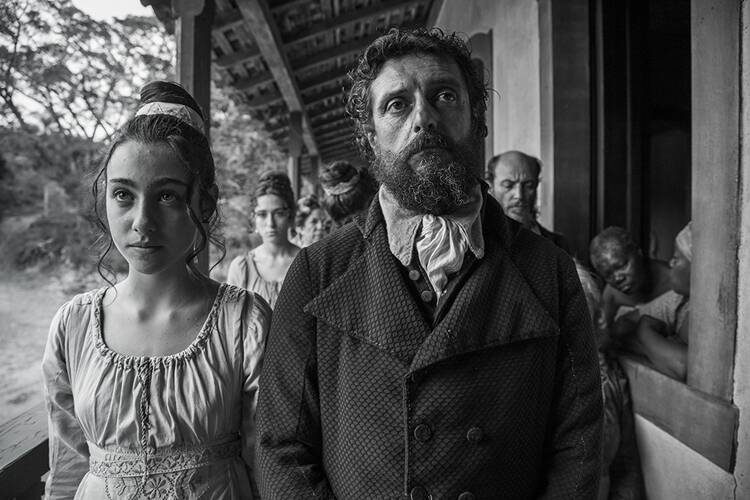 Daniela Thomas’s “Vazante” is a powerful new film that looks into the history of African slavery in Brazil. It opens with a string of men on horseback, carriages and loaded carts. Scenes show black men linked to one another with ropes and chains around their necks as their bare feet slop through the mud in the rain. It is 1821 and we are in Brazil, its craggy, remote Diamantina mountains with their sharp peaks looming beneath the clouds in the background.

Thomas, in her feature-film debut, was inspired by a pageant she had helped prepare when the Olympic Games played in Rio, which celebrated Brazil’s history and cultural identity. A powerful sequence in the spectacle featured actors dressed as African slaves pushing plows and shuffling on shackled feet as they gradually mixed in with indigenous Brazilians. These, she realized, would be the stories “Vazante” would tell.

The film is the story of Antonio (Adriano Carvalho), a cattle-owning horseman. He is the master of a compound of barracks for the slaves and he lives in quarters with a few other employees and his own family, including his wife’s brother, his wife’s brother’s spouse and their young daughter Beatriz (Luana Nastas), plus Antonio’s own mother, who is becoming senile. The compound is built around a diamond mine, which is running low. Antonio is trying, with the help of professional advice he has received, to expand a business based on cattle and farming. The audience watches a tragic juxtaposition as Antonio shops for garments for his expected child, unaware that his wife has died in childbirth.

On one level, "Vazante" is a story of a young man tossed by fate into a pit of loneliness.

On one level, "Vazante" is a story of a young man tossed by fate into a pit of loneliness. His wife’s brother and his spouse leave for the city because she cannot stand the isolation. After his wife’s death, he orders his in-laws to allow him to marry Beatriz, though she has not yet reached the age at which she can conceive. The film serves as a statement about the treatment of women throughout Brazil’s history, their status barely superior to that of a slave. Women did not have the freedom to make their own choices, often even in marriage.

With the principal white characters reduced to a few, “Vazante” is also a film about the history of blacks in Brazil. Africans sold into slavery in South America brought a culture and language that clashed with the culture already present in countries like Brazil.

The film’s plot moves slowly and the dialogue is sparse. The film does not include English subtitles when the African actors speak, thus illustrating Antonio’s alienation from his own workforce, a choice that adds to the tension of the film. Thomas illustrates the conflicts each character faces by focusing silently on many faces, from those of Antonio and Beatriz, who are now sleeping together as husband and wife, to those of various slaves. Meanwhile Beatriz has reached out to a young man her age among the slaves for comfort.

Suddenly, “Vazante” goes from a film that has moved slowly to one moving quickly, ending violently and with the sound of a painful scream. It is a moving look into the history of the complex relationship between race, culture and sex.