‘Faces Places’ may be the quintessential French road movie 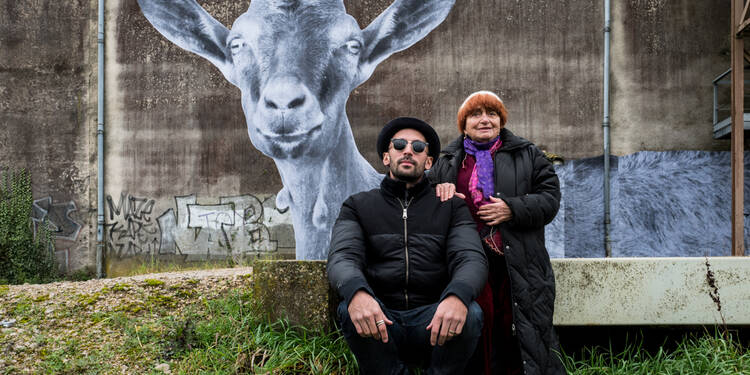 What is this film about? Well, it’s about pictures. What pictures? Well, it would help to put the film in context. The night before I saw it, I had watched Martin Sheen’s “The Way,” the story of a doctor whose son dies in the trek across Spain known as the Camino de Santiago pilgrimage. The father (Sheen) decides to take the trip himself and distributes his son’s ashes along the way. The film’s lesson is that opening oneself to one’s fellow walkers can sharpen one’s spiritual life by openness and sharing.

Just as “The Way” depicts Sheen and his comrades trudging relentlessly up and down mountains and through spectacular countryside, “Faces Places” presents two modern artists rolling through southern France in an odd truck, a high-tech rolling photo-art laboratory. Aboard are 89-year-old Agnès Varda, a leader in the French New Wave, and the 33-year-old photographer and muralist JR. Like “The Way,” it is a road movie. The two people, in one way, are as divided as two travelers could be. Each has his/her own oddity. Agnès has colored her hair, the lower half red and the top white. JR has never revealed his real name, nor does he ever remove his hat or his dark glasses.

“The film is a journey through France but also through memory, both personal and collective. Of workers, farmers and villagers.”

Their self-appointed mission is to bring a new level of aesthetic joy to the citizens and farmers along the way who have somehow lost their grip on the joy of life that photography can produce. According to Olivier Père, a French journalist who interviewed the artists, “The film is a journey through France but also through memory, both personal and collective. Of workers, farmers and villagers.”

What kind of photos do they feature? For the most part, portraits, each 10 feet tall, of workmen in farmers’ togs plastered onto the walls as if Michelangelo had come by and painted God creating Adam on the walls of an abandoned factory.

In one little town, a whole line of red brick homes had been abandoned, and only one widow lives there alone with her memories. Agnès and JR put the truck’s photo lab to work reproducing historic giant-sized photos of a recent generation of workmen, then he and volunteers paste these men on the faces of every house down the road. JR then photographs the widow standing in her doorway in their midst, in tears.

Down on the beach, a huge, stone war bunker built by the Nazis had tumbled from the cliff in 1995, landing on its corner, and now stands on the beach as if it is a propped-up modern sculpture. They paste the life-sized photo of a young man on the surface as if this were a cradle where he always slept. Then that night the waves come in and wash the young man away. The meaning of the blockhouse had briefly been transformed into a house of peace, then, by nature, back to war.

Of course, any film, book or song about a “long, long trail” is a symbol of life’s struggle for every human being.

One town’s main industry is goat farming, but the business is split between those who cut the horns off, because inevitably the goats would fight and one goat would be lost, and those who respected the animals as if they were persons and let them keep their horns. We also meet a beautiful, chestnut horse whose job it is to protect the goats and keep them in order. Finally, a horned goat photo is posted on the side of a barn is if it is a god.

The greatest creation takes advantage of a strike on the waterfront. The men not working run huge derricks that pile empty containers the size of trucks into a towering collection of metal squares as huge as a factory. Then they remove three containers from the middle of the towering square pile and place the blonde wives of three strikers to sit in the hollow spaces dangling their feet over the edge. The artists had been struck by the invisibility of the local women, so they find three wives, one a truck driver, and display them as if the monster pseudo apartment building belonged to them.

Can dance provide the meaning of life? The film "Polina" asks the question.
Raymond A. Schroth, S.J.

In ‘The Midwife,’ a Christian message of forgiveness—without Christ
Raymond A. Schroth, S.J.

Of course, any film, book or song about a “long, long trail” is a symbol of life’s struggle for every human being. It is all the more important that one not make that trek alone. Martin Sheen’s pain, which isolates him from his fellow travelers, is gradually overcome, for example, when his backpack is stolen by a boy but returned when the boy’s father brings the boy and the pack to the travelers. JR, though always jolly, shuts himself off by hiding his real name and hiding his face with dark glasses and a hat. The beloved little Agnès, ironically, has bad eyesight and cannot see the beauty they create together, and she has never really seen JR’s face. At the end he takes off the glasses just for her, and the audience, ourselves, sees his face as she sees it—a fuzzy collection of colors.

I am reminded of my favorite song from the Scottish minstrel Harry Lauder. (Ask your grandparents.)

Every road through life is a long, long road
filled with joys and sorrows too
As you journey on how your heart will yearn
For the things most dear to you...
But onward we must go...

Raymond A. Schroth, S.J., is an editor emeritus at America.