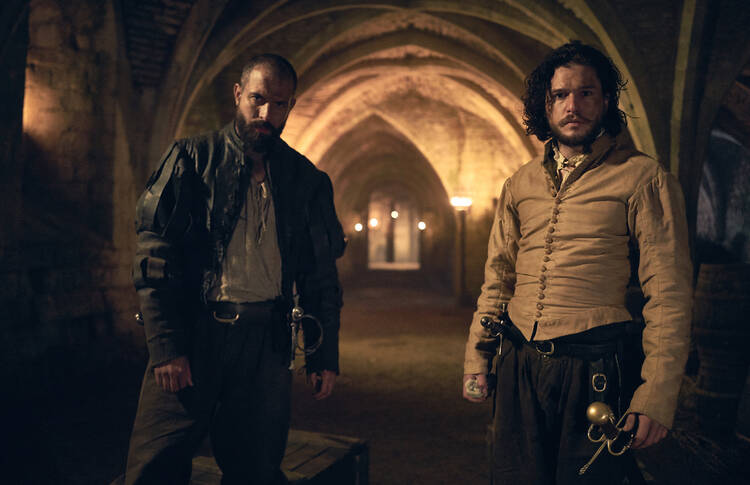 Culture shock would be overstating it. I am still searching for the appropriate anthropological term for my response to finding out, upon moving to London two years ago, that there are still places (O.K., maybe just one place) in Britain that burn the pope in effigy. Not all the time, mind you, just on Nov 5. Still, as a red-, white- and blue-blooded American Jesuit priest, discovering that Guy Fawkes Day was still a thing—complete with fireworks, public bonfires and the aforementioned pontifical incineration by proxy—it was all a bit of culture...surprise.

Really it should not have been all that startling to witness this spectacle, given the British love of all things historical and traditional. It is no real surprise that they would still be celebrating—with relish—a foiled assassination attempt on the king, some 400 years after the fact.

The series tells the story of the Gunpowder Plot, when a group of Catholics plotted to blow up Parliament.

This, in part, explains“Gunpowder,”HBO’s three-part series, which initially aired over the course of the three Saturdays leading up to Nov. 5 on the BBC. The series tells the story of the Gunpowder Plot, when a group of Catholics, led by nobleman Robert Catesby, plotted to blow up Parliament on (remember, remember) the fifth of November, 1605. The planned explosion would kill King James, all his ministers and the members of Parliament. In the ensuing chaos, the plotters believed, the persecuted Catholic minority of England would take over rule of Britain and restore the Catholic faith to the country. It has been described as the greatest act of treason in the history of England.

“Gunpowder” loosely tells the tale of this eponymous plot, under the supervision of Catesby (Kit Harrington), with special appearances by Liv Tyler and the British Jesuits for good measure. If this sounds like it has more of a 1970s celebrity variety show vibe than a historical drama about religious persecution narrative to it, well, you are not very far off.

Because, before anything else—historical accuracy included—”Gunpowder” is a Kit Harrington vehicle, a conclusion that can easily be deduced from the opening credits, where Mr. Harrington’s moniker appears no less than three times. What this means for the audience is that their interest in the goings on of “Gunpowder”will be directly commensurate with their interest in seeing Mr. Harrington. In particular, seeing him traipsing around in period costuming and flicking his hair.

It could be argued—and no doubt it surely was at myriad meetings with the powers that be at HBO and the BBC—that there is a substantial audience for this very thing. This judging by the phenomenon that is Mr. Harrington’s most notable credit, “Game of Thrones.” I am sure there is some truth to both HBO and the BBC’s underestimating the intelligence of the American (and British) viewing public by foisting this show upon them. But what fundamentally distinguishes “Gunpowder”from “Game of Thrones” is not the show’s historicity; because the depiction of Stuart-era English Catholics in “Gunpowder” is about as historically accurate as anything you will find on “Thrones.” It is, rather, the fact that “Thrones”is good television: well written, well paced and well acted.

“Gunpowder”trods the familiar televised terrain of quasi-medieval intrigue and violence, especially violence. Every sort of device from the Tower of London’s torture room is on display. A woman is pressed to death, a Jesuit seminarian hung and then decapitated, with the head subsequently dipped in boiling oil for good measure. Both scenes take place within the first half-hour of the first episode. Though Mr. Harrington claims in real life to be related to the actual Catesby through his maternal lineage, it is difficult not to think that this project had more to do with the popularity of Jon Snow than Guy Fawkes.

And then there are the Jesuits. Jesus once said, “Where two or more are gathered in my name, I am with them.” It is perhaps equally true that where two or more are gathered with a camera and a script with a passing reference to Catholicism, a Jesuit is bound to make an appearance. “Gunpowder”presents us with two historical S.J.s: Henry Garnet (Peter Mullan) and John Gerard (Robert Emms), who conveniently (if not historically) present differing stances to this “lay movement gone haywire.” The elder Garnet, as is always the case in these sorts of things, counsels restraint and prudence. The younger, hot-headed Gerard jumps in with both feet into the boiling plot, never mind that the historical Gerard did no such thing.

“Gunpowder”would have done well to go deeper into Garnet’s dilemma. He knew about the impending scheme within the parameters of the sacrament of confession, however historically inaccurate it might have been. An interrogation of the inherent problem of the seal of confession and preventing the loss of innocent lives would have given the series much needed moral complexity or complexity, period. This might have allowed for a more significant audience investment.

‘The Crown’ is back and the British monarchy has never looked more attractive.
Haley Stewart

Much like Stanley Kubrick’s “Barry Lyndon”—to which the show gives homage with its authentic use of candle-lit interior shots—the visual sumptuousness of “Gunpowder” cannot compensate for its dirge-like narrative and shallow performances. Mr. Harrington never elicits any real response from the audience because he never appears to be doing much more than posturing in a star turn. Robert Gatiss’s Lord Cecil might as well be twirling his mustache as the villain in residence. And the only question Liv Tyler’s performance elicits is that surely a more competent British actress could have done the part for much less expense.

“Gunpowder” is really not much more than a series of awkwardly acted scenes thrown in the midst of innumerable gratuitously violent scenes. The subject matter of “Gunpowder” offers up a multiplicity of interesting narratives and themes to be explored: religious intolerance, the strength of the laity and the limitations of the clergy. A historically accurate narrative of the events would have sufficed. Instead we are left with an off-brand “Game of Thrones.”

I like the article. It articulates what I gleaned just from the TV commercials. One disagreement though: In my Jesuit education (HS and College) I learned that "a Jesuit seminarian hung and then decapitated" should be written and spoken as "a Jesuit seminarian hanged and then decapitated." If the nuance of "hung" was purposeful, then I apologize for my lack of historical knowledge of that specific procedure. *<[;-)

Actually I heard that this version of the Gunpowder Plot actually tried to show how Catholics were treated in England at this time. Something most English people are unaware of.

Most importantly with regard to the Gunpowder Plot, we may notice the change in the writing style and tone of the Shakespearean canon after Garnet was executed and some of the Jesuits in England rounded up and jailed for a year. In the porter's speech of Macbeth, the allusions to Garnet (alias Farmer seeking plentiful harvest of Catholic souls), Robert Southwell (lampooned by monarchy for equivocation at his trial), and Edmund Campion (thumb as relic collected by a tailor at the Jesuit's execution) do not reflect the man Shakespeare's belief that the Jesuits will burn in hell. The passages are spoken by a drunken porter, with drunkenness a Jesuit emblem signifying lack of the spiritual life. Further, we may see the allusions as a communique, informing that Garnet has gone the same way as Southwell and Campion; i.e., Garnet has been executed. The witches' songs of killing swine, 81 weeks (allusion to Campion's execution in 1581), sailing, ports, and winds (a then-Jesuit metaphor for political authority at the ports on the lookout for outlawed Catholic priests) are all an allusion to the Jesuit Oswald Tesimond's escape in a boat filled with dead pigs in the wake of the Plot. It is also a subtle communique on how to escape England, all written under a phony anti-Jesuit stance.