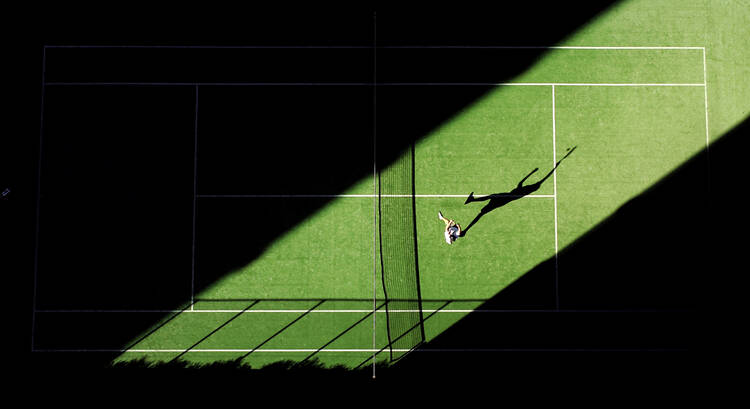 When I was growing up in the Midwest, tennis ranked somewhere between archery and curling in terms of popularity. But everyone knew Wimbledon. As a child who played tennis—not baseball, not football, not basketball, not even soccer, for the love of all things sacred—the only question I was ever asked by well-meaning adults was: “Are you going to play at Wimbledon?” To which I would always respond, “Yes, hopefully…. Someday,” and think to myself: “This is the biggest lie I’ve told all day.” I would never be good enough to play at Wimbledon—I could barely get past the first round of the Little Sprout Classic held every summer at the Mid-Town Tennis Club in Chicago.

Two years ago, when I was missioned to study in London and to live in a Jesuit community in the Wimbledon district of London, I couldn’t help but see the providence—or irony—of the assignment.

So, this year I submit my name for the national lottery for tickets, but never hear anything back. I sign up at the website for notifications on when tickets will be available for purchase, no response. I attempt to buy tickets online, but the cheapest tickets cost well over £1,500. And so, my only option is the Queue.

The Queue is part of the mythology that makes the Wimbledon experience an experience at all; it goes hand in hand with the strawberries and cream and the all-white attire. Upon entering the vast, empty field across from the tournament grounds, in the early hours of morning on the first Tuesday of play, I even receive a pamphlet on the matter: “A Guide to Queuing.”

Getting yourself a grounds-pass—that is access to the non-prestigious “outside” courts—requires you to arrive at the Queue in the early hours of the morning and wait. And wait. I gave up hope of getting one of the 500 tickets available for Centre Court, as acquiring those requires setting up camp at least 24 hours ahead of time. The first thing I make out in the dawn are rows and rows of tents—an image that gives the impression not so much of a campsite, but of a Depression-era shantytown right before it is burned to the ground.

Much has been said about the camaraderie that develops between the denizens of the Queue, as the hopeful wait hours on end for the privilege of entering the hallowed gates of SW19, as it is informally called. And indeed, surrounding me, it seems as though many a perfect stranger is finding lifelong friends. But I am not made from such amiable stock; the very same personality traits that drew me to tennis in the first place—I am not a team player—make the fellowship of the Queue an exercise in standoffish politeness for me. (My mother told me a long time ago not to talk to strangers, and I took her at her word.)

While there is something charming about the Queue in theory (and you can read all about it in the brochure), there is a dehumanizing component to it.

While there is something charming about the Queue in theory (and you can read all about it in the brochure), there is a dehumanizing component to it. My unease is affirmed by a Polish man nearby who says that the whole thing makes him appreciate his parent’s experience of standing in line for a loaf of bread for six hours during the Communist era.

My back and leg muscles were spasming from hours of waiting—the direct consequence of too many hours spent hitting too many tennis balls on unforgiving concrete in my youth—when I finally set foot on the grounds at 10.30 a.m. Because I am always ready to embrace a cliché, the first thing I do is buy strawberries and cream. I am apparently in the minority, however, in abstaining from Pimm’s (a fruity gin-based drink mixed with lemonade)—by 3 p.m. everyone around me in the stands of Court 12 seems to be pretty well wasted.

But there is one part of the Wimbledon Experience that is missing; there is, as Blind Melon once said, “no rain.” In fact, there is an aggressive sun that would rival the sun of Kolkata in July.

Still, I find myself straining to see a match between two shrieking Ovas from somewhere in Eastern Europe on Court 18. Hearing their yelps and the thwack of the ball, my lower back spasms increase and the skin on my face smarts like the faux leather interior of a car in Los Angeles in mid-August.

I don’t want to go, and neither do any of the rest of the fools like myself, who stood in line for 6 hours this morning, only to pay too much money for bottles of water and mediocre food, and be told in no uncertain terms that there were certain places on the grounds we were not allowed to go because we either didn’t have the money, the family or the connections.

These 42 acres of Wimbledon—the first and last bastion of the sport I've loved since my boyhood—contain all that I have ever loved and loathed about tennis. The place is both inherently unjust and powerfully addictive. I can no more stay away than I could stop hitting ball after ball against the back wall of my parent's house 30 years ago. It is the most glorious kind of appalling you will ever find. It is love.