In ‘The Midwife,’ a Christian message of forgiveness—without Christ 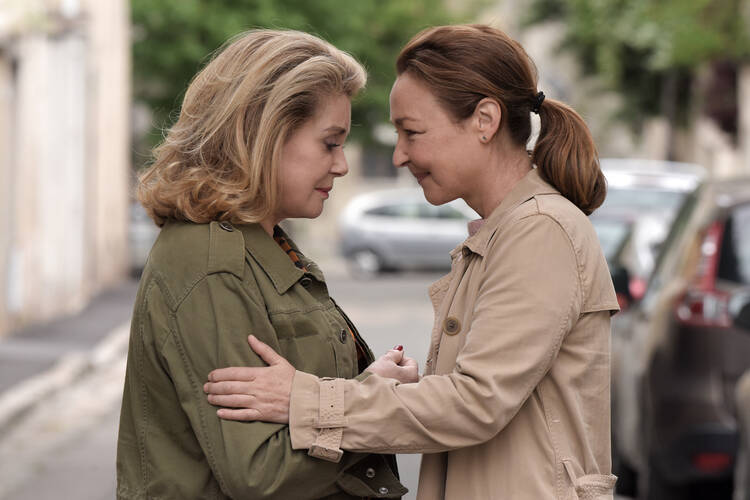 Catherine Deneuve as Béatrice Sobolevski and Catherine Frot as Claire Breton in The Midwife. © Michaâl Crotto/Courtesy of Music Box Films

At least in the new French film “The Midwife,” not all babies are beautiful at the moment of their arrival. Determined to help us really understand the life of his central character, the midwife Claire (Catherine Frot), director-writer Martin Provost filmed a series of actual births so that we could see and be touched by these unique new human beings, covered with white stuff and blood, whom Claire hands us in the first moments of their public lives.

The film is really about two women who have much in common but are poles apart and how they are transformed by a new stage of their relationship. Claire is a professional woman of integrity, hard working and committed to the women who come through the doors of the small maternity ward in a Paris neighborhood at any hour. She “lives for others” and subjects herself to a strict lifestyle of no cigarettes, alcohol, red meat or fattening foods. Her only social interaction is with the international truck driver named Paul (Olivier Gourmet), who shares the urban vegetable garden where Claire raises her natural vegetables. Never married, she has a son named Simon (Quentin Dolmaire). A swimmer like his grandfather, Simon is dropping out of medical school to become a male nurse, and his girlfriend is pregnant.

The film is really about two women who have much in common but are poles apart.

This steady life is interrupted by the arrival of Béatrice (Catherine Deneuve), an older woman Claire has not seen in 30 years. She was the mistress of Claire’s father, who killed himself in despair when Béatrice left him. Béatrice lives for the moment, is flighty and self-centered. She smokes, drinks, gambles recklessly, flirts and, though old, in many ways is still a child. Claire, at first, resists her company; she has not forgiven Béatrice for causing her father’s death. Béatrice courts Claire by sending her a huge bouquet of flowers. Claire puts the gift on her bike and throws it in the river.

Why has Béatrice dared to re-enter the life of a woman who had been, figuratively, her own child? Because Béatrice is dying of brain cancer and cannot bear to die alone. And Claire, because of who she is, cannot abandon a dying woman any more than she could drop a newborn infant.

I am intrigued by new French films in which challenging moral dilemmas are faced with basic Christian ideals, stories that dramatically apply religious principles without the mention of God or a brush with the neighborhood church. While Claire makes no claim to the Christian faith, which would push her to forgive Béatrice for destroying her father, she is still incapable of demanding revenge. She brings Béatrice to live with her. Claire has no relationship with her own mother. Inevitably, Béatrice and Claire interact with one another as mother and daughter—which they have become if Béatrice had married rather than abandoned Claire’s father.

I am intrigued by new French films that dramatically apply religious principles without the mention of God.

They share the same bed, have a drink or two and together watch a family slideshow, which includes a photo of the father in his team swim suit. Just then Simon breaks in and accidentally poses right next to his grandfather, looking exactly like him. Béatrice, moved by the resemblance, gets up and kisses Simon on the lips.

What Love Can Overcome: Life and loss in ‘Call the Midwife’
Paul Johnston

What has become a story about how Béatrice faces death is also about how Claire takes on new challenges in the contemporary economic world. Provost wants to take a dig at the depersonalization of the medical industry. Claire’s small maternity ward is being replaced by a mega-hospital, a “baby factory.” We watch as the cold-blooded personnel director of the modern establishment gives Claire a tour. Claire proudly mentions she has been a midwife for 20 years. The boss brushes that off. “That means nothing,” she says, “You are not now a midwife but a ‘birth technician.’” What counts is technology. Claire runs out the door.

Meanwhile Béatrice, who has undergone brain surgery for the cancer, frantically gambles and unsuccessfully tries to sell her jewelry to pay medical bills and keep living. The camera takes us to the river behind the vegetable garden where earlier Béatrice had seen an empty rowboat tied up. Today the oars are gone and the boat is filled with water, sinking. The camera eye turns up to the huge traffic bridge hovering over the river, the garden, the sinking boat and us.

Correction, July 7: The release date for this film was initially listed incorrectly.

Do you think that the mention of God, or a local Church, would have changed the story, hastened the forgiveness, or brought about a healing or resolution of some sort? I think that God is hidden in the little nooks and crannies of our lives. Bringing into the scene the overlay of a "God"-explanation would diminish the mystery and truth of how things really are.