Why are Catholic horror films so popular? Revisiting ‘Rosemary’s Baby’ for clues 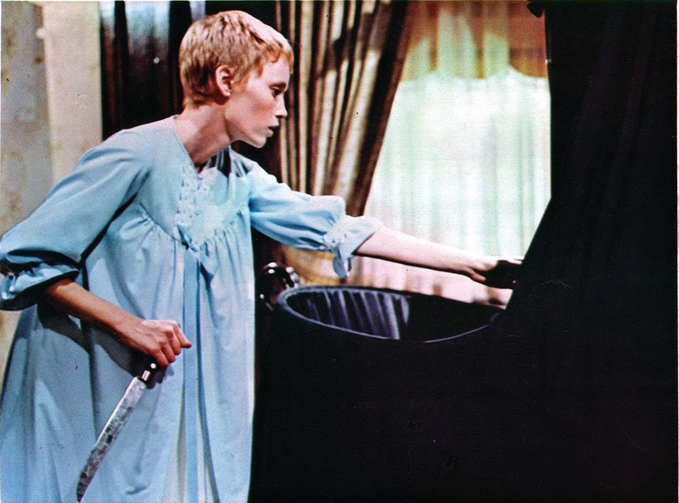 Early in “Rosemary’s Baby”—the classic horror film that will soon turn 50—Rosemary and Guy Woodhouse are eating dinner with their eccentric new neighbors. Minnie Castevet is nosy and forward. Her husband, Roman, a traveling businessman, talks religion at the table. It is September 1965, and Pope Paul VI will soon visit New York City—but Roman quips that “no pope ever visits a city where the newspapers are on strike.” Guy, a struggling actor played by John Cassavetes, says the pope’s tactic is “showbiz,” and Roman continues: “that’s exactly what it is. All the costumes, the rituals—all religions.”

Rosemary, played by Mia Farrow, is quietly looking down at her plate. Minnie notices, and says they have offended her. Roman asks: “You’re not religious, my dear, are you?” Rosemary responds, “I was brought up a Catholic. Now I don’t know.” When Minnie presses, saying, “You looked uncomfortable,” Rosemary replies, “He is the pope.” Roman says, “You don’t have to respect him because he pretends he’s holy” and continues on about the “hypocrisy behind organized religion” in front of a clearly unsettled Rosemary.

It is not surprising to hear a lapsed Catholic’s tepid defense of her former faith in a Manhattan apartment in 1965. But this is no errant small talk. “Rosemary’s Baby”—the film that ushered in a new era in cinematic horror—is an intensely Catholic film. American horror is a God-drenched genre, and many of the essential films in the genre are explicitly Catholic. The culture, theology and symbolism of Catholicism is dramatized, made a source of nostalgia, exaggerated and parodied. Catholics might not go to Mass as much as they used to, but they are still scared of the devil. In Catholicism, evil is real.

American horror is a God-drenched genre, and many of the essential films in the genre are explicitly Catholic.

Lapsed Catholics make for great stories. They have just enough of the old religion to remain superstitious, but are pulled away from practice by doubt. Rosemary and Guy start the film with more earthly concerns. They have a new apartment, and talk vaguely of starting a family—although Guy’s acting career has stalled. Roman says Guy just needs “those initial breaks.” A break comes when the lead in a play mysteriously goes blind, and Guy gets the part. A television role soon follows. Rosemary, in comic unknowing fashion, tells a friend that Guy is “suddenly very hot.”

Guy apologizes for being too focused on his career, and they decide to have a baby. Their candle-lit dinner is interrupted by Minnie Castevet, who offers them homemade chocolate mousse for dessert. Guy gets rid of her, and although Rosemary hates the “chalky undertaste,” he is strangely adamant that Rosemary finish the gift. Drunk on cocktails and wine, drugged from the dessert, or all of the above, Rosemary sits dazed at the kitchen table while Guy hovers in front of a television set. It is Oct. 4. The New York Times and other city newspapers are still closed, but the pope is at Yankee Stadium.

It is against this papal backdrop—and Guy’s curious narration of “Christ, what a mob”—that one of the most infamous scenes in the history of horror films unfolds. Rosemary collapses, and Guy carries her into bed, where she begins to have hallucinations. Despite her paltry defense of the church early in the film, Rosemary is God-haunted in her visions. She has already dreamt about an aggressive nun and now imagines being on a yacht with those most royal American Catholics, the Kennedys. One of her friends—a man who warned her about the apartment building’s Satanic past—is not allowed on the boat. “Catholics only,” she is told.

As Guy begins undressing her in their bedroom, Rosemary’s visions shift to being naked in the Sistine Chapel, and then lying on a bed in a dark room. In a grotesque ritual, she is brushed with blood and surrounded by a chanting crowd. Men tie down her legs, and Guy appears to climb on top of her—until he is replaced by a beastly incarnation of the devil. Rosemary believes that her dream is actually nightmarish reality, but then she sees Pope Paul VI walk toward her. He says, “They tell me you have been bitten by a mouse,” a play on Minnie’s pronunciation of the dessert. Rosemary says, “That’s why I couldn’t come to see you” at the stadium, and asks to be forgiven. The last thing she remembers is kissing the ring on the pope’s outstretched hand.

It is telling that the scene ends with a perversion of the sacrament of reconciliation—a pivotal scene that hinges on its audience’s nuanced understanding of Catholic guilt. The broadcast of the pope’s visit to the United States brings together the main themes of the film: guilt, fame and ritual. The scene’s placement within the film, and even its structural progression, best makes sense through a Catholic ethos. 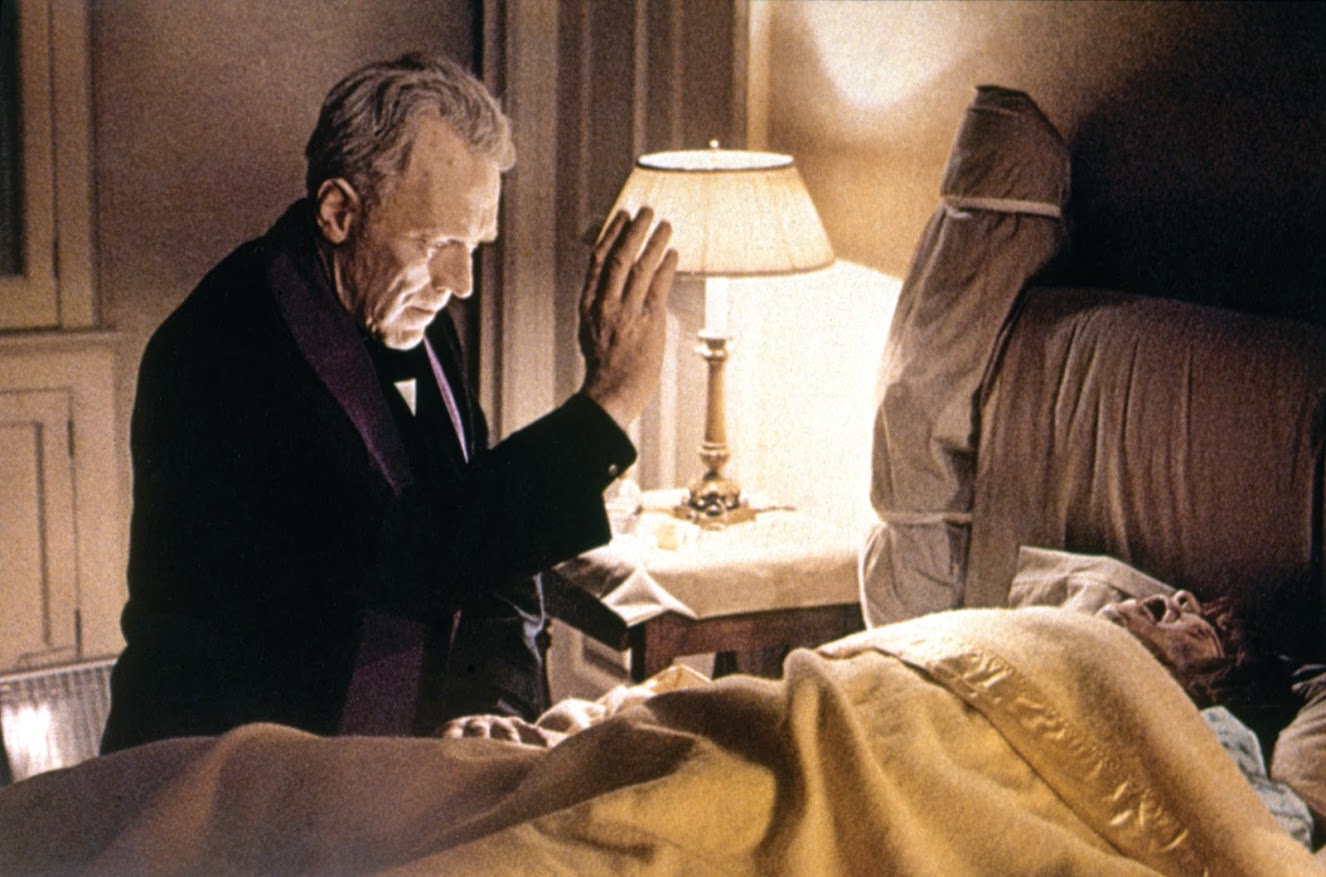 Released several years later, “The Exorcist” reached the same audience, but is a counter to “Rosemary’s Baby.” Although Father Damien Karras is burdened by doubt, his struggle ends with a moment of climactic grace. The critic Mark Kermode called “The Exorcist” “the greatest advert for Catholicism that the world has ever seen.” William Friedkin’s film is stylish without becoming baroque. Early shots of wind blowing the habits of nuns while they walk in front of the Georgetown campus complement the stirring, but not overbearing, piano theme. In the movie, an actress named Chris MacNeil is shooting a new film on campus and rents a home nearby with her daughter, Regan. Unlike Rosemary, Chris and Regan are not Catholic. But their unbelief, and Regan’s dabbling with a Ouija board, again serve as an invitation for evil.

Most of film’s dramatic action takes place in the MacNeil home. Chris’s drunk film director attacks her butler during a house party. Regan leaves her bed, walks downstairs and urinates in front of the guests—including an astronaut about to leave for a mission. She tells him, “You’re going to die up there.” Soon she is fully, violently possessed by the devil. The film’s macabre actions stain the sacred space of a home, so Chris must do the unthinkable for an unbeliever: trust in God.

In the years that followed “Rosemary’s Baby” and “The Exorcist,” Catholic-themed horror films were legion.

The drama of “The Exorcist” comes from the fact that God’s vessel is the imperfect Father Karras, a severe-looking amateur boxer turned Harvard-trained psychiatrist. Although Father Lancaster Merrin, a veteran exorcist, is recruited for the job, he is old and frail. Father Karras must carry the fight, but is weighed down by his wavering faith—and the terrible guilt he feels over abandoning his sick mother. In “The Exorcist,” Catholic grace—powered by Christ—ultimately breaks through the dark.

In the years that followed “Rosemary’s Baby” and “The Exorcist,” Catholic-themed horror films were legion. Certainly low-budget schlock went for cheap and heavy-handed scares at the expense of the church. But well-made, complex representations of Catholic culture, clergy and ritual regularly appeared in theaters. The 1970s would see the Oscar-winning “The Omen,” “Alice Sweet Alice,” “The Sentinel” and “The Amityville Horror.” Catholic horror remained popular throughout the ’80s and ’90s, with films like “Evilspeak,” “The Unholy,” “Angel Heart” and “Stigmata.” The trend has continued into the 21st century: “The Exorcism of Emily Rose,” “The Conjuring 2” and the recently released “The Blackcoat’s Daughter,” set on the campus of a Catholic school.

The appearance of a crucifix or a priest in a horror film does not make it Catholic. Rather, films in the tradition of “Rosemary’s Baby” and “The Omen” tap into the inherently dramatic and provocative elements of Catholicism. Ironically, the line from Rosemary’s hallucination about the yacht party being for Catholics only speaks to a perception of Catholicism as an American other, a religion of immigrants. Catholicism is visceral, palpable, tangible. It is a religion focused on the flesh and faith of the body, and Catholic Mass is a sustained performance of aural and spiritual transformation.

The theology in Catholic horror films is often tenuous. The church is often stereotyped. Yet the pull of Hollywood toward Catholicism is significant, and should be seen as an opportunity for reflection. Of all the genres of film, Catholic storytelling has made its widest, most consistent mark upon horror. Its portrayal of good and evil as both symbol and substance has made for storytelling that lasts long beyond the end credits. Whether practicing or lapsed, Catholics tend to be tattooed with their faith. Catholicism is a culture illuminated by ritual and deepened by tradition. The horror film genre is the perfect laboratory for Catholic storytelling. Fear and faith are inextricable.

Near the end of “Rosemary’s Baby,” Rosemary holds an issue of Time magazine while in a doctor’s office waiting room. The infamous cover asks: “Is God Dead?” Horror films offer a powerful, often disturbing dramatization of that question. Horror forces us to confront the evil in our midst. In “The Exorcist,” Father Merrin thinks the devil’s true goal is to make us “reject the possibility that God could love us.” The devil wants us to give in to despair. Whatever the outcome on the screen, a Catholic approach to horror means a devotion to hope even in the face of our worst fear.

Not all Catholic representations in horror films rely on typically negative stereotypes. In the Sixth Sense, Haley Joel Osment's character, Cole Sear, finds solace from his perplexing visions when he purposely visits his church and when he is in possession of his small saint figures in a private space in his home. Those were nice touches in an engrossing, tense film.