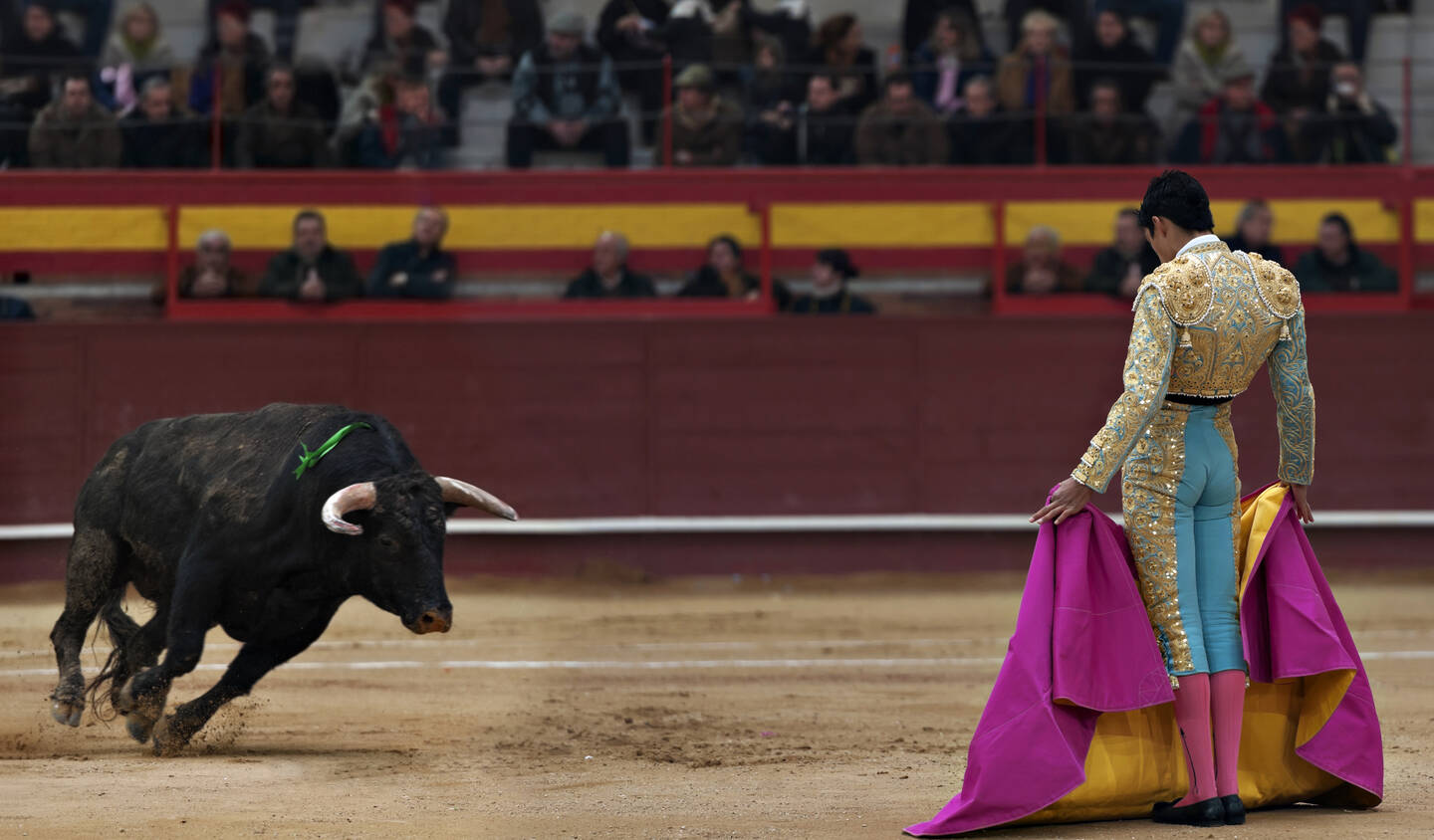 What I learned about my Catholic faith from watching a bullfight

“Bullfighting is not a sport—it is a tragedy,” Ernest Hemingway once wrote. And he ought to know. Having traveled to Pamplona nine times for the annual festival of San Fermin, a nine-day celebration that features the infamous running of the bulls in addition to a bullfight every night of the festa, Hemingway had become an aficionado of the art. He also witnessed bullfights in other cities across Spain, but for him, Pamplona was ground zero. He immortalized his passion for the experience in Death in the Afternoon (1932), his encyclopedic paean to bullfighting that chronicles its history, ceremony and traditions.

I have been to only two bullfights in my life. My first was when I was a 17-year old student visiting Madrid. Like most of the jovenes who lacked funds, I sat up in the nosebleed section, where the party was lively but the action was so distant the bull and matador looked like toy figures. My second one was this past July when I found myself in Pamplona during the San Fermin festival. In a month of traveling through Spain and Basque country, with each new town and city I visited, Hemingway seemed to be there. So it seemed apropos and inevitable that my accidental shadowing of him should culminate here, sitting in the same bullring he once sat in, the year of the 85th anniversary of the publication of Death in the Afternoon.

This second bullfight would prove a very different experience from my first. No longer one of the jovenes (alas), I had an excellent seat, sombra (in the shade), and four rows back from the action. I had traded, along with my youth, too far away for too, too close. I was able to see everything: the matadors in their impossibly tight pants, the pink-and-yellow capes they tossed about with a flourish, the long swords they would brandish and jam into the bull’s neck, and, of course, the central focus for the 20,000 spectators in the ring—the bull.

The bullfight enacts the human drama each of us participates in.

The bull enters the ring running. The first impression the spectator gets is what a gorgeous beast he is. There are six bulls killed in the course of a bullfight, each one chosen for his strength, agility, intelligence and temperament. (Hemingway claims they are bred to be “vicious.” Whether this is true or not is unclear. What is clear is that no matador wants to fight a placid bull.) Each enters the ring young, beautiful, magnificent, at the height of his powers, and at the end of the 20-minute bullfight, each leaves the ring dead, his bloodied body drawn across the dusty ring and out the main gate by a team of horses. This is the tragedy whereof Hemingway speaks. The creature explodes onto the stage, full of passion and purpose, and meets his death in the form of the aptly named matador (“killer”)—gradually, painfully, inexorably. As with any tragedy, it is hard to watch. We feel compassion for the bull—in part because we understand that the bull is us. The bullfight enacts the human drama each of us participates in. We all enter the arena of life unspeakably beautiful, and none of us gets out alive.

Bullfighting is not a sport—it is a tragedy. It is also a form of wish fulfillment. As the bull is enacting his drama, so is the matador. It is chilling, thrilling, terrifying to watch a thousand pounds of muscled animal run full bore at the slim, impeccably dressed man who stands before him defending himself with nothing but a cloth cape. It is an absurdity. The bull is death on four legs. Who among us would not take refuge in running (as hundreds of people did earlier in the day at the running of the bulls)? But the matador stands his ground. He taunts death. He prods death, poking him with banderillas. And he dances with death, arching and turning his body, making the most graceful of arabesques, his cape accentuating the arc of his movements, while the big, dumb beast that is death tries to catch him, to trip him up, to run him through with his terrible horns. This time it is not the bull that is us, it is the matador, doing what we all seek to do—evade our inevitable mortality.

Bullfighting is wish fulfillment because, unless something goes terribly wrong, the matador wins. After keeping death at bay, making it bend to his will, treating it with respect but also making it look like a fool—this tiny man and this great big bull—the matador kills him with a single sword inserted in the hump behind the creature’s head, aimed at the massive heart that beats beneath. It is a graceful, artful, consummately dangerous endeavor—as apt a description of life as of a bullfight. Only in the end, life wins. Death is brought to its knees, dispatched and dragged out of the ring. The matador lives to fight another day. 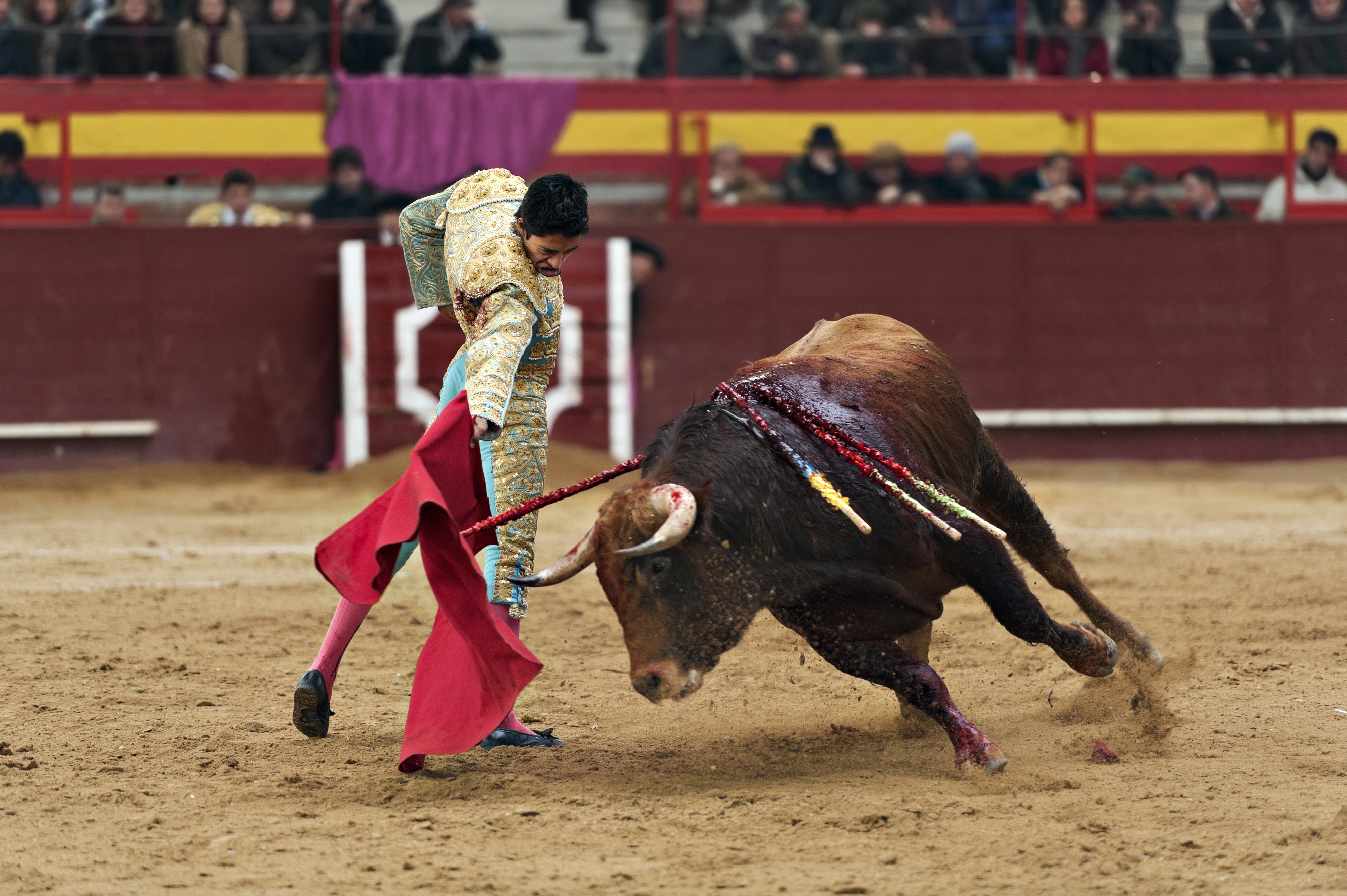 Bullfighting is alien to our sensibilities. It is, undoubtedly, cruel to the animal. It is a dreadful thing to behold a team of picadors, banderilleros and matadors conspiring to goad a fellow creature to anger and then kill him for purposes of entertainment. Sitting in the stands, watching the ritual unfold, we become complicit in the killing. We have come of our own free will to witness it. Our euros pay the salaries of the bullfighters and provide the fodder for the bulls. How can a person of conscience participate in such a brutal endeavor? Animal activists across Spain have been trying to ban the practice for years, and sitting in the stands four rows back in sombra, one can see why. I could have wept for the suffering creature. And yet, I watched. Watched with a level of attention I have rarely experienced. It was undeniably terrible. And it was strangely, savagely, beautiful.

I could have wept for the suffering creature. And yet, I watched.

“Anything capable of arousing passion in its favor will surely raise as much passion against it,” Hemingway wrote. Bullfighting aficionados oppose the claims of cruelty. They will tell you that the fighting bull lives wild in the forest for five years, eating and breeding, and dies after fighting for 20 minutes in the ring. His meat cow cousins live a scant 18 months in close captivity and meet their death in a slaughterhouse, standing in line, watching and smelling their fellows die helpless before them. There is nothing powerful or graceful about their deaths. They are never feared or revered. Their lives are not sacrificed, bull by bull. They die nameless and en masse. This I know because it has been told to me. I have never witnessed animals dying in a slaughterhouse, and I pray I never will. Yet I am complicit in this, too. I eat meat. I wear leather shoes.

Bullfighting has been taking place in Pamplona for over 500 years. Its roots are as much pagan as they are Christian, both of which traditions place great value on blood sacrifice. It is noteworthy that at the festival of San Fermin, men and women traditionally dress in white and wear red kerchiefs around their necks and red sashes around their waists. This symbolic clothing commemorates the death of San Fermin, patron saint of Navarre, who was martyred for his faith. The red garments recall his sacrifice, each man and woman at the festa enacting his beheading.

“The blood of the martyrs is the seed of the Church,” Tertullian once wrote. Without blood there is no faith, no resurrection, no salvation. The death of the bull is somehow part of this tradition. The animal is sacrificed. Its meat is eaten. Its death gives life. The killing is lamentable and necessary. It is a telling fact that the word blessing in English comes from the Old English word, blud. There is no blessing without blood. What I did not expect to discover during my two hours at the bullring is the deeply Catholic nature of bullfighting, the way the ritual echoes the sacrifice of the Mass. For, weirdly, the bull is Jesus, too—the beautiful god who must die, whose flesh is eaten and whose blood is drunk. This is not such a stretch as it might seem. In ancient times, among some cultures, the bull was regarded as a sacred creature and was thought to be divine. Bullfighting (as in Pamplona) took place in the context of a larger religious celebration. This might help to account for its irresistible appeal to the Catholic convert, Hemingway, as well as its appeal to the people of Spain, a country where Catholicism has taken bloody forms for centuries.

Bullfighting is not a sport—it is a tragedy. I watched six bulls die in Pamplona. I was moved by their deaths. I was moved by the respect the matadors paid to the bulls, as worthy opponents, by the way they spoke to them as they eased them toward their demise. I was moved by the fact that the ritual killing was carried out in the same way it has been carried out for centuries with the same denouement. No modern technology intervenes in the elemental encounter—no machinery, no high-powered weapons, no armor, no safety net. I watched a drama unfold in the same way it has unfolded for 500 years and more. I felt pity and I felt fear: for the bull, for the bullfighter, for us. I have been to only two bullfights in my life, but twice was enough. I have been marked indelibly by what I saw. Unlike Hemingway, I do not need to return to the bullring. After our month of travel together, we parted ways. For better or for worse, I carry the bullring inside me.

A more concise comparison might simply observe that they're both bloody and there's a lot of bullsh*t involved...

The humans have made a choice to be unspeakably cruel to a magnificent animal. The animal does not choose to be the victim in this horrible "tradition". How anyone with a conscience and soul would pay money to watch this spectacle, and write of its "beauty" makes me wonder about the state of the human race. I can only assume that bullfight fans either have no soul nor conscience, or they simply love displays of pomp and power so much that they will encourage horrible cruelty.

..........well...there's St Francis who would not approve and would see the bull as his brother. Duns Scotus would argue that the whole "blood atonement" idea was not the center of Christianity, as would any Franciscan. Of course this is a Jesuit paper............and then there's our old friend Ernest Hemingway who observed in For Whom the Bell Tolls that a Christian is a very very rare find in a Catholic country.................

But life ought to be a comedy. Even though the end of the material life is death and is painful and is full of torment and sadness, as Catholics we know that is not the end but truly the beginning. In fact, St. Paul puts is so well: "O Death, where is thy victory? O Death, where is thy sting?"