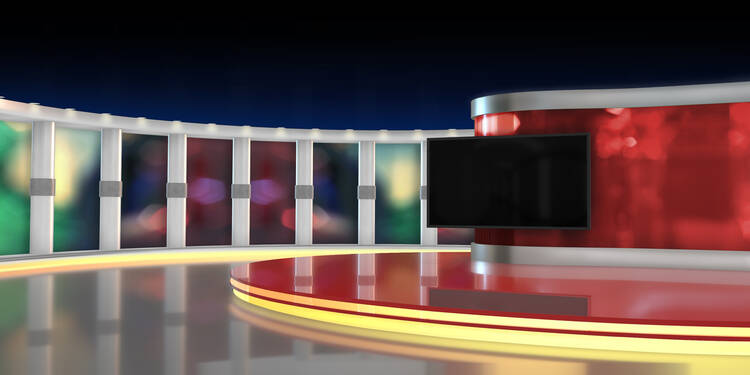 Given that many of you are likely reading this on the beach or in transit to your summer destination; and because the contents of this issue tackle some very serious topics, I thought I’d offer you some lighter fare here.

Welcome to “America Jeopardy!” The game is played like the real “Jeopardy!” except that you’ll have to wait for the answers, er, questions, in the next issue. But if you’re dying to know sooner, you can go to the web page with this column at americamagazine.org and see the answers/questions there.

Your category, obviously, is America. Good luck. And, as Alex always says, please remember to phrase your responses in the form of a question. For some reason, that’s important. Happy summer.

1. This New York Times best-selling author, a longtime member of the editorial staff of America, once worked in human resources at General Electric.

2. Charles W. Whelan, S.J., one of America’s longest-serving associate editors, was a first cousin of this famous TV mom and spokesperson for Wesson Oil.

3. This world-famous singer from Hoboken, N.J., once wrote a letter to the editor.

4. The editors of America got into trouble with Woodrow Wilson when they hosted a dinner for this man, who would later serve as the first president of Ireland.

5. This larger-than-life associate editor, who would later host a long-running, rapid-fire TV program about current affairs, once ran for the U.S. Senate in Rhode Island.

6. Gail Buckley, who has written for the magazine since the 1990s, is the daughter of the jazz legend Lena Horne and was married to this Oscar-nominated director of “Twelve Angry Men” and “Dog Day Afternoon.”

7. This world-famous conductor, who has hosted several concert specials on PBS, is known as “The Pope’s Maestro,” a nickname bestowed on him by the editors of America.

8. This longtime America columnist was included on President Nixon’s “Enemies List.” She won the 1975 Pulitzer Prize for commentary.

9. George W. Hunt, S.J., the 11th editor in chief, was a close friend of this writer, whose novel Being There was adapted into an Academy Award-winning film starring Peter Sellers.

10. This editor in chief, who later served as president of Fordham University, once sang “It Had to Be You” with Imelda Marcos, the first lady of the Philippines.

12. This U.S. politician, who has written for America on three occasions, served as the 55th governor of Louisiana.

13. This vice president of the United States attended the 50th anniversary gala for America. His future opponent, a Catholic, did not.

14. This longtime subscriber to America has three films listed on the American Film Institute’s top-100 list of the best American movies of all time.

15. This three-time America contributor served as a U.S. senator. His surprise showing in the 1968 New Hampshire presidential primary forced the incumbent, Lyndon Johnson, to withdraw from the race.

16. This novelist wrote a letter to the editor in 1974 to say, contra America’s review, that there was “goodness” in his novel The Exorcist.

17. This American businessman, whose company invented the Band-Aid, published a major essay in America on business ethics in 1945. The nation’s largest public health philanthropy still bears his name.

18. This man, who remains the longest-serving director in the history of the Federal Bureau of Investigation, wrote a letter to the editor in 1948 rebutting the charge that the F.B.I. was at risk of evolving into a “secret police.”

19. This granddaughter of the 26th president of the United States, who shares a name with a famous frog, wrote an article for America in 1968.

20. This six-time contributor to America won two Emmy Awards for Most Outstanding Television Personality. He is interred at St. Patrick’s Cathedral in New York.

21. This author of the novel Decline and Fall wrote an article for America in 1964.

22. Raymond A. Schroth, S.J., America’s books editor, was struck by police tear gas while covering this event in Chicago in the summer of 1968.

23. Daily Double: The name of this author, who wrote for America magazine 98 times, is included in the second episode of “Monty Python’s Flying Circus,” in the sketch “The Mouse Problem.” He is also the only regular America contributor who served as a member of the British House of Commons.

24. Final Jeopardy: This Jesuit also trained as a firefighter. As the 14th editor in chief, he’s been putting out fires since 2012.

[Scroll down for the answers.]

Martin recounts his journey from corporate America to the Jesuits in his book In Good Company: The Fast Track From the Corporate World to Poverty, Chastity, and Obedience.

2. Who is Florence Henderson?

Henderson played Carol Brady on “The Brady Bunch,” which ran on the ABC network from 1969 to 1974. She was also an accomplished singer and stage actress.

3. Who is Frank Sinatra?

Ol' Blue Eyes wrote a letter to the editor in 1990 to thank George W. Hunt, S.J., for the “many kind and wonderful words” in Fatherr Hunt’s recent Of Many Things column. “I was deeply touched that you took the time to write this lovely tribute in honor of my 75th birthday,” the singer wrote.

At the time of the dinner in 1919, de Valera was considered an enemy of the British government. He had come to the United States to raise awareness and funds for Irish independence. President Wilson was not pleased with the editors’ gesture (the British were an ally of the U.S. in World War I). In retaliation, Wilson allowed the British government to briefly ban America magazine in Ireland.

5. Who is John McLaughlin?

When McLaughlin was a Jesuit, he worked at America magazine until he was fired by Donald Campion, S.J., the editor in chief, who cited “irreconcilable differences” in their personalities as the cause for the dismissal. After losing his 1970 Senate bid, McLaughlin left the Jesuits and the priesthood and joined the Nixon White House staff as a speechwriter, taking charge of the “moral defense of the President.” McLaughlin’s long-running TV show, “The McLaughlin Group,” premiered in 1982 and ran until his death in 2016.

Gail Buckley continues to write for America. Her most recent book is The Black Calhouns: From Civil War to Civil Rights With One African American Family.

7. Who is Sir Gilbert Levine?

In 1994, St. John Paul II made Levine a knight commander of the Pontifical Equestrian Order of St. Gregory the Great (K.C.S.G.), the highest papal knighthood accorded to a nonecclesiastical musician since Mozart. “60 Minutes” then produced a profile of Levine called “The Pope’s Maestro,” leading many people to think that the CBS newsmagazine gave Levine the nickname. But the credit goes to America, who called him that first.

McGrory was a path-breaking journalist and the author of America’s popular Washington Front column. She won the Pulitzer Prize for her coverage of Watergate. She was a friend of both J.F.K. and R.F.K. and famous for her Boston Irish wit. She died in 2004.

9. Who is Jerzy Kosinski?

The Polish-American novelist was a frequent guest at America House. Tragically, he took his own life in 1991 at the age of 57.

O’Hare was the tenth editor in chief of America and the president of Fordham University from 1984 to 2003. As a Jesuit in training he was assigned to the Philippines, then a mission of the New York Province. It was there that the famous duet took place.

Avery Dulles was a longtime contributor and the first American theologian to be elevated to the College of Cardinals. He was the nephew of Allen Dulles, who served as director of the Central Intelligence Agency and was the son of John Foster Dulles, who served as Dwight D. Eisenhower’s secretary of state. Dulles International Airport in Washington is named for his father.

As a young man, Jindal wrote three times for America. He would go on to serve as governor of Louisiana from 2008 to 2016 and had a short-lived campaign for president in 2016.

14. Who is Martin Scorsese?

The films are “Raging Bull,” “Taxi Driver” and “Goodfellas.”

15. Who is Eugene McCarthy?

A devout Catholic, McCarthy spent nine months as a novice at Saint John’s Abbey in Collegeville, Minn., before leaving to pursue a career in politics. He died in 2005.

16. Who is William Peter Blatty?

William J. O’Malley, S.J., a frequent contributor to America,had a part in the film adaptation of The Exorcist.

17. Who is Robert Wood Johnson II?

Johnson was introduced to Martin D’Arcy, S.J., a British Jesuit, by their mutual friend Evelyn Waugh in the 1940s. D’Arcy arranged to have Johnson’s third marriage to a ballerina, who was a devout Catholic, blessed by the church. Johnson’s home in New Jersey now serves as the New Jersey governor’s residence.

The (in)famous F.B.I. director would later bug Martin Luther King Jr. and engage in all manner of surveillance activities that are arguably characteristic of a “secret police.”

19. Who is Edith Kermit Roosevelt?

The granddaughter of T.R., Roosevelt was a successful newspaper columnist. In my first job after college, I worked for Mark Roosevelt, great-grandson of T.R. and Edith’s first cousin once removed, in his unsuccessful bid to unseat William Weld as governor of Massachusetts. At the time, Weld was married to Susan Roosevelt, who was Mark’s first cousin and also a T.R. great-grandchild. Yep. We too could barely keep it all straight.

This was the only time that the author of Brideshead Revisited wrote for America.

22. What is the Democratic National Convention?

Schroth has one of the longest associations with America in its history. He first wrote for the magazine as a young Army officer stationed in Europe in 1957.

The controversial Belloc had one of the most prolific literary careers of the 20th century.

Matt Malone, S.J. is editor in chief at America.