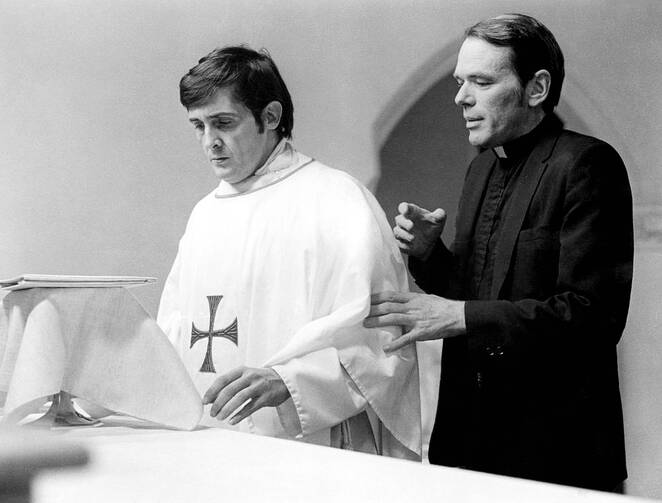 William J. O’Malley, S.J., a longtime teacher at McQuaid High in Rochester, N.Y., and Fordham Prep in the Bronx, N.Y., advised and acted in the film “The Exorcist,” based on the novel by William Peter Blatty. Mr. Blatty died Thursday at the age of 89. America asked Father O’Malley, a longtime contributor, to remember how his collaboration with Mr. Blatty began.

When I lived in Rochester, N.Y., the downtown public library had an oral book review called “Books Sandwiched In” during lunch every Tuesday. I was teaching at McQuaid, and the library invited me to review The Exorcist. I hadn't read it, but I knew it had been selling since God was a child and I couldn't possibly hold out much longer. I read the book alone in a lakefront cottage over a weekend, and l was so impressed I wouldn't douse the light when I finished. I'm a reasonably intelligent man and I know no demon is going to materialize next to my bed. Nevertheless.

I knew Bill Blatty had gone on scholarship to Brooklyn Prep, where I myself had later taught, and had attended Georgetown, so I wrote the review, got his address from one of his old Jesuit teachers and sent it to him. Almost immediately, Bill answered, saying he had written the book as a very long thank-you note to the Jesuits for his education. He did point out two things he found faulty in my review.

One was that I had missed the whole point of the book (admittedly a flaw). He said his intention was right there toward the end when, after the first excruciating exorcism session, the mother asks the doubtful young priest why God would allow such an assault on a young child. The priest answers, “To make us despair. To make us feel we would be beyond even God’s contempt, much less his love.” In other words, God makes us feel lost in order to show us our need to be found. That was the core of Bill Blatty. He never lost that conviction of divine love.

Bill also took issue with my critique that the two Jesuits in the book were too icily witty or, in Bill’s words, “cutsey flip.” Bill said his Jesuit teachers were like that.

In his letter he invited me to join him for dinner on an upcoming trip from L.A. to New York. I asked my superior for permission to fly to New York for dinner. He rolled his eyes heavenward and conceded. At said dinner, I was really on a trot. Needless to say, I was trying to impress him. This was the first instant millionaire I'd ever met. (Bill described himself as “a poor Lebanese boy from Brooklyn.”) But after about a half-hour I suddenly stopped myself and said, “D’ya know what I’ve been since I sat down?” Bill said, "Yeah. Cutesy flip.”

Two weeks later, I got a call from Bill at Warner Brothers asking, "Howjalike to play Father Cutesy Flip?" To a guy who directed 99 high school plays and musicals, that was like Charlie Brown being asked if he’d like a season with the Yankees.

That was 45 years ago, and we’ve been friends ever since. But he’s left me very sadly without a final riposte. He leaves a large empty space in a lot of lives.

William J. O’Malley, S.J., is a professor of theology and the author of many books, including The Fifth Week and God: the Oldest Question.

Show Comments (
2
)
Comments are automatically closed two weeks after an article's initial publication. See our comments policy for more.
Stanley Kopacz
6 years ago
Too cool. Never knew the portrayal of Father Dyer was by a real priest, let alone the Father O'Malley we all know and love reading here. Glad you weren't lured away from your "day job" to an acting career, though you were great in it.
Philip Frey
6 years ago
I went to McQuaid where Fr. O'Malley taught and he was my first director. His approach did a lot to show me not only how to treat the actors I direct today, but how to make theater comfortable for non-actors or people with less experience. I have, of course, known about his involvement with "The Exorcist" since those days, but it's wonderful to learn he remained friends with Blatty until the end.