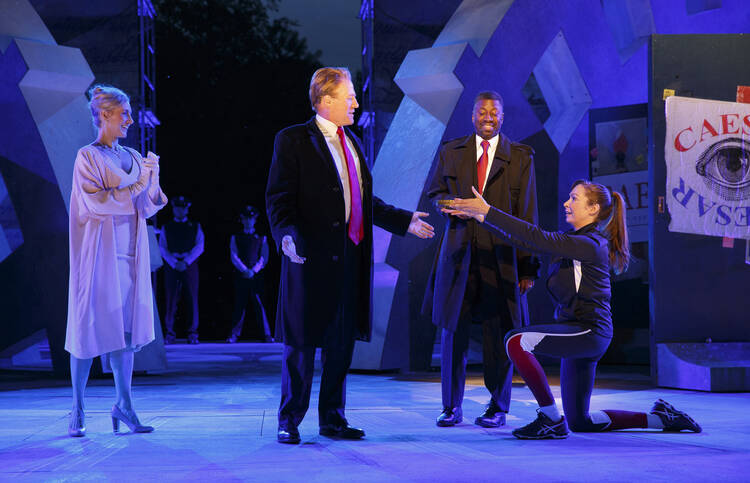 The “Julius Caesar” staged by the Public Theater in New York City has lost sponsors because of the director’s choice to style Caesar after President Trump (complete with a Slavic-accented wife Calpurnia), setting the stage for the brutal murder of someone who looks a lot like our sitting president. But when I saw it, I was less bothered by any implicit threat of assassination than by the way the production distorted the timeless play in an unnecessary bid for relevance.

The play comfortably stands on its own; the actors were talented and at their best in the scenes that were not encumbered by pussy hats, gold-plated bathtubs and other visual ties to the current political moment. I would have loved to see them stage the show straight. Thankfully, I am getting a chance at a do-over.

I was less bothered by any implicit threat of assassination than by the way the production distorted the timeless play in an unnecessary bid for relevance.

I have spent this week rehearsing for an amateur, seat-of-our-pants production of “Julius Caesar” (planned before the Shakespeare in the Park controversy). Our cast of eight is putting together the show over five nights of three-hour rehearsals squeezed in after work each day. Learning my lines on this schedule is the closest I have ever gotten to a runner’s high: that combination of pain and exhilaration. Pressed for time, I have practiced only my cues and my replies. In rehearsal, I am constantly startled by the lines of my scene partners, which I have not gotten around to reading ahead of time.

It is not the ideal way to prepare a professional production (though it does resemble the methods of Shakespeare’s actors, who each had only cue scripts, not complete texts), but it has a breathlessness to it that feels particularly apt for this play. Conspirators, soldiers and plebeians alike are constantly overtaken by events; their only moments of silence are sickly, not peaceful.

One of the most potent pauses follows Caesar’s famous lines “Et tu, Brute?” and his death. Before Cassius attempts to rally his allies with shouts of “Liberty! Freedom! Tyranny is dead!” the conspirators stand in awed silence that quickly becomes awkward.

Conspirators, soldiers and plebeians alike are constantly overtaken by events; their only moments of silence are sickly, not peaceful.

But their pause is too short to be able to plan the next move. Soon Mark Antony is there, and they must decide in that moment whether or not to kill him. They let him live, and he stirs up the populace. The last act of the show is a carnival of death.

Brutus, the protagonist and one of the lead conspirators, embodies the exhaustion of the story. He spends the show not sleeping. He paces in his orchard; his wife complains of his unquiet; he summons servants in the middle of the night and then regrets keeping them from bed, saying, “I should not urge thy duty past thy might, I know young bloods look for a time of rest.” But he finds none himself, agitated by sorrow, unable to collect himself.

In acedia, we fail to love the world but do not turn our love to any other object either.

The frenetic activity of my parts in our way-off-Broadway production feels rooted in acedia, one of the seven deadly sins. Acedia is frequently rendered in English as “sloth” but can also be understood as “sorrow.” In the adult Sunday school at my church, the Dominican friars taught us that St. Thomas Aquinas contrasted acedia with vainglory or pride. In vainglory, we love ourselves too much, letting that love eclipse our love of God and others. In acedia, we fail to love the world but do not turn our love to any other object either. Aquinas sees acedia as the source of not only of faintheartedness but spite (a sour-grapes-style downgrading of the thing we ought to love) and distraction (filling our lives with busyness to keep us from having the leisure to love as we ought).

A 'Richard III' for our unsettled times
David Stewart

Something of that restlessness seems to have motivated the Public Theater’s staging. Rather than anchoring the production in Shakespeare’s text, the play went chasing the current zeitgeist, the same way Twitter erupted in “covfefe” memes after President Trump’s famous typo. Being quick to retweet and to riff does not make us rightly responsive; it can be a way to outrun our responsibilities.

I will be glad to get some sleep when our “Julius Caesar”closes this Saturday, and I can stop living the fevered life of Casca the conspirator. In my examination of conscience, I will try to stay on guard against recasting myself in his role: someone who cannot respond virtuously to tyranny because he has become unrooted from his proper loves.

Leah Libresco, contributing editor for America, is the author of Arriving at Amen: Seven Catholic Prayers That Even I Can Offer.

The real mystery of Caesar is why he was assasinated? He was about to leave a Rome for several years to first conquer the Persians and then after that to pivot and conquer Germany. That is why Octavius or Augustus was in Dalmatia with several legions at the time of the assassination.

So why kill someone who was about to leave Rome for 2-3 years?

Julius Caesar had become the sole dictator of Rome after a edging Pompey in a civil war, leaving Rome as a Republic in name only... and had been a lover of Brutus' mother.

I guess further military successes would have put JC beyond anybody's control, though I doubt he could have conquered the Persian Empire, as Alexander The Great had done some three centuries before.

J. Cosgrove The Roman republican system was under stress for a generation or two before Caesar came along due to some individuals gaining to much power without their traditional checks and balances coming into play. First Marius, the man who reformed the military system of the legions from a citizen's militia into a long serving professional body gained such power. He had a list of those to be proscribed. Then came Sulla and he had a list also. Pompey wasn't around long enough to have a list. Finally Caesar came and there was fear that he would have a list too. Those who were proscribed, meaning on the list, would often commit suicide in order to avoid formal criminal conviction in a kangaroo court and thus save the family property from being confiscated. Some men were listed just because they were wealthy. The Roman republican system evolved to govern a geographically small city-state, but they gained territory so fast they just couldn't cope.

My point was that Caesar was leaving Rome in a short time so why kill him when he would be gone for several years and possibly end up dead or extremely compromised by military losses. I had asked a couple classicists one time on a trip where they were lecturing on the Roman empire and they had no answer. Thank you for your input.

Can you imagine the uproar if such a play would have been adapted a couple of years ago? An adaptation about a Julius Caesar awarded the Nobel Peace Prize because of beautiful speeches, but having no quarrel fueling the fire in the Middle East with covert and open support for ISIS/al-Qaeda and "moderate" terrorist groups. And what if the play instead of being sponsored by Time Warner and the New York Times was by Drudge Report and Infowars? Just imagine.

With their Russian interference narrative having produced no fruits so far, the declining and disrespected MSM is now openly poisoning the public, entertaining the idea of assassination against the current President.

America goes out of its way to provide anti-Trump articles which could be at best described as fake narratives so I find this one amazing as the author is not bothered by the pictured assassination of our president, given the rhetoric that has permeated the country in the last 6 months.

I was less bothered by any implicit threat of assassination than by the way the production distorted the timeless play in an unnecessary bid for relevance.

A play put on with public money which shows the assassination of the current president doesn't bother the author but its artistic merits does. Where does America find these people? Who approves the topics and content?

I was appalled to hear that the President was being portrayed as the victim of assassination, and shocked to hear that the same thing had been done with President Obama. I understand why such a strong reference to current events would be interesting (though way too heavy-handed for art) but given our history of political violence, it seems obscene to me. I didn't vote for Trump, but I could not sit in a theater in which his killing was presented for entertainment. From what I have read, the play mocks Trump and kills him. Must have been great fun for the haters, but seems cheap and dirty to me.

I thought the best part of this review is Ms Libresco's thoughtful reflection on the sin of failing to love. I had never encountered this concept before, but have often thought about my own morality in similar terms - when I have felt shame or regret, and have reflected on the root cause, it has always been found in my failure to commit to love - of letting a gap exist between myself and my "proper loves" to borrow a phrase of the wise Ms Libresco.

Sent to the Public Theater:
"As Mr. Eustis said last week, when interviewed on NPR, the consequence of the insurrectionists’ actions was to set back the cause of democracy in the West by two thousand years." Mr Eustis 's rewrite of "Julius Caesar" showed his total ignorance of Roman history as he stated that his interpretation was to show the fragility of "democracy", Julius Caesar was hardly a democratic leader, the Roman Empire was not a democracy and for that he was murdered not by the people but by political opponents. This play as played is not about the killing of a President but the destruction of the Presidency and is totally dishonest by not pinpointing the real potential assassins of President Trump, democratic politicians, intelligence agents and FBI leakers, the CBSNBCABCCNNMSNBC anti-Trump cabal and Mr.Eustis and his supporters.
No American should be supporting any event or play that borders on treason.