The view from Trump's America and other timely Broadway tales 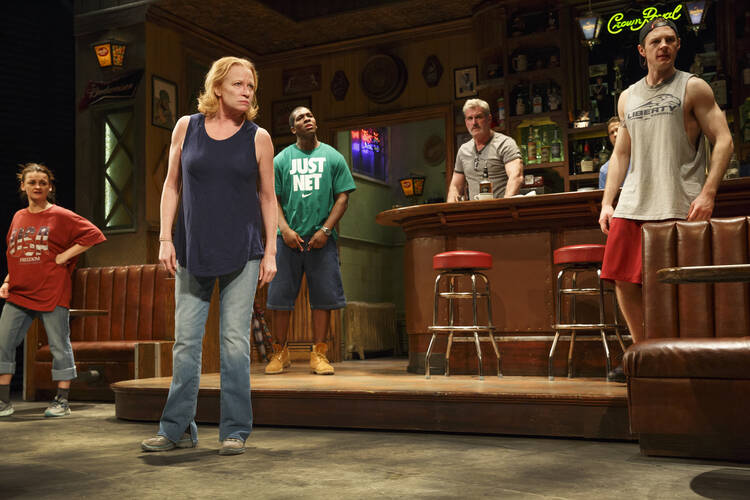 The brand name “Broadway” is not a synonym for “musical,” but you are forgiven if you think otherwise. Musicals are inarguably the economic engine of the American theater, not only in the New York district designated by a combination of seating capacity and location as Broadway but across the country. (Think of how many high school theater programs subsidize their dramas, if they do them at all, with a big-selling spring musical.) But most of the iconic American plays that are widely revived and revered either started or ended up on Broadway, including “The Glass Menagerie,” “Death of a Salesman,” “A Raisin in the Sun,” and nearly the entire oeuvres of Neil Simon and August Wilson.

This tradition has dissipated somewhat, as most new-play activity has retreated to Off-Broadway and regional theaters. But the straight play on Broadway is far from extinct. In fact, if you measure simply by the number of shows that open in a given Broadway season, plays run roughly even with musicals. Of course, plays never garner the income of musicals, and none turn into years-long cash cows; there is no straight-play equivalent of “The Phantom of the Opera” or “The Lion King.”

The Broadway season that just ended felt like an exception—not to the iron rule of the box office, surely, but to the notion of show business as usual. To wit, five new plays by living American writers opened in the spring, all of them ambitious or topical to one degree or another, all of them finely crafted, and only one of them featuring stars (Laurie Metcalf and Chris Cooper in “A Doll’s House, Part 2”). They have fared variously, and not necessarily according to their relative merits. But regardless of their financial fortunes, you can expect to hear more of them; one thing a Broadway address can guarantee a show is publicity, which typically translates into future productions.

The Broadway season that just ended felt like an exception—not to the iron rule of the box office, surely, but to the notion of show business as usual.

“Sweat” is the most arrestingly timely of the lot (it won this year’s Pulitzer for drama). Set in Reading, Pa., in the early 2000s, Lynn Nottage’s play tells the story of steelworkers whose long friendship unravels as their livelihood is threatened by forces all too familiar from our current political divide: free trade and immigration. The fault lines of the play’s fractures are also familiar, though not just from recent headlines: race, class and the interlacing of the two. Best friends Tracey (Johanna Day) and Cynthia (Michelle Wilson) are both up for a promotion at the local factory where they have worked for decades, as rumors of layoffs swirl. When Cynthia, who is black, advances into management over Tracey, who is white, the collision seems tragically inevitable, particularly as the downsizing turns out to be more than a rumor and Cynthia’s thankless new job description seems to include busting the steelworkers’ union. The split between these besties ripples down to their adult sons, Jason and Chris, with an ugly new wrinkle: They find a convenient target for their shared anger in the Colombian barback at the neighborhood tavern where most of the play’s action takes place.

The relevance of these conflicts to the era of President Trump—who won Reading’s Berks County handily last November—need hardly be underlined. At its best, “Sweat,” which was commissioned by the Oregon Shakespeare Festival and written well before the 2016 campaign and election, bears prophetic witness to the fraying of the social contract underlying the American dream. But the problem with social realist tragedy in the tradition of Clifford Odets and Arthur Miller has always been its very inevitability. As Hegel defined it, genuine tragedy is not a conflict between right and wrong but between two rights, but “Sweat” ultimately puts its finger on the scale of outrage, with diminishing dramatic returns. Nottage could hardly have known when she wrote it that her play’s bleak ending would feel like a foregone conclusion, but that’s how it plays now.

The relevance of the conflicts in "Sweat" to the era of President Trump need hardly be underlined.

The writer of this year’s Best Play Tony winner, “Oslo,” J.T. Rogers, knew his story’s ending, and so do we, as we watch the backstage machinations of secret peace talks between Israel and the Palestinians that gave rise to the Oslo Accords of 1993. As two charmingly anxious Norwegian diplomats, Terje Rød-Larsen (Jefferson Mays) and Mona Juul (Jennifer Ehle), cajole and manipulate their own leaders as well as Middle Eastern and American diplomats into a series of tenuous one-on-one exchanges, we can anticipate both the historic handshake at the White House between Yitzhak Rabin and Yasir Arafat and the collapse into violence that would follow—not to mention the metastasizing conflicts all across the Arab and Muslim world that present ever greater pressure on diplomacy. But Rogers, abetted by director Bart Sher and a superb cast, manages to be both true to the desperate fragility and urgency of the process and alert to the hopeful lessons it might provide, despite its particular failure to stick. It doesn’t hurt that “Oslo” often plays like a frothy boulevard comedy of outsized personalities and surprising twists, all without trivializing the issues at stake. This is almost as remarkable an achievement of boldness and tact as the accords themselves.

“Indecent” also does justice to a sobering history with judiciously employed pizzazz. In telling the story of Sholem Asch’s 1907 play, “God of Vengeance,” from its roots in Jewish Poland to its controversial U.S. run in the 1920s and beyond, playwright Paula Vogel and director Rebecca Taichman (who is co-credited as an author) create a quasi-musical of immigrant diaspora and the irrepressible power of theatrical expression. It is almost too much material for a single play, as “Indecent” tackles both the play’s purported anti-Semitism and the element that was even more incendiary about it, and led to its Broadway run being shut down for obscenity: its sympathetic depiction of a lesbian relationship, capped by a passionate consensual kiss.

That this relationship is embedded in Asch’s larger critique of religious hypocrisy—the patriarch of “God of Vengeance” is a devout Jew who runs a brothel in his basement—doesn’t interest Vogel and Taichman as much as Asch’s deep skepticism about the promise of assimilation in Europe and the United States, which turns from paranoid imaginings to shattering reality. Ultimately “Indecent” is less a coherent argument than a kind of spirited patchwork pageant for a dying language and art form, Yiddish and Yiddish theater, retold by a chorus of the dead, with a message for the living that bears ritual repetition: Never forget.

Forgetfulness is not the fate of Nora Helmer, no matter how she may wish it were. The lead in “A Doll’s House, Part 2,” as she was in Ibsen’s epochal 1879 drama, Nora (Laurie Metcalf) was last glimpsed staging the most famous walkout in theater history, leaving behind a stifling marriage to the banker Torvald (Chris Cooper) with a slammed door. She hasn’t looked back until now, some 15 years later, having achieved success as a novelist, with some unexpectedly unfinished business. The household she left behind—not just Torvald but a long-suffering maid, Anne Marie (Jayne Houdyshell), and a now-adult daughter, Emmy (Condola Rashad)—has some unsettled scores too. If Lucas Hnath’s lean, entertaining play comes off a bit like fan fiction as written by Tom Stoppard, it is greatly aided by Sam Gold’s clear-eyed production, and especially by Metcalf’s transfixing lead turn, which is practically a text unto itself. Few actors bring as much sense of a life lived outside the theater onto the stage with them, and this role is ideally suited to that quality of Metcalf’s, as Nora must carry both the baggage of the intervening years and the burden of a still unrealized egalitarian vision for the world. Nora’s capacious mind is always at least partly elsewhere, racing against the confinement of the here-and-now, and Metcalf makes that preoccupation fiercely present.

August Wilson will not go quietly: a review of 'Fences' and 'Jitney'
Rob Weinert-Kendt

Hnath’s cheeky riff is especially welcome in a season thin on the usual revivals, represented by a divisive, stripped-down take on “The Glass Menagerie,” also directed by Gold, and a solid staging of Lillian Hellman’s “The Little Foxes” at Manhattan Theater Club. Even in the realm of straight plays, Broadway loves a familiar face. And Ibsen’s conflicted feminist icon Nora might just be the flinty, unsatisfied 21st-century hero we need.