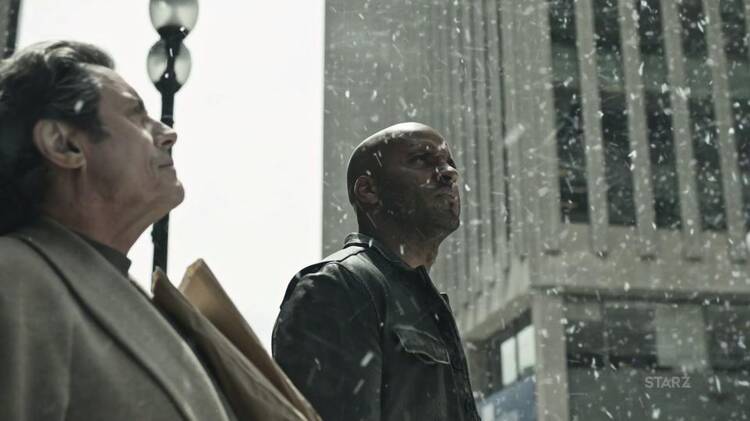 Each week we are gathering four superfans of the show—two Jesuits and two Jesuit grads—to discuss some of the themes and pull out the central questions. You can read our take on Episode 2 here. Send us your thoughts and reactions either via email or in the comments so we can add them to the conversation.

Relationship between humans and gods

Wyatt Massey: The question of belief is crucial. What does it mean to believe in something? What does it mean for us, and does it matter to god? This episode makes clear the gods’ dependence on humans. The only things that scares Mr. Wednesday “is being forgotten.”

Jim McDermott, S.J: I was also intrigued with the episode's more symbiotic relationship between gods and humanity. The encounter between the djinn and salesman is incredibly loving and mutual, even before the sex. (The show’s director, Bryan Fuller, has promised that these characters will be back at some point.) And the opening scene with Anubis seemed similarly framed. The woman was blessed and accompanied as a result of what she had previously given.

Eric Sundrup, S.J.: What are we to make of this mutuality/dependence thing between gods and humans? Does that tell us anything about America and her gods? The show has mentioned several times that this country is a rough place for gods. So what is going on with us as Americans? Are we resistant to giving the gods the mutuality that they crave?

Jim: Just a quibble—I'm not sure I'd say the gods crave mutuality. Seems to me more like they desire worship, straight up. That's what feeds them.

Eric: Fair enough. They really do crave worship; at least Mr. Wednesday is really driving for that angle. Does that leave any room for mutuality?

Jim: It's funny, my brain is all about the mechanics. Does killing yourself or someone in honor of a god yield more energy/power/life for that god than going to church?

Wyatt: Mr. Wednesday is certainly obsessed with such devotion. Zorya Vechernyaya thinks her home is enough, but Wednesday insists she needs “a court to adore you.”

Jim: I keep wondering if Shadow is somehow Mr. Wednesday's battery? Like he needs him to have power?

Alex Guyton: It seems so. The book suggests that if a death is dedicated specifically to a god it’s more powerful for them. Of course, we also have a djinn in this episode and I don't think the djinn were ever worshiped in their own time, were they? They just need belief in them, not necessarily adoration. Which makes Salim and the djinn's interaction a little less high stakes for the djinn. It almost seems enough for him that Salim recognizes him for who he is.

Jim: I think some gods are up for mutuality more than others. Nancy could have had a boat full of worshippers and went instead with them killing themselves for him, as did Mr. Wednesday to a lesser degree with the Vikings.

Alex: I think part of that comes back to Mr. Wednesday's claim that America is the only country that wonders what it is: "No one wonders about the soul of Norway or the heart of Mozambique. Mozambique knows what it is." If Americans are so uncertain about who we are or what our country is, it's not difficult to imagine that uncertainty also being present in who or what we worship.

Eric: Yeah, there is plenty of evidence in our lifestyles and in the way American’s are portrayed in this show that our high level of existential uncertainty keeps us hopping from one idol or god to the next.

Eric: I can’t get Mr. Wednesday’s comment to Shadow out of my head. On the car ride Mr. Wednesday flat out tells Shadow that belief changes reality. I love that. Heck, I believe that. But at the same time it frightens me.

Wyatt: It’s more difficult for Shadow (or adults) to come to belief. There’s much more experience or data to contradict pure belief. I think of Shadow needing affirmation and explanation for how he could create a snowstorm just by imagining it. Mr. Wednesday can’t understand why Shadow doesn’t merely accept the reality, while Shadow can’t square the reality with science.

Jim: Maybe it's something to do with the risk that belief poses? Like, maybe the world is actually way scarier if you do believe? (He says having assumed he would spend his life teaching college English and instead got kidnapped by Jesus in the night and 25 years later is a priest tap dancing for his supper.)

Alex: I appreciated that even when Mrs. Fadil is being rewarded for her belief, and spends the day with Anubis, and takes part in the whole weighing-of-the-soul shindig, her last words are still words of doubt about whether or not he's the right god to follow.

Jim: That's such a great catch, Alex. That's right—even at the end, she's not sure. I love your take on that.

Jim: LET HER SEE HER TITA, FOR GOD'S SAKE.

Eric: I’m still stuck on Shadow and Mr. Wednesday discussing the conditions for belief. Shadow is scared of being deluded. He doesn’t trust his feelings—delusions “feel real.” He has a great line: “I’ve...I’ve crossed enough paths to know that one in four people are rock stupid. Even the smart ones have got some kind of delusion they believe in, whether it’s gods or ghosts.” And that’s the line the triggers Mr. Wednesday to use the example of love. “So you didn’t believe till you did, and then the world changed because you believed. Belief is only a product of the company we keep and how easily we scare.”

Wading through the strangeness of 'American Gods' episode 2
Wyatt Massey

Jim: I absolutely resonate with the idea that belief is in large part connected to relationship and proximity. It's in how others see the world—and how our relationships with one another affect our perspective—that our beliefs come about. I actually think it sounds like more of a challenge to Christianity than it is. It sounds relativistic: There's no truth but what we discover from one another. But I think the point is that there is truth, and we help one another discover it.

Eric Sundrup, S.J. is an Associate Editor and Director of Audience Development at America. He is overjoyed that reading and watching America Gods now counts as “work.” @sunnydsj

Jim McDermott, S.J. is a screenwriter and the Los Angeles Correspondent for America. @PopCulturPriest, tinyletter.com/jimmcd

Wyatt Massey is an O'Hare Fellow at America, writing about social justice and producing podcasts. He is an introvert, runner and self-diagnosed health nut. @news4mass