A Muslim scholar sets out to investigate Jesus Christ 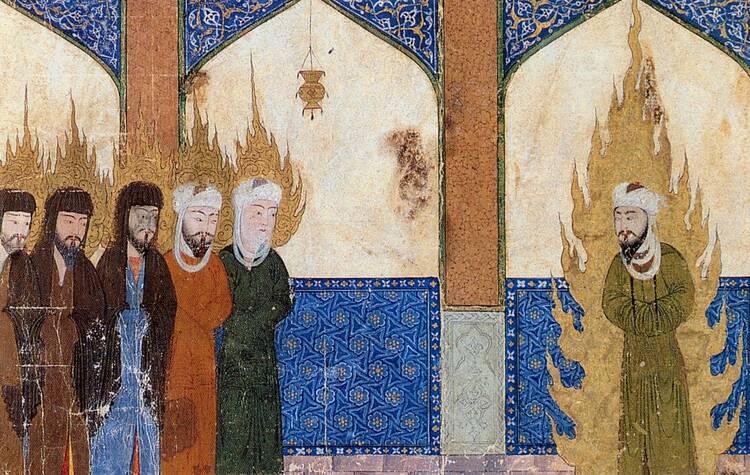 Mustafa Aykol, a practicing Muslim who writes a column for The International New York Times, begins his book by relating how one day in Istanbul he received a copy of the New Testament from a Christian missionary. Before going to sleep he opened it to the Gospel of Matthew and quickly became fascinated. Within a couple of weeks he had finished the entire New Testament. While there were parts of it he as a Muslim could not accept, much was not contradictory to his own faith, and parts were strikingly similar to the Quran. Like a good investigative journalist, he began a study of the Jewish, Christian and Muslim sources that come together in the story of Jesus of Nazareth. This book is the result.

The book traces the complex relations between the Gospels, Judaism and Islam. From the beginning the author contrasts Pauline Christianity, with its emphasis on the divinity of Jesus, with early Jewish Christianity, especially as it comes to expression in the “Q” sayings source, the Epistle of James and later Jewish-Christian sects like the Ebionites. How to explain the startling connections between the theology of the Jewish followers of Jesus who saw him as the promised messiah but not divine and the Arab followers of Muhammad?

Jesus is honored in the Quran as born of the Virgin Mary, the Messiah of the Jews and a reformer but not divine; he appears in 93 verses in 15 different Quranic chapters. Akyol shows parallels between a number of Quranic stories of Jesus and Mary with some of the apocryphal gospels, the Protoevangelium of James, the Gospel of Pseudo-Matthew, the Arabic Infancy Gospel and the Infancy Gospel of Thomas—for example, the story of Jesus making birds out of clay and then giving them life—imaginative stories rejected by mainstream Christianity. As a Muslim, Akyol believes in the Quran as divinely revealed, though he suggests that the similarities show that the Quran was in dialogue with various traditions present at its time of origin, both the apocryphal gospels and various Jewish-Christian sects, some of which believed in the virgin birth. He sees another parallel in the expression “Two Ways,” appearing in both the Didache, a late-first-century Christian text, and the Quran, which offers salvation to those who are devoted to God and benevolent toward other humans—in other words, salvation through faith and good works, not “faith alone,” as in the Protestant understanding of Pauline Christianity. This is the teaching of Jewish Christianity, reflected in the Epistle of James.

But his contrast of early Jewish and Pauline Christianity is much too facile. He falls into an approach first popularized by liberal Protestant theology of speaking of the “Platonization” (or Hellenization) of Christianity, making recognition of the divinity of Jesus a late development, an approach long since abandoned by mainstream scholars. The church’s high Christology is rooted in the Jesus of history, in his use, at the time unprecedented, of the familial term Abba in his prayer, the fact that he referred to himself as “Son” and in his claim to authority to interpret the Mosaic law and proclaim the forgiveness of sins, both of which scandalized his contemporaries. Theologians as critical as Walter Kasper and Edward Schillebeeckx find evidence that Jesus understood his death as tied in with his mission, promising his disciples a renewed fellowship beyond it.

Akyol does not seem to appreciate how the church’s Christological language developed slowly within the New Testament period as the early Christians reread their experience of Jesus against their Jewish tradition. For example, while Mark’s Christology is still inchoate and his use of “Son of God” did not mean what it would mean two decades later, there are clues that he is struggling to express a mystery that goes beyond the language available to him. His account of Jesus walking on the water is clearly a theophany, using the expression, “He meant to pass by them” (Mk 6:48), jarring in context, to echo a verse in the Book of Job where Yahweh walks on the “the crests of the sea” and might “pass by” (Job 9:8, 11).

From the beginning, both Jewish and gentile Christians used the divine title “Lord” (Mari or Maran in Aramaic, Kurios in Greek) for Jesus. The Septuagint, the Greek translation of the Hebrew Scriptures (third to second centuries B.C.E.), used Kurios to translate the Hebrew Adonai, which took the place of the holy name Yahweh. Jewish Christians used Mar to avoid pronouncing the divine name. Even the Epistle of James refers to Jesus consistently as “Lord” or “the Lord Jesus Christ.” Larry Hurtado points out that Paul can use the Aramaic invocation Maranatha, “Our Lord, come” (1 Cor 16:22), to his largely Gentile church at Corinth without translating it, as it was certainly familiar to them. He notes that Jesus, from very early in the Christian movement, was the object of the prayer and worship ordinarily reserved for God and that there is evidence of pre-existence theology even prior to Paul. Akyol pays little attention to the Gospel of John beyond commenting on its high Christology. But John is a very Jewish Gospel; its Prologue, which most probably predates the Gospel, speaks of Jesus as the divine Word, active in creation, a recasting of the Wisdom theology that developed in the late Old Testament.

In spite of the author’s efforts to explain the church’s Christology in terms of an aberrant tradition, there is much to recommend in this study. Akyol writes with a clarity that is admirable, and the book is well researched. (The footnotes take up 55 pages.) He finds common themes within the Scriptures of the Abrahamic religions, the People of the Book, a term originating in the Quran. Both Muslims and Christians can learn from it. Muslims might see in the example of Jesus inspiration to focus on the spirit of their tradition rather than legalistic or fundamentalist interpretations, or his teaching that the law—whether Torah or Shariah—is for man rather than man (and woman) for the law, or his words in Lk 17:21, “The kingdom of God is within you,” for Akyol evidence that Jesus transformed the kingdom of God—which Muslims would call the caliphate—from a political kingdom into a spiritual one. Christians will be introduced to a more irenic vision of Islam, one that has come to terms with modernity. The fact that the sacred texts of Judaism, Christianity and Islam have far more in common than is generally known should lead to greater mutual respect and to the reconciliation so needed today.

This article also appeared in print, under the headline “A Muslim journalist sets out to investigate Jesus Christ,” in the March 20, 2017, issue.