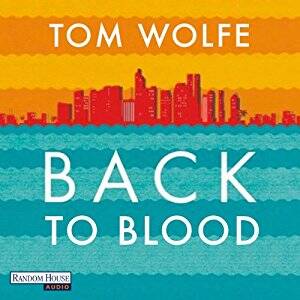 Back To Bloodby Tom Wolfe

Tom Wolfe’s new novel, Back to Blood, has been described as a Miami novel, or a novel about immigration, but in some ways it seems like a capstone to all of Wolfe’s career. It is not his best work—that is still to be found in his nonfiction—but it is a tighter and more effective work than his most recent fiction. The setting is new, but Wolfe’s interests are constant. Some, like the suspicion that modern art is just a fraud, may seem like mere hobbyhorses by now. Other issues, however, remain as fresh as ever. More than any other writer, Wolfe takes the view that no matter how much they deny it, most people are locked in a competition for status.

The markers of status may be trivial and worthy only of satire, but the struggle is real and deadly serious. Status is so important because Wolfe questions the idea that has become central to the American understanding of the self, which is individuality. American literature, mass culture and psychology in its popular forms all extoll the individual, who finds or creates his own identity, and either has no need for society or positively rejects its intrusions on him.

In Wolfe’s view, however, identity is always formed by society. The free spirit of the 1960s counter-culture can play that role only with the support of the others “on the bus.” The heroes of the space program developed “the right stuff” only because they were formed by a culture that made calmly joking while lying atop an eight-story pile of explosives seem natural. When he began writing fiction, Wolfe began grappling with the question: if identity is social, what happens to a person who loses his society?

The central figures of all Wolfe’s novels face losing the social network that has created their identities and must find a new way, quite literally, to be. That is the predicament of Nestor Chamacho and Magdalena Otero, the young Cuban-American protagonists of Back to Blood. Nestor is happy in two social networks: the close-knit, middle-class Cuban community of Hialeah and the Miami police force. Then what might be seen as acts of duty and prowess endanger his positions in both worlds. First the Cuban community sees him as disloyal, and even his family shuns him. Then an incident that inflames the black community results in a suspension from the force, and Nestor becomes desperate. Magadalena willingingly leaves the world of Hialeah, first by dumping Nestor. But she finds it hard to find a new identity, since the worlds of money (new and old), art and style see her only as a beautiful accessory, not as a potential member.

His Victorian models might have invoked providence, but God is not among Wolfe’s large cast of characters. From the days when Wolfe was describing the drug culture of the 1960’s as a spiritual movement andcalling the Me Decade the Third Great Awakening, he has had a keen eye for the religious element in American culture. He now sees only its absence.

Perhaps that is because Wolfe’s research has been incomplete. In I Am Charlotte Simmons, the central character has a strong religious background, but seems stuck at the “Now I Lay Me Down to Sleep…God Bless Mommy” level in her relationship with God. On a real campus, she would have found a Christian fellowship, which would have given her both spiritual support and a social network. In Miami, Wolfe seems not to have noticed any religious life beyond a few Santeria trappings. Instead, we begin the novel in the mind of a representative of the part of our culture from which religion has most thoroughly evaporated—the dying WASP ascendancy—and in the other characters we see only the scantest vestiges of belief that might make sense of the world.

What makes sense of the world when religion disappears? Wolfe’s answer, in its most simple form, seems to be manliness. In A Man in Full, manliness was fused with religious stoicism, and some of that language appears in Back to Blood as well. It remains, however, an idealized version of masculinity. The characters that Wolfe most admires—and he seems not to have a deep affection for any of his creations—are those men who stick to a code of prowess and honor even when society abandons them. Hector is able to do that, being at his best a cop first and everything else second. He is most truly himself when he takes on the manly role of protector of the weak.

This view of human personality explains why Wolfe’s portraits of women are at best problematic. Even though Magdalena at one point invokes the manly ideal of “honor,” she is in fact always defined by her relationship with one man or another. The social world that defines most women in Wolfe’s work boils down to one man, and they find no code to cling to beyond it. I Am Charlotte Simmons is in the end such a sad book because the character who announces her own identify in the title ends the book knowing who she really is: “JoJo Johanssen’s girlfriend.”

While one may wish that Wolfe would try to describe women who find the same sort of integrity that a few of his male characters achieve—one may also wish that his research had included as many megachurches and Cuban parishes as strip joints and art shows—Wolfe remains one of the writers by which our times will deserve to be remembered.

This article also appeared in print, under the headline “Community Disorganizing,” in the February 25, 2013, issue.