The Depths of Connection

A book review is meant to give a rough outline of the structure and content of a work, some assessment of its merits and a recommendation to those who would most benefit by reading the book. Yet as I engage Meeting Mystery, and Nathan Mitchell’s exquisite invitation into the realm of Christian worship, I sense that the nature of a review itself must be reimagined, just as Mitchell suggests that ritual worship be reimagined. An outline of its structure and content will tell you something about the book, but it will not tell you what the book may reveal about you. “Assessment of its merits” makes it sound like a scholarly observer reflecting more on his/her own personal observations, rather than issuing a plea to let the poetic wonder of the book bring you into the wonder and majesty of the Holy One. And as for those who would benefit by it, how about anyone whose imagination suspects that there is always something more, and that Christian ritual, properly approached, can unveil it to you.

I love to tell the story about the blessing of throats on the feast of St. Blaise. I sit in the pew listing at least 10 reasons why it made no sense to get my throat blessed. Yet I rehearse the last five as I stand on line moving to the place of the Holy One to have my throat blessed. This book is not about the reasons for or against having one’s throat blessed. It is about the summons toward the Holy One, which draws one forward. In the Prologue Mitchell speaks a liturgical theology that “begins not with historical reconstruction or even with our ‘experience of worship’s symbols, rites, and texts,’ but with the sober recognition that we don’t know what we are doing.” Liturgical ritual, even the blessing of throats, is not something that follows what we think about our faith. Liturgical ritual expresses our faith. Liturgical ritual does not even give meaning to our faith. Liturgical ritual leads us to a place of meeting, where the mystery of God, ourselves and the world around us becomes incarnate once again.

To concede first to a non-reimagined review, let me offer the levels of passage through which Mitchell invites us. There are two parts to the journey. First is wonder about the role of ritual in human and Christian life. The second concerns the languages of liturgy.

Mitchell speaks of four aspects of ritual: poetically, its roots, its roles and risks, its rules, and its realm. In presenting “ritual’s roots,” he looks for a postmodern image that captures what we do ritually. The modern project—form follows function—is captured by the image of a tree. In contrast, a postmodern image is more like crabgrass. Liturgy engulfs you. You breathe its resonances. Liturgy never stops. It always sends you forth.

In speaking of “ritual’s roles and risks,” Mitchell holds up the contrast between “meaning” and “meeting.” The aim of ritual activity is to take you deeply into the world around you to the point where the One who is its source is met. Along the path, for the Christian at least, is the language of the incarnate God, the language that takes you into human suffering and death and beyond them to the realm of God’s glory. “Ritual’s rules” also marks a reimagination. So often liturgical scholarship inflates liturgical symbols and rituals as if to make God great because we treat God as great. Mitchell hints rather at how ordinary Jesus was, and how he spoke of a God who unveiled God-self within the mundane and ordinary. He uses an intriguing phrase, “the rituals of a God who doesn’t act like one.”

Finally, in speaking of “ritual’s realm,” Mitchell insists that ritual helps us reimagine the world. Ritual presents God’s view of things, which usually is quite different from our own. The task of ritual is to allow movement through it to reshape our own imaginations so that the Word of God spoken by God becomes a word of God spoken through us.

In the second part of Meeting Mystery, on the languages of liturgy, Mitchell offers his view that the human body is the most basic language the liturgy speaks. Language, he reminds us, is never simply verbal speech. It is rather “the more basic patterns of communication by which we humans share emotions, thoughts, ideas, plans, and dreams.” The chapter is a remarkable tour of the emergence of the body into the realm of worship, toward a transfiguration of itself and of the world. Then he explores the “logic of metaphor” as the human being enters the world of worship and engages the realm of God’s glory. Liturgy speaks and draws us into itself and, in so doing, into the meeting with the Holy One. Finally, in a chapter on “parts and participation,” Mitchell speaks of the manifold nature of the assembly that God calls and how liturgy invites the church and the world to be transformed.

If I were to do an ordinary review of Mitchell’s book, I would describe it as an imaginative and thrilling tour of liturgical worship that brings us through the prayers, symbols and texts of our prayer to the God who speaks to us and shapes us as we pray. If instead I reimagine the review, I must tell the reader what the book has done for me. My hope is that you might discover for yourselves what it can do for you. In the realm of ritual worship, it has slowly taken me beyond words, symbols and gestures to the mystery that is its depth. It has slowly awakened in me an ongoing sense of the unending nature of worship and the need to touch things beyond ritual. It has slowly made sense of how the eucharistic prayer engages me and why it sends me outward to the homeless, the disenfranchised and the unfed. Those are some things that have happened to me. I offer them as a promise of what this book may bring to you.

This article also appeared in print, under the headline “The Depths of Connection,” in the May 21, 2007, issue. 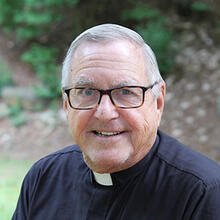