Instead of building walls, the U.S. should revisit good neighborism. 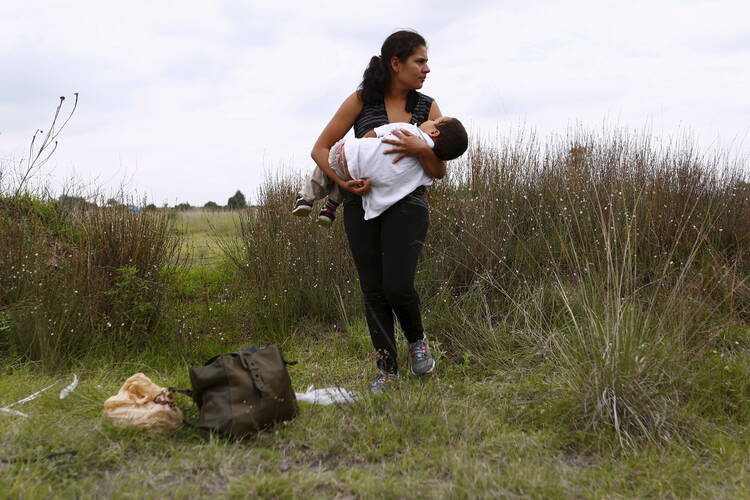 A Salvadoran immigrant carries her son in a field in Huehuetoca, Mexico, while trying to reach the U.S.-Mexico border in 2015. (CNS photo/Edgard Garrido, Reuters)

The Americas are one landmass. The fates of its states and its people are inseparable. America does not merely stretch from sea to shining sea, but from Cape Horn to the northern ice caps. The United States is not a nationalist island but one republic among others that share a vast continent. Indeed, in the first editorial of this magazine, the editors identified the name America with the entire Western Hemisphere.

So-called domestic decisions in the United States on deportation and drug policy and “foreign” political upheaval, corruption or crime generate interconnected and reverberating effects. Turmoil in Central America or Venezuela cannot be perceived as isolated phenomena when migrants and refugees from those countries arrive at the U.S.-Mexico border.

It is time for a new Good Neighbor policy. First deployed by Franklin Delano Roosevelt in the 1930s, the Good Neighbor policy briefly achieved improved relations with many of the states in the Americas. But the aggressive interventionism propelled by the Cold War put an end to all that. The United States became not a good neighbor in the hemisphere but the bullying Tío Sam, bribing, manipulating and occasionally bludgeoning other states of the Americas into submission.

Turmoil in Central America or Venezuela cannot be perceived as isolated phenomena when migrants and refugees from those countries arrive at the U.S.-Mexico border.

Focused on perceived threats and old rivals across the Atlantic and the Pacific, successive presidential administrations have at times ignored or misread both crises and opportunities closer to home in crafting U.S. continental policy. As the chronic needs of its neighbors in Mexico, Honduras, El Salvador, Colombia, Venezuela and elsewhere became acute, the United States has been torn between a desire to intervene and a desire to isolate itself.

As the Hispanic population of the United States grows in size and influence, the connections of culture, economy and family will further bind the peoples of the Americas. Already the frontier of what we could call modern Latin America has moved peacefully far north of the Rio Grande.

Los Angeles and Miami are not merely great U.S. cities, they are the northernmost metropolises of Latin America. That shift has been viewed by some with suspicion and alarm, but what if it could be appreciated instead as a historic opportunity?

The frontier of what we could call modern Latin America has moved peacefully far north of the Rio Grande.

There is a logic and an inevitability to this growing interconnectivity. The United States can resist this continental drift to the detriment of all the Americas or it can nurture and direct that integration in an honest and just dialogue with its neighbors. Creating new opportunities for trade, for example, and rationalizing labor flows across the continent through comprehensive immigration reform would better integrate economies and cultures of the north and south to the benefit of both.

Instead of building physical barriers or backing an authoritarian revival, the United States could revisit good neighborism, supporting economic and social development and offering assistance to combat crime and social chaos throughout the Americas. That program should begin by looking at how its own social failings and policies contribute to the lawlessness.

The United States has the opportunity now to do right by its Latin American neighbors, not just out of obvious self-interest but because in this neighborhood it has the biggest house on the block. Only a few nations have the resources and expertise to lead such a continental revival. And if the United States does not step up like a good neighbor, other global players, notably China, will be tempted to do so.

The concept of Western Hemispheric integration can be alluring. Unfortunately, even among the most far-sighted geopolitical visionaries, strategies tor reach this goal have never been coherently imagined. The Roosevelt vision was both tentative and limited, though potentially constructive. The obstacles that 16th century mercantilism, along with the imperialist strategies pursued to achieve it (including the slave trading thought necessary to make it work), have effectively suppressed the dream from our consciousness. The scarred remnants of this heritage are what can be seen today. Because the Catholic Church, the “established” church for most of the European powers involved in this history, has been so prominent in the region’s past it would require a genuinely heroic effort to take part in making the integration dream come true.