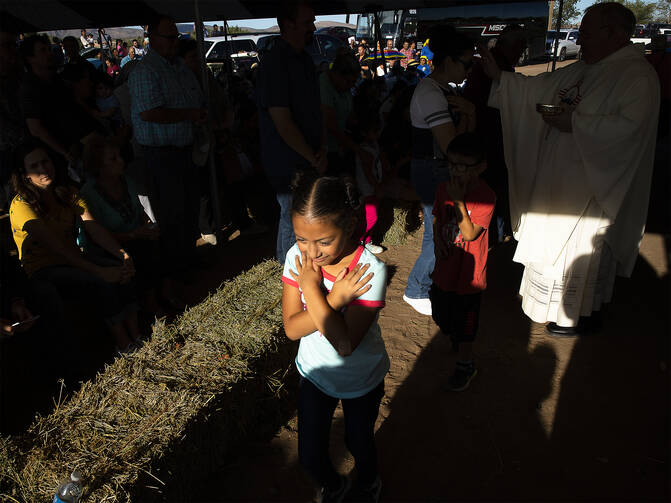 A girl crosses her arms after receiving a blessing during Communion at an outdoor Mass Sept. 26, 2019, in Hatch, N.M., which was part of a pastoral encounter by U.S. bishops with migrants at the border. (CNS photo/Tyler Orsburn)

Catholic organizers, labor leaders, theologians and activists will gather Oct. 11 to Oct. 13 in El Paso, Tex., for a national pilgrimage, teach-in and public action. The gathering, hosted by the Hope Border Institute and the Latinx Catholic Leadership Coalition, comes as government leaders are at loggerheads over immigration reform.

There has been a heightened awareness of ongoing tensions at the U.S.-Mexico border after the massacre in El Paso on Aug. 3, according to Marisa Limón of the Hope Border Institute. I had an inside look at the planning of this event, having served on the communications committee. While border communities can be “open and compassionate” to others, there is a need to do more, she said.

“There are so many things that deny the human dignity of communities of color,” she said. Ms. Limón said the Teach-In 2019: Journey for Justice will increase awareness of push factors involved in immigration and encourage support for more humane policies. While there are high levels of voter registration in El Paso, she said there is work to be done when it comes to voter engagement.

“The issues at the border haven’t been understood as a fundamental moral challenge of what we stand for as a nation.”

Luis Fraga, the president of the Institute for Latino Studies at the University of Notre Dame, will be one of many speakers at the teach-in. In addition to accompanying migrants, he said the gathering will highlight the immorality of the way migrants are treated.

“The issues at the border haven’t been understood as a fundamental moral challenge of what we stand for as a nation,” Mr. Fraga said in an interview with America. He referenced President Trump’s comments about putting a moat on the border with alligators: “Whether it was intended as policy or not, it gives you a sense of the immorality that’s going on.”

While he praised the U.S. Conference of Catholic Bishops for writing on behalf of immigrants, he called for a broader demonstration of solidarity. “There has not been an action by all bishops and archbishops together to say this is wrong,” Mr. Fraga said. Last month, five bishops spent time visiting migrants at the border, but he would like to see all bishops unite with other religious leaders to denounce injustices at the border.

“They haven’t gone down there as a group to say this is a moral issue,” Mr. Fraga said, adding that he hopes the teach-in will forge relationships to bring about change. To an extent, that has already happened with the formation of the Latinx Catholic Leadership Coalition.

Michael Nicolás Okińczyc-Cruz, the executive director of the Coalition for Spiritual and Public Leadership and a lead organizer of the teach-in, explained that the teach-in came together during the third National Symposium on Catholic Hispanic Ministry hosted by Notre Dame in July, which I also attended as a liaison with the Catholic press.

The event is unique in that it centers on “the voices, vision, experiences and spiritualities of Latinx Catholics” who “understand the oppression that our communities are facing.”

“Earlier in the summer and prior to this gathering, reports of the horrifying conditions that children were facing in many of our nation’s detention centers had sparked outrage amongst millions in our country and certainly amongst those of us gathered at Notre Dame,” he said in an email to America. “Many of us were also coming from communities that had experienced the trauma and violence of ICE raids and the repeated threats of impending raids.”

Mr. Okińczyc-Cruz said the event is unique in that it centers on “the voices, vision, experiences and spiritualities of Latinx Catholics” who “understand the oppression that our communities are facing.” He hopes the gathering will build the Latinx Catholic Leadership Coalition and inspire Catholic and interfaith leaders across the country to act.

How is the church serving Latino Catholics?
Our readers

“We want everyone to walk away from this experience believing that through faith, courage and solidarity we can and must make progress in overcoming the profound spiritual and political darkness in our nation that manifests through racism, xenophobia, colonization, hatred and poverty and which has marked our nation’s history,” he said.

“We plan to directly signal to the White House, Department of Homeland Security and political figures across the country that our peoples’ dignity cannot be trampled upon, that refugees and migrants have a fundamental and God-given right to seek safety and opportunity through asylum and that we will not be silent on these matters,” Mr. Okińczyc-Cruz said.

“In taking a stand at the border with our partners at Hope Border Institute and from across the country, our demands are to see an immediate end to the ‘Remain in Mexico’ policy, which is a direct and inhumane assault to our faith teachings, and to recognize and uphold the sacred and internationally recognized legal right to seek asylum.”

Catholic leaders and others boldly standing for migrants and against Trump at the border. Beautiful. Muy bien!

Public money was meant to be spent on care of people entitled to dwell within the homeland of the people who are the source of the money - any other use is theft.