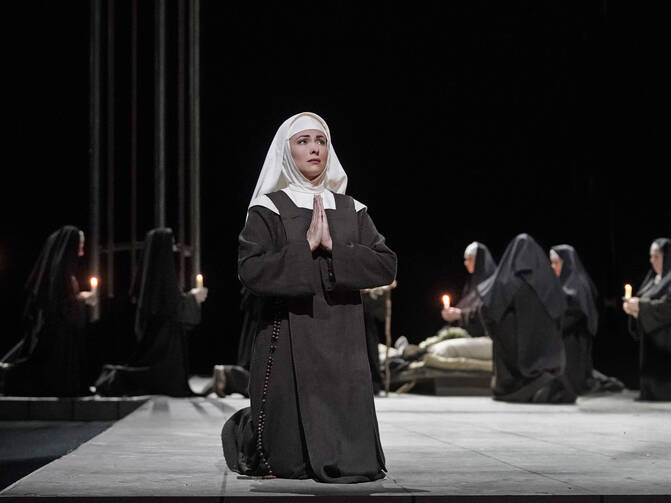 As the French Revolution reached the peak of its violence during Robespierre’s Reign of Terror, one of its greatest horrors was the desecration of the Carmelite Convent in Compiègne, in northeastern France. Sixteen members of the Carmelite community were executed as “counterrevolutionaries.” They were 11 nuns, three lay sisters and two members of the third order. It is said that as the sisters were carted to the guillotine, the surrounding crowd was strangely silent—and that the awful event may indeed have contributed to the end of the Terror.

The story became more widely known when the German writer Gertrude von le Fort, a brilliant student of Ernst Troeltsch and a convert to Catholicism, drew on a memoir by a survivor of the executions to publish a novella, The Song at the Scaffold. She created the character of Blanche de la Force, a young aristocrat haunted by fear, who seeks peace in the convent. The author’s sympathy with her creation is evident in the similarity of their names. She saw in Blanche “the embodiment of the mortal agony of an era going totally to its ruin.”

As the French Revolution reached the peak of its violence, one of its greatest horrors was the desecration of the Carmelite Convent in Compiègne.

In the fraught postwar years, the legendary French Dominican Raymond-Leopold Bruckberger and the cinematographer Phillippe Agostini developed a film based on the novella (adding the character of the Chevalier de la Force, Blanche’s brother). In 1947, they persuaded Georges Bernanos to write the dialogue. Though the film was never realized, the Bernanos text was staged as a play that premiered in Zurich in 1951 and ran for 300 consecutive performances in Paris the following year.

Offered a commission to write a ballet for La Scala and the Milanese publisher Ricordi, the French composer Francis Poulenc (1889-1963) chose instead Bernanos’ “Dialogues of the Carmelites.” He had seen the play performed in Paris and now read it straight through one afternoon, transfixed, in the Piazza Navona in Rome. He had found the great theme of his life: uniting historical event and mystical depth. He began “working like a madman” on it. “I do not go out. I do not see anyone. I do not want to think of anything else,” he wrote in August of 1953. “I am crazy about my subject, to the point of believing that I have actually known these women.” For his libretto he had the profound text of Bernanos’s play, yet the project was imperiled by a dispute over rights to the text. Poulenc then suffered a nervous breakdown, triggered also by the death of his lover, Lucien Roubert, as he was writing the final pages of the opera.

Originally written by Georges Bernanos, the “Dialogues of the Carmelites” was turned into an opera by the French composer Francis Poulenc.

Earlier in his career, Poulenc had been a member of the progressive French group Les Six and something of an enfant terrible. But after the violent death of a friend in 1936 and a visit to the sanctuary of Rocamadour that same year, he turned to a devout faith. The score of “Carmélites” is entirely tonal and draws on a wide range of musical sources—the composer mentions specifically his debts to Mussorgsky, Monteverdi, Debussy and Verdi. In many of the opera’s almost recitative scenes, the “dialogues,” Poulenc reveals his vaunted facility at setting musical lines for the human voice. The effect is “quintessentially French,” in the words of the Metropolitan Opera’s new musical director, Yannick Nézet-Séguin (whose conducting was like music itself). There are almost no arias—but tender evocations of mood (the tremulous accompaniment to Blanche’s first appearance), grand declamatory scenes (for the Second Prioress) and sublime settings of some of Catholicism’s best known hymns and prayers, the Hail Mary and Ave Verum.

Returning to the Met for the first time since 2013, again with John Dexter’s powerful staging from 1977, with its central, raked cross that can be either revealed or concealed by lighting, the opera is in three acts, with four scenes in each. (The opera is presented by the Met with only one intermission, blurring the effect of the “final scene” in each act.) It opens silently with prostrate nuns lying on the illuminated cross and moves then to the library of the Marquis de la Force in Paris, where we learn of his anxious daughter’s resolve to enter the Carmel in Compiègne. (The role is sung by the radiant mezzo-soprano Isabel Leonard, who looks in her Carmelite habit like an Antonello painting).

The score of “Carmélites” is entirely tonal and draws on a wide range of musical sources.

In the first scene at the Carmel Blanche, asking to take the name Sister Blanche of the Agony of Christ, is sharply reproved by the aging and infirm prioress (Madame de Croissy, the dramatically extraordinary Karita Mattila), that the Carmel is not a theater of heroism but a place of prayer. In the convent workroom, Blanche meets the young, guileless but deeply perceptive Sister Constance (sung like an angel by Erin Morley), who startles her by saying that they will both die young and on the same day.

The act’s final scene, in the infirmary, is harrowing. Madame de Croissy is in agony both physical and spiritual. Mother Marie—the imposing, mellifluous Karen Cargill—urges her to turn her thoughts to God. Madame de Croissy replies, “God has become a shadow.” Counseled by her kind daughter to consider God, the Prioress fairly barks, “Why should I consider God? He should consider me.” Her final humiliation is to be seen in such ultimate distress by Blanche, whom she has called to her bedside. And then the moment of death itself comes violently. I have heard the part sung by Régine Crespin and Dame Felicity Palmer—but never to such terrifying effect.

The act’s final scene, in the infirmary, is harrowing. Madame de Croissy is in agony both physical and spiritual.

In her death throes Madame de Croissy has a vision of the destruction of the Carmel, and the next two acts move solemnly, inexorably toward that horror. As the nuns mourn her, Constance suggests to Blanche that “we do not die for ourselves alone, but we die for each other, or probably even instead of each other. Who knows?” Madame Lidoine (the soprano Adrianne Pieczonka in a thoroughly authoritative performance) is appointed the new prioress. Blanche’s brother visits the Carmel but fails to convince Blanche to flee with him from the mounting hysteria in the country.

In Act III, with Madame Lidoine absent, Mother Marie suggests to her sisters that they take a vow of martyrdom for the sake of France, and, even though the vote for the vow fails, Blanche abandons the convent. Madame Lidoine returns, and with the nuns arrested and sent to the Conciergerie prison, joins them in the vow of martyrdom. In the city Mother Marie longs to join them as well but is advised by their chaplain, now in hiding, that it is God who decides who will be a martyr.

The final scene, in the Place de la Révolution, heightens almost unbearably the simple grandeur of the whole opera. To insistent processional music, the nuns are gathered at the front of stage left and then slowly begin their walk, one by one, past the silent crowd, up the long bar of the cross, between two soldiers and into the backstage darkness where terrible thuds sound the fall of the guillotine and the death of each of them. Poulenc has given them a sublime setting of the Salve Regina to sing. When Sister Constance begins her walk as the youngest and last, she suddenly hears the voice of Blanche, returning to join her fellow martyrs. The two young women embrace. Constance disappears into the darkness, and so then does Blanche, singing the doxology from the Veni, Creator Spiritus.

The stage goes immediately black, the opera ends, and you don’t know what to do. Fall to your knees? Applaud? Leave as silently as at the end of a Good Friday Liturgy? One thing surely: entreat the Met to bring this epochal work back sooner than it has in the past.

Never a more powerful rendition of the Veni Creator have I experienced:
For a comparison of the Bernanos and Poulenc texts, cf. page 79 here:
https://digital.library.unt.edu/ark:/67531/metadc103288/m2/1/high_res_d/dissertation.pdf