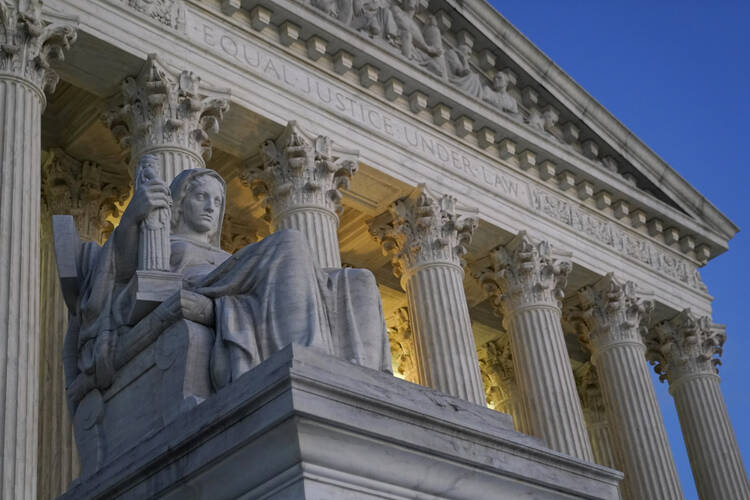 (OSV News) -- The U.S. Supreme Court revealed Jan. 19 that after a monthslong investigation by its marshal, it has yet to identify who leaked the draft of the high court’s decision in Dobbs v. Jackson Women’s Health Organization. The June 2022 opinion ultimately overturned the court’s previous abortion-related precedents in Roe v. Wade and Planned Parenthood v. Casey.

The leak of an earlier draft of Justice Samuel Alito’s opinion in the Dobbs case, published by Politico in May 2022, caused a public firestorm before the court issued its official ruling in June. The leak is seen as the most significant breach of the court’s confidentiality in its history.

A statement by the high court said an investigation has so far been “unable to identify a person responsible by a preponderance of the evidence.”

The statement went on to call the leak “one of the worst breaches of trust in its history.”

“The leak was no mere misguided attempt at protest,” the statement said. “It was a grave assault on the judicial process.”

The statement said that the high court has public arguments and documentation, but that its deliberations should be confidential, saying “it is essential that we deliberate with one another candidly and in confidence.”

“No one confessed to publicly disclosing the document and none of the available forensic and other evidence provided a basis for identifying any individual as the source of the document,” the report said.

A report by Supreme Court Marshal Gail Curley detailing the investigation said that at this stage, “it is not possible to determine the identity of any individual who may have disclosed the document or how the draft opinion ended up with Politico.”

“No one confessed to publicly disclosing the document and none of the available forensic and other evidence provided a basis for identifying any individual as the source of the document,” the report said. “While investigators and the Court’s IT experts cannot absolutely rule out a hack, the evidence to date reveals no suggestion of improper outside access.”

Curley’s report added, “Investigators also cannot eliminate the possibility that the draft opinion was inadvertently or negligently disclosed -- for example, by being left in a public space either inside or outside the building.”

The report said that if the draft was leaked intentionally by someone employed by the court, that “gaps in security or policies” have allowed them to go thus far undetected. It made recommendations about “vulnerabilities that should be addressed,” such as reducing the number of people with access to such documents.

The report said investigators determined that 80 personnel “received or had access to electronic copies of the draft opinion,” and that they conducted 126 formal interviews of 97 personnel as well as forensic reviews of their phone and electronic records.

“Very few of the individuals interviewed were willing to speculate on how the disclosure could have occurred or who might have been involved,” it said.

Those personnel interviews, the report said, “provided very few leads concerning who may have publicly disclosed the document.”

“Very few of the individuals interviewed were willing to speculate on how the disclosure could have occurred or who might have been involved,” it said.

The report noted that some individuals admitted to telling a spouse or partner about the opinion “in violation of the Court’s confidentiality rules.”

After the leak, Chief Justice John Roberts confirmed the authenticity of the document and said the court would fully investigate the leak, authorizing the marshal of the Supreme Court and her staff to do so.

The court said it consulted former DHS Secretary Michael Chertoff to assess the marshal’s investigation. Chertoff called the investigation “thorough” in a statement, adding that “while there is not sufficient evidence at present for prosecution or other legal action, there were important insights gleaned from the investigation that can be acted upon to avoid future incidents.”

Kate Scanlon- OSV News
Show Comments ()
Join the conversation: Login or create an account
Before you can comment, you need to update your profile to include your first and last name, as required in our comments policy. Then reload this page and you'll be set up for commenting. Update your profile