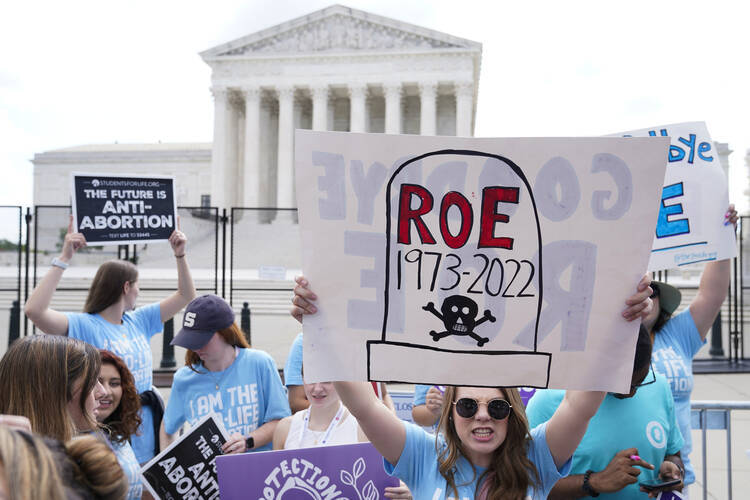 Five decades after the U.S. Supreme Court legalized abortion, the neuralgic issue remains at the forefront of politics both national and local, with religious groups (including the Catholic Church) playing an important role in ongoing debates about how and when and if abortion should be legal. The court’s reversal of Roe in June 2022 with Dobbs v. Jackson confirmed the reality that the issue will continue to be prominent in our political, legal and religious landscapes.

What did the editors of America have to say on the issue of legal abortion at the time of Roe v. Wade? A look back through America’s archives reveals varied responses depending on the politics of the day, the composition of the editorial board, the prevailing climate in the Catholic Church in terms of what moral issues were given priority, and the prudential judgments of the editors themselves. Opposition to abortion on the grounds that it was the taking of innocent human life was a consistent point of every editorial on the subject, but how that opposition was parsed out in legal terms (and how legal issues were related to moral claims) was another question.

Here is how the editors responded in the immediate aftermath of Roe v. Wade in 1973.

While America’s pages have always offered commentary from a broad range of contributors, it is worth noting that with few exceptions, the editors were only Jesuits for much of the magazine’s history, and it was not until 1999 that a woman served on the editorial board. For most of its history, the magazine has been run by priests and professors; only more recently, for the second half of Roe’s nearly 50 years, were lay people and parents also around the table at editorial meetings.

Here is how the editors responded in the immediate aftermath of Roe v. Wade in 1973.

In the weeks after Roe became the law of the land on Jan. 22, 1973, America’s editorials showed a rather matter-of-fact response. A short editorial in the issue of Feb. 3 said the editors were “dismayed, respectful and determined” in the aftermath of a ruling that meant “unborn children now enjoy no legal protection against their mothers for the greater part of their lives in the womb.” They called the decision “long on history but short on science,” but said, “[n]evertheless, we respect the court’s decision, first, because the decision had to be made, second, because the court had to make it, and finally, because the court faced its task honestly.” The editors vowed to “remain determined to do everything we can to protect the lives of the unborn” and “continue our efforts to call attention to solutions for personal, social and economic problems that motivate many abortions.”

Another short editorial on Feb. 10 noted the danger of “a degree of social coercion” for women to have abortions now that it was legal nationwide and noted that “the Roman Catholic Church in the United States faces a number of decisions concerning the alternatives now possible in terms of legislative action.” They also emphasized the distinction between the Catholic Church’s opposition to abortion and the need for a pastoral response to those making the choice to have one: “The Church must give serious consideration to the difference between its perennial teaching function in this manner and the growing need for services, primarily in the area of counseling, that the new situation calls for.”

Charles Whelan, S.J., an accomplished legal scholar who had actually argued a case before the Supreme Court himself just a year earlier, was an associate editor of America at the time, and he wrote an “Of Many Things” column on Roe for that Feb. 10 issue. “This is the law of the land. It will continue to be so, at least for the next few years and possibly for a very long time,” he noted. His advice for America’s readers was straightforward: Opponents of legal abortion should seek to establish “conscience clauses” for health care workers who did not wish to perform them; advocacy and legislative work should be done at the state level to pass laws to prevent abortion-on-demand from becoming a reality; and “a long-term effort to change the law announced by the Supreme Court” should be undertaken, either by constitutional amendment or through further litigation before the court.

The context in the nation

A reader may note a certain muted tone to all three responses, and in fact the editors only rarely returned to the issue for the rest of 1973. Certainly, coverage of abortion as an issue was far more limited editorially immediately after the decision than in the decades since. Why?

First, probably no one in 1973 thought that Roe would result in more than a million abortions a year, a number far exceeding that of European countries with liberalized abortion laws (even today, the abortion rate in the United States dwarfs that of other Western nations). With the exception of California, where abortions skyrocketed after Gov. Ronald Reagan signed the Therapeutic Abortion Act in 1967, most U.S. states that legally allowed abortion before Roe had not seen huge increases in the abortion rate. That would change rapidly in the years following.

Certainly, coverage of abortion as an issue was far more limited editorially immediately after the decision than in the decades since. Why?

Second, the decision came at a time of incredible political tumult around other issues in the United States. January 1973, it turns out, was a month for the ages. Former president Lyndon B. Johnson actually died on the day Roe was announced, Jan. 22, 1973; Richard Nixon’s second inauguration was held two days later, on Jan. 24. The war in Vietnam—which had doomed Mr. Johnson’s political career and was proving a vexing issue for President Nixon as well—was still going full-tilt (and poorly) in its final years. And the first trial in the “long national nightmare” of Watergate had begun on Jan. 10, with suggestions of Mr. Nixon’s involvement already in the press.

The context in the church

The Catholic Church in the United States also faced many other issues that may have seemed more pressing than abortion and which received far greater coverage in America’s editorials at the time. Eight years after the close of the Second Vatican Council, five years after the promulgation of Pope Paul VI’s “Humanae Vitae” encyclical and in the midst of rapidly changing social mores, American Catholics had many other issues to discuss—among them a church that seemed itself to be changing dramatically every day.

For example, a widespread exodus from religious life and the diocesan priesthood that had begun in the second half of the 1960s was still ongoing in 1973; at the same time, vocations to the priesthood and religious life had plummeted. In addition to the loss of personnel, these phenomena had also caused a crisis of confidence around the viability of many church structures taken for granted. Religious habits were vanishing in most places as well, and formerly semi-cloistered communities of religious were adopting new ways of life.

The Catholic Church in the United States faced many other issues that may have seemed more pressing than abortion and which received far greater coverage in America’s editorials at the time.

Along with a soaring divorce rate, Catholics had also began applying for (and receiving) annulments by the tens of thousands, just a decade removed from a time when annulments nationwide did not break 500. Sweeping changes in social conventions around premarital sex, cohabitation and contraception combined with those realities to alter the definition of typical family life for many Catholics. The widespread dissent (public and private) from “Humanae Vitae” alone was a marker of how dramatically Catholic life was changing.

Many of the other externals of Catholic life seemed up for grabs in 1973. Mass was now in the vernacular; weekly confession was becoming a thing of the past; Catholics were attending secular schools and universities in increasing numbers, and the Catholic laity was for the first time becoming better educated than the priests and men and women religious who had long taught them.

America’s editorial stances in 1973 reflected both the optimism and the confusion and discombobulation of the time. The editors that year were not able to predict how deeply divisive abortion and the various attempts to resolve the question at the Supreme Court would become in the decades to follow. Their opposition to legal abortion was a given, as was advocacy for legislative efforts to restrict it and offer necessary support to avoid the need for abortion—a stance no different from that of America today. But in a church and a world so different from today, the hope for discussion of the issue to generate more light than heat seemed more attainable than it has in recent years.

While a comprehensive account of America’s editorials regarding abortion since Roe v. Wade was decided would run to book length, a sample of several over the years helps to illustrate both the changing political and legal environment around abortion and the consistent issues of protection for unborn life and social safety net support for pregnant women and for children. The editorials also consistently engage with the constitutional challenges of the Supreme Court’s rulings on abortion.

1980: Responding to the court decision upholding the Hyde Amendment’s prohibition on federal funding for abortions

1984: Recommending Cardinal Bernardin’s approach for the “​​creation of a moral consensus on the value of human life at all stages of its existence”

1990: Discussing “Abortion, Rhetoric, and Political Justice” with regard to Catholic politicians and church teaching on abortion

1992: Anticipating and responding to the Supreme Court’s decision in Casey v. Planned Parenthood

2007: Criticizing Amnesty International’s support for abortion as a human right

2012: Advocating for pro-life initiatives in addition to opposition to abortion

2019: Explaining how Roe v. Wade has made abortion politics impossible

2022: Responding to the Dobbs decision that overturned Roe v. Wade