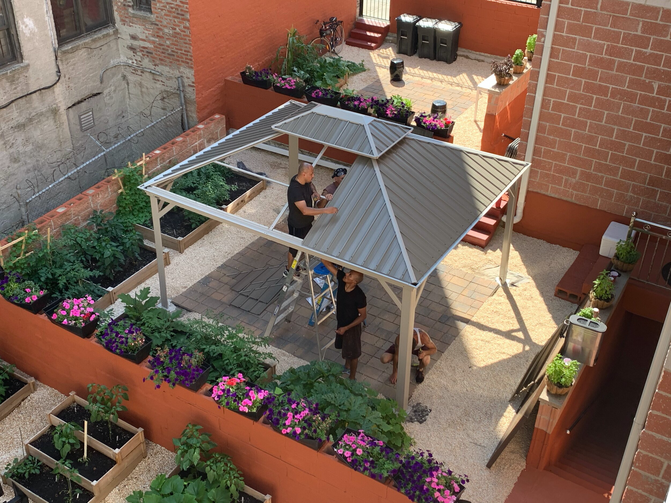 Resident scholars at the Ignacio House in the Bronx, N.Y., work on a rooftop garden in the summer of 2020. Photo courtesy of Thrive for Life.

New York City’s Department of Parks and Recreation officially renamed a Harlem entrance to Central Park on 110th Street on Dec. 19. The entrance’s low stone wall bears its new name: the Gate of the Exonerated, dedicated to the five teenagers—dubbed “the Central Park Five” by the media at the time—who were unjustly convicted in a high-profile 1989 attack on a female jogger. The new name represents a renewed commitment to recognizing and mending harm done by the criminal justice system.

At a nearby Harlem building that day, another kind of restorative dedication was taking place—this one did not draw an audience. A young man named Zach was finishing his move into the new Ignacio House, a community home for formerly incarcerated men pursuing degrees in higher education.

Since 2019, Ignacio House has housed 15 “resident scholars” who study at N.Y. colleges and universities at a site in the Bronx. Last month, the community received permission from the Archdiocese of New York to move into its new home at the site of a one-time residence of the Edmund Rice Christian Brothers in Manhattan.

Last month, the community received permission from the Archdiocese of New York to move into its new home at the site of a one-time residence of the Edmund Rice Christian Brothers in Manhattan.

The new location will do double duty—a living space for the program’s resident scholars like Zach, who asked to be identified by his first name only, and the offices of Ignacio House’s parent organization, Thrive For Life Prison Project, Inc. The relocation is the first step in a nationwide expansion for Thrive For Life which will include new communities opening in Wisconsin, Louisiana and Washington, D.C.

Another Zach, Zachariah Presutti, S.J., founded Thrive For Life in 2017 after spending years working behind the walls of jails and prisons. Father Presutti, a licensed social worker and a priest who has served as a prison psychotherapist, said that offering education opportunities and establishing housing security are crucial components for a successful recovery after incarceration.

“If you're not traumatized before you go into prison, you certainly are by the time you come out,” he said. People returning to society from incarceration, he explained, will have to tap into a number of “tools and resources wherever they are in their mental health development,” but first “it's really necessary to have…successful reentry.”

Also necessary is a supportive environment, something the new Ignacio House in Harlem, originally built for a community of Christian Brothers, is designed to offer with welcoming communal spaces and bigger rooms for its residents.

The new location is also convenient for Zach, who commutes to class at Columbia University nearby. Many of the house’s residents attend other Manhattan colleges, like New York University and Hunter College, that host special degree programs for the currently and formerly incarcerated.

In prison, Zach had studied mathematics, but pivoted after his release to pursue a career in law. He said that he wanted to work more directly to help other people.

Zach, a Pennsylvania native, first applied for the Columbia program without knowing where in New York he might live. After earning his associate’s degree in paralegal studies, he decided to continue toward a bachelor’s in legal philosophy. Now he is thinking about attending law school.

In prison, Zach had studied mathematics, but pivoted after his release to pursue a career in law. He said that he wanted to work more directly to help other people, especially those who have also been incarcerated, “the way I was helped.”

Zach’s journey to Ignacio House began after his acceptance to Columbia. Scouring the internet for suitable lodging, he stumbled on some information about Ignacio House.

That find allowed him to avoid the frustration of apartment hunting in New York with a criminal record, a well-known obstacle to housing. One formerly incarcerated New York woman named Kandra Clark spent five years after her release—and despite her full-time job—sleeping on friends’ couches and being routinely rejected by landlords, according to a report in The New York Times.

The problem has prompted action from local politicians and advocacy groups. Earlier this year, New York City Council Majority Leader Keith Powers introduced the Fair Chance for Housing Act, an effort to prohibit landlords from discriminating based on tenant-applicants’ criminal records. Previous attempts to approve that municipal code in New York have failed, but similar prohibitions have passed in New Jersey and California.

For someone like Zach, who lived with family in Pennsylvania after his release in 2019 while pursuing his associate’s degree, the move to New York to attend Columbia might have proved impossible without Ignacio House.

Zach is an anomaly at Ignacio House: Typically, the community’s resident scholars connect with Thrive For Life while still behind prison walls. The agency regularly hosts retreats inside several New York prisons, including Rikers Island and Taconic Correctional Facility, and distributes monthly newsletters. The nonprofit also works directly with prison educators who want to give formerly incarcerated students the best possible chance of success after release.

“A lot of times they continue their education with the same institution that's offering them education behind the walls,” Father Presutti said. “That lends itself to the need for housing, so we're [trying to stop] people from being released into the shelter system or surfing between friends and family.”

The Harlem Ignacio House will include many of the same amenities as its former location—a library stocked with donated books, a community workout room and private bedrooms for each of 15 residents. Father Presutti said that in his experience, it takes a residency of that size to create both a sense of belonging to a community and sufficient capacity to allow individual attention, the Ignatian notion of care of the person that he called a “hallmark of Jesuit education.”

Only six years after its founding, Thrive For Life is solidifying plans for expansion across the country. The nonprofit has purchased a location for a second Ignacio House in Milwaukee, Wis., which should open this summer. A site for a New York residence for women has also been secured in Queens. And discussions are underway to partner with Georgetown University in Washington and Loyola University in New Orleans to bring Ignacio Houses to those cities.

Zach just completed his first semester at Columbia and reports that adjusting to the big city has been a challenge. But living at Ignacio House has helped ease the transition. Instead of being completely alone when he finishes with class, he returns to a home each day and a community of fellow students. Zach said he is hopeful that the new house in Harlem will foster and deepen that sense of community.