Interview: Why Cardinal Gregory became an advocate for Catholic-Jewish dialogue—and wants young Catholics to get involved 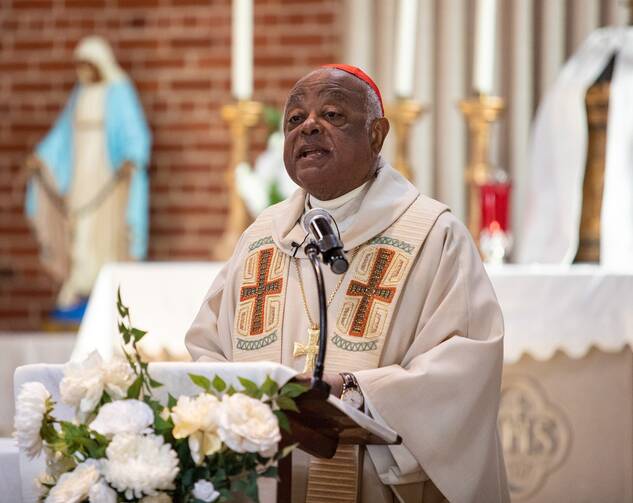 Cardinal Wilton Gregory, the archbishop of Washington, serves as the Catholic co-chair of the National Council of Synagogues consultation for the U.S. Conference of Catholic Bishops and is a previous chair of the bishops committee for interreligious dialogue. In the wake of several incidents of high-profile individuals making antisemitic behavior, America’s national correspondent Michael J. O’Loughlin interviewed Cardinal Gregory for a report on Catholic-Jewish dialogue. The interview was held on Dec. 8, the day after Cardinal Gregory’s 75th anniversary birthday. The transcript below has been edited for length and clarity.

Michael J. O’Loughlin: With recent incidents of antisemitism in the news, and given your background in Catholic-Jewish dialogue, what should Catholics do? How should they respond when they encounter these kinds of stories?

Cardinal Wilton Gregory: First of all, I think Catholics should be properly informed. That is, we should get the facts straight. And we should acknowledge the damage that those kinds of attacks on individuals, or on Jewish institutions, do to the lives of people, including our neighbors, our friends and our colleagues. It’s important that we Catholics stay on top of what’s happening and witness the destructive forces that seem constantly to be erupting in many—too many—places in our nation.

MJO:I’m curious if you think Catholic political leaders have a certain obligation to call out these kinds of antisemitic comments.

WG: Without a doubt. They have been elected or appointed to represent the broader community, of course, but they also are Catholics themselves. And they, too, should be outraged and embarrassed and concerned, in their position as leaders, and as Catholics in the public arena.

It’s important that we Catholics stay on top of what’s happening and witness the destructive forces that seem constantly to be erupting in many—too many—places in our nation.

MJO:I’ve had a chance to interview some Catholic and Jewish leaders who have been involved in these interfaith dialogues for many years, and they told me that there seems to be, especially among younger Catholics who certainly don’t remember a time before Vatican II, a lack of interest in Catholic-Jewish dialogue. Younger Catholics sometimes see tension between Catholics and Jews as something that has been solved—and now we’ve moved on to other issues. Have you encountered that attitude, and if you have, do you have ideas on how to change it?

WG: I think it’s a perception that touches the lives of a lot of young people. The farther away we get from a terrible moment in history, there are fewer people who have firsthand knowledge of it.

When I met [recently] with our Jewish partners in this interfaith dialogue, one of the rabbis raised that point specifically. He said we’ve had documentation before. We’re almost at the 60th anniversary of the issuance of “Nostra Aetate”; why must we do these things all over again or refocus ourselves?

And I think in spite of the fact that it is disheartening to think that we have to go back to the first base, we have to realize that many of the adults, most especially the young adults, have no firsthand knowledge of what prompted the need for the issuance of “Nostra Aetate.”

We have to realize that many of the adults, most especially the young adults, have no firsthand knowledge of what prompted the need for the issuance of “Nostra Aetate.”

In our dialogues, as I’ve experienced them, both Catholic and Jewish participants acknowledge that too many of our young people don’t have a proper appreciation, knowledge or investment with their religious roots. And it’s not just young Jewish people, it’s also young Catholics. We don’t know our own history. We have to continually reintroduce the reasons why these documents and dialogues were established, why they had to be published and why they have to be reread and reconfirmed in almost every decade and in every generation.

WG: We won’t be able to get beyond our history, we won’t be able to get about the job of healing, of reconciliation, if we don’t recognize the causes that drove us apart. The reasons why we have to judge our words, the reasons why documents such as “Nostra Aetate,” and many other documents coming from both the Jewish as as well as the Catholic communities, calling for a deeper awareness, a deeper appreciation and a renewed respect and affection for one another. If you don’t know what caused the problem, you won’t know why the solutions have to be issued.

MJO: I listened to a talk you gave to the Jewish Theological Seminary earlier this year, and you had mentioned that there’s many of these documents in existence, but you also questioned, are they being taught? Are people reading them? How do you think these documents could be better used? What are some ideas you have for how you can get word out about these existing documents?

WG: Again, going back to our most recent Jewish-Catholic dialogue, of only [about] 10 days ago, we agreed, Jewish partners as well as Catholic partners, that we really need to go to the institutions that prepare leaders, both from the Jewish as well as the Catholic perspectives, and begin there. Whether it be in Jewish theological schools, in seminaries, in religious houses, we’ve got to prepare our young, future leaders to speak forthrightly, carefully, accurately and compassionately about the causes of violence, antisemitism and racism. If our leaders, and they will be leaders, are not prepared, the problems [we face] won’t have a solution that is worthy of the people that we represent.

MJO:Could tell me what drew you into this movement, into Jewish-Catholic dialogue? You’ve been involved for a number of years now. What initially sparked your interest?

WG: I grew up in Chicago, and Chicago has a very vibrant and important Jewish community. When I became an auxiliary bishop [there], I was introduced to a number of Jewish leaders in the Chicago area. But, specifically the dialogue that I became engaged with came at the invitation of William Cardinal Keeler, who, in an earlier generation, was a key figure in the Jewish-Catholic dialogue. He invited me to become a member of that dialogue community. Then eventually, I was asked by the conference, to be the Catholic co-chair, and now a second time, to take up that responsibility. It goes back to my growing up in Chicago and learning the importance and the significance of the Jewish community in that local city, [and then] the invitation from Cardinal Keeler to become involved.

To be perfectly honest, it’s been one of the most satisfying experiences that I’ve had. Some of my rabbi friends have become dear friends.

MJO: What is the message you think Catholics need to know about antisemitism, anti-Judaism and how should they view that phenomenon through their lens of faith. Many people active in interfaith dialogue cite personal friendships and relationships, through dialogue, but not every Catholic is going to have the chance to experience something like that. If you were to take some lessons you’ve learned over the years from these dialogues, what would you want Catholics to know?

WG: So much of our Catholic prayer tradition is directly related to our Jewish brothers and sisters. The way that we view Scriptures, the way that we pray, the language that we use in our worship has deep and important Jewish roots.

Whether it be directed towards people of color, immigrants, Jews, Muslims, hatred is never acceptable.

The berakhah prayer—such an important way that our Jewish brothers and sisters pray—has given rise to our prayer of blessing, our Eucharist and the way we pray the Psalms in our worship. There are so many ways that when we as Catholics come into our church, and we begin our liturgical life together, we are related, in that very act, to our brothers and sisters in the Jewish community and we should know that.

Our Catholic liturgy has a great debt that goes back to the first Christians, including our Lord and Blessed Mother herself: They were Jewish. And when they prayed, they prayed in the Jewish context. Those first Christians came from the Jewish community. And so they brought with them their heritage of prayer and worship and language. That has highly influenced the way that we Catholics pray each and every time we gather in church. So it’s important that our Catholics know that and respect that.

MJO:Since there are so many societal challenges today—social justice issues, race issues, equality issues—this is another one. How do Catholics balance all these different issues in the public square?

WG: As you mentioned, there’s an awful lot on our plate in terms of the world in which we live. What I would like to make sure that our people, our Catholic people, realize is that it’s not a matter of choosing one and ignoring the other. It’s a matter of seeing them as interrelated hatred.

Whether it be directed towards people of color, immigrants, Jews, Muslims, hatred is never acceptable.

When we as Catholics look at the plate that is before us, in terms of, how do we respond to these societal challenges, we have to begin by saying, you cannot be, as Pope Francis said, a true Christian and an antisemite. Pope Francis has written extensively, and often, and certainly his encyclical, “Fratelli Tutti,” is a prime example of calling us together as brothers and sisters and acknowledging that the problems and the challenges that we face, we do so under the light of the Gospel, but also with a great desire to draw this human family together more effectively. So we Catholics have to balance all of those things.