Cardinal Gregory says Catholics should be ‘outraged’ by rising antisemitism 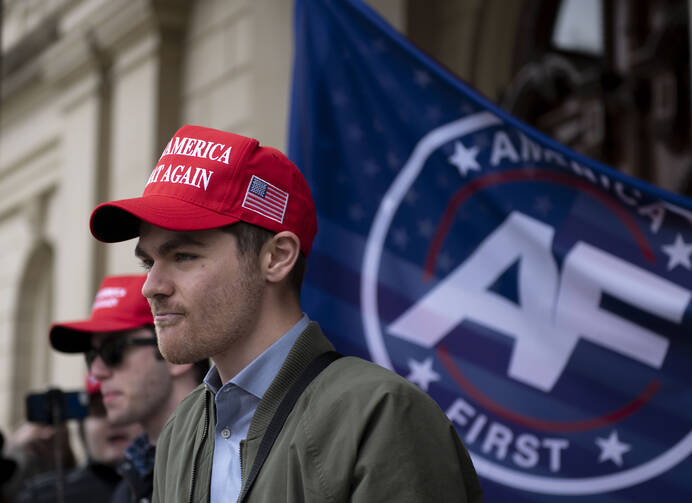 In the wake of recent antisemitic comments from high-profile cultural figures, the need for ongoing dialogue between Catholics and Jews remains essential, those involved in such conversations say.

In an interview with America, Cardinal Wilton Gregory, the archbishop of Washington and the Catholic co-chair of the National Council of Synagogues consultation for the U.S. Conference of Catholic Bishops, said that Catholics have an obligation to be well-informed about the news, especially when antisemitic comments or actions are prevalent.

“It’s important that we Catholics stay on top of what’s happening and witness the destructive forces that seem constantly to be erupting in many—too many—places in our nation,” he said.

In an interview with America, Cardinal Wilton Gregory said that Catholics have an obligation to be well-informed about the news, especially when antisemitic comments or actions are prevalent.

“Attacks against Jewish institutions, including Jewish community centers (JCCs) and synagogues, were up by 61 percent, incidents at K-12 schools increased 106 percent, and incidents on college campuses rose 21 percent,” the report found.

While anti-Jewish incidents, along with other hate crimes, are on the rise more broadly, some recent high-profile incidents have caught widespread public notice. The musician formerly known as Kanye West recently espoused particularly virulent antisemitic views, expressing admiration for Adolf Hitler and claiming that the Holocaust did not happen. Days before he made those comments, Mr. West dined with former President Donald Trump in Florida, along with Mr. West’s guest at that dinner, the online provocateur Nick Fuentes, a Catholic who regularly expresses antisemitic and white supremacist views.

In October, Brooklyn Nets guard Kyrie Irving shared a link on his Twitter account promoting an antisemitic film, which includes claims that the Holocaust did not happen. Mr. Irving was suspended by the team after initially refusing to apologize or state that he is not antisemitic. He eventually apologized and was reinstated, though just this week Nike announced it had ended its relationship with Mr. Irving.

Cardinal Gregory, who has been archbishop in the nation’s capital since 2019, said Catholic political figures should, “without a doubt,” condemn antisemitic behavior, adding that they “should be outraged and embarrassed and concerned, in their position as leaders, and as Catholics in the public arena.”

“The rising trend of antisemitic incidents has become even more painful in light of the Church’s relationship to the Jewish tradition and our connections to the Jewish people in dialogue and friendship,” the statement read. “Outraged by the deeply hurtful proliferations of antisemitic rhetoric, both online and in-person, and the violent attacks on Jewish individuals, homes, and institutions, we wish to convey our sincere support to the Jewish people.”

The bishops continued, “In unequivocal terms, we condemn any and all violence directed at the Jewish people, whether motivated by religious, racial, or political grievances. We furthermore denounce any rhetoric which seeks to demonize or dehumanize the Jewish people or Judaism as a religious tradition.”

Though the timing of the statement’s release made it seem like bishops were reacting to the news cycle, “this statement has actually been in the works for quite a while,” Rebecca Cohen, a researcher at the U.S.C.C.B.’s Secretariat for Ecumenical and Interreligious Affairs, told America. She said the statement was part of a yearslong effort among Catholic bishops to call attention to antisemitism, which includes an emphasis on ongoing dialogue.

Cardinal Gregory, who has been archbishop in the nation’s capital since 2019, said Catholic political figures should, “without a doubt,” condemn antisemitic behavior.

Ms. Cohen said that engaging in this kind of dialogue can, at times, be uncomfortable for Catholics given the church’s history of Jewish persecution. But she said that confronting that history is an essential task.

Malka Z. Simkovich chairs the Jewish studies program at the Catholic Theological Union in Chicago. She said that Catholics have a unique role in condemning anti-Jewish statements and actions because of the church’s historic role in persecuting Jews.

“The church has already provided Catholics with precedent to do that,” Dr. Simkovich told America, pointing to “Nostra Aetate,” the Second Vatican Council’s teaching document that condemns antisemitism. “It's very disheartening that there’s still resistance among Catholics to admit to the unique role that the church has had in regards to the suffering of the Jews.”

Catholics who came of age after Vatican II may not as attuned to the the church’s historic antisemitism, which can cause some younger believers to view anti-Jewish hatred as simply one more social ill that needs addressing, Dr. Simkovich said.

“I really resist it when people say, ‘Oh, we have to combat antisemitism because it could lead to other forms of hatred against other minorities,’” she said. “Antisemitism has to be taken on its own as a scourge that needs to be addressed.”

“We don’t know our own history,” Cardinal Gregory said. “The farther away we get from a terrible moment in history, there are fewer people who have firsthand knowledge of it.”

The success of Catholic-Jewish dialogue circles lies in the personal relationships that often develop among participants. Those friendships provide the basis for offering support during particularly painful episodes of antisemitism. But Dr. Simkovich admits that translating the advances made in those smaller conversation circles into wider understanding can be a challenge.

“There’s a huge disparity between what’s happening in these smaller communities of dialogue and what I’m seeing from people in the pews,” she said. “The question is how to bridge this gap between a very small but robust community of Catholic and Jewish scholars and clergy and what’s happening in the broader Catholic community, which tends to be less passionate about combating anti-Judaism.”

“I try to be optimistic because I think change is really slow,” Dr. Simkovich said. “We're talking about a generation that’s pushing back against 2,000 years of history, and it’s going to take us a very long time to affect the change that we are impatient to see now.”

The church will mark 60 years since the publication of “Nostra Aetate” in 2025, which means there are fewer Catholics today who remember a time when Catholic teaching was far less hospitable to Jews and other religious groups than it is today. That means it is especially important for younger Catholics to learn about that history—even if it feels painful.

“Whether it be directed towards people of color, immigrants, Jews, Muslims, hatred is never acceptable,” the cardinal said.

“We don’t know our own history,” Cardinal Gregory said. “The farther away we get from a terrible moment in history, there are fewer people who have firsthand knowledge of it.”

Future leaders, especially, must educate themselves about past challenges if they want to effectively address contemporary issues, he added.

Cardinal Gregory said that while not all Catholics will have the opportunity to engage in projects aimed at dialogue with the Jewish community, they should nonetheless seek to learn about Judaism’s impact on their faith. He pointed to the liturgy and Catholic prayer life as good examples.

“Our Catholic liturgy has a great debt that goes back to the first Christians, including our Lord and Blessed Mother herself: They were Jewish,” he said. “And when they prayed, they prayed in the Jewish context.”

Cardinal Gregory pointed to Pope Francis, who has said that a true Christian cannot be an antisemite. He said he recognized that there are many areas of injustice prevalent in our society, and said Christians should see “them as interrelated hatred.”

“Whether it be directed towards people of color, immigrants, Jews, Muslims, hatred is never acceptable,” the cardinal said.