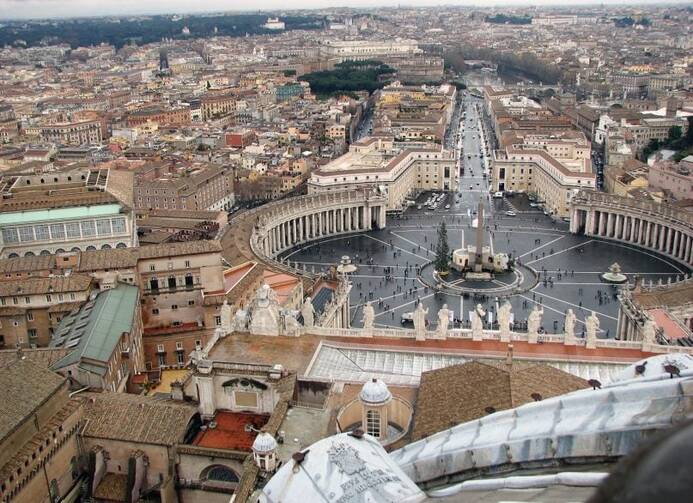 A view of St. Peter’s Square, Vatican City and Rome from the top of Michelangelo’s dome in St. Peter’s Basilica. Photo by Sandexx/Creative Commons/CC BY-SA 3.0

On Wednesday, the Vatican’s chief prosecutor, Alessandro Diddi, told the Vatican tribunal overseeing the trial that he had received information that the monsignor had been manipulated into making statements in the case.

By the time Thursday’s court session began, an Italian news outlet had revealed that the information had come from Genevieve Ciferri, a friend of Perlasca’s, who had written to the prosecutor over the weekend.

By the time Thursday’s court session began, an Italian news outlet had revealed that the information had come from Genevieve Ciferri, a friend of Perlasca’s, who had written to the prosecutor over the weekend. Ciferri claimed that Francesca Immacolata Chaouqui, a former economic official at the Vatican, had prompted Perlasca in his pretrial statements to investigators.

Chaouqui is a familiar figure in Vatican legal circles: In 2017, she was sentenced to a year in prison by a Vatican court for leaking state secrets in a scandal known as “Vatileaks.” (Her sentence was later suspended.)

Based on Ciferri’s claim, Diddi asked the Vatican judges for time to investigate the new information and said he is considering charges of perjury against Perlasca.

Lawyers for the trial’s 10 defendants, meanwhile, accused Chaouqui of “misdirection, fraud and threats” that would significantly impact their clients’ cases. They insisted that the entirety of Perlasca’s pretrial testimony, including parts redacted by prosecutors to protect other investigations, be released.

The judges ruled that the trial would continue, urging prosecutors to investigate Perlasca’s earlier testimony over the winter holidays.

The judges ruled that the trial would continue, urging prosecutors to investigate Perlasca’s earlier testimony over the winter holidays. They also said that Ciferri and Chaouqui will testify in court next year.

Perlasca headed the administrative office of the powerful Secretariat of State in 2018, when funds earmarked for the pope’s charitable works were invested in high-end London real estate, a deal that prosecutors claim lost the church more than 20 million euros. Originally considered a target of the investigation into the purchase, he became a prosecution witness, supplying testimony particularly damning for his former superior, Cardinal Angelo Becciu.

Becciu, one of the 10 defendants now on trial, is charged with funneling Vatican funds to friends and relatives. He has strongly denied the allegations.

When Perlasca testified last week, defense lawyers highlighted what they said were inconsistencies in his story, and the monsignor often said he could not remember many of the events at the heart of the trial. At several points during the cross-examination, Vatican judge Giuseppe Pignatone warned Perlasca that he risked perjuring himself. The monsignor struggled especially to remember details regarding his written testimony to Vatican prosecutors.

Ciferri told Vatican prosecutors in documents sent to Diddi’s phone that she told Perlasca what to write in his testimony, and that she in turn was following Chaouqui’s instructions. Ciferri offered ample evidence of her claims in the form of text messages and audio recordings. She said Perlasca did not know that Chaouqui was behind the instructions.

Following the instructions, Perlasca told the judges on Wednesday, he invited Becciu for dinner at a restaurant in Rome where he secretly recorded the cardinal while asking him questions about the trial case. Perlasca allegedly handed over the recording and transcript of the conversation to Vatican prosecutors.

Perlasca testified that he had received 15 messages from Chaouqui over several months beginning in August 2020, in which, he claimed, she tried to intimidate him by “claiming to be well acquainted with the Vatican prosecutors, the gendarmes and others.”

“I forgive you Perlasca, but you owe me a favor,” Chaouqui wrote in a message to the monsignor, according to his testimony. “Don’t block me or you will appear on the newspapers.”

Perlasca said he kept Chaouqui “at arm’s length as much as possible.”

Diddi said he had interrogated Perlasca without any knowledge about his conversations with Chaouqui. Diddi pushed back against the news report, which suggested that the Vatican prosecutors were behind Chaouqui’s messages to Perlasca, designed to move the investigations forward.

“I didn’t do it,” Diddi said, “do whatever you want, you can even seize my phone if you want.” He also said that his office intends to lead an investigation into the matter “to avoid any other attempts at misdirection.”