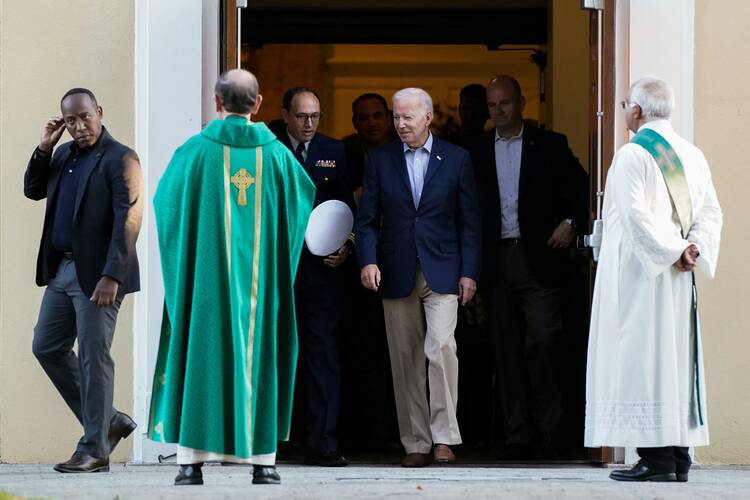 Speaking this Tuesday in Washington, D.C., President Joseph R. Biden Jr. called for voters to expand the Democratic congressional majority in the upcoming election, promising that if they did so, the first bill he would send to the new Congress would codify abortion rights formerly guaranteed under Roe v. Wade into federal law.

At the end of that speech, in a bit of campaign boilerplate, Mr. Biden declared, “We are the United States of America, and there’s nothing beyond our capacity.” But the whole premise of his speech was that reaching any kind of political compromise on abortion or even attempting to find legislative solutions that respect the lives and dignity of both pregnant women and children in the womb is, and indeed ought to be, beyond our capacity. Unfortunately, the likeliest explanation for that position is that any such compromise is beyond the political imagination of most elected Democrats and contrary to their incentives for re-election.

What Mr. Biden and other Democratic politicians are hoping for in November is a nationwide replay of the Kansas special election in August, in which voters overwhelmingly rejected an amendment to the state constitution that would have allowed legislators to restrict access to abortion. But there are many reasons—even beyond polling that suggests Democrats face a steep climb to hold the House in the first place—to doubt that such a strategy can succeed.

For one, the vote in Kansas maintained the status quo. After the Dobbs ruling rejected the abortion rights Roe had found in the U.S. Constitution, Kansas voters were offered a clear choice about whether they wanted to override a similar interpretation of their state constitution. They voted no. But even though federal abortion rights legislation is often described as “codifying Roe,” it is not possible to rewind the tape of constitutional interpretation. The pre-Dobbs state, which was already unstable, is over.

Constitutional authority of Congress to legislate national abortion rights is unclear for the same reasons that Roe itself was constitutionally shaky.

Passing a new federal law would require not only a strong legislative majority but discussion and resolution of the host of questions that were continually subject to litigation under Roe. “Codifying Roe” is actually a call to legislate a maximalist interpretation of Roe that had been repeatedly challenged, and gradually pared down, over decades. And even under a Democratic majority, the Republicans would be sure to point out such overreach and exact a political price for it.

For another, constitutional authority of Congress to legislate national abortion rights is unclear for the same reasons that Roe itself was constitutionally shaky: because the Constitution is silent on abortion, which has historically been subject to state legislation. Even some proponents of federal action to secure and expand access to abortion recognize that an outright codification of Roe would be legally fragile. (Similar arguments can and have been made about Republican proposals for a national abortion ban.) The conservative majority on the Supreme Court that decided Dobbs is already skeptical of expansive congressional authority under either the 14th Amendment or the Commerce Clause. Setting up a constitutional conflict between state-level abortion restrictions and a federal right to abortion would serve up an opportunity to limit congressional authority on a wide range of issues that the court might be only too eager to take up.

From a certain dismal perspective on politics, that kind of pitched constitutional battle might be exactly the point. If one believes that the current Supreme Court, established by Republicans’ scorched-earth approach to judicial nominations, is basically illegitimate, then the crisis likely to be provoked by the court overruling or limiting a national law on abortion rights might seem like a opportune step toward court reform. But it is wildly disingenuous to campaign for “codifying Roe” as responsive to most Americans’ desire for some kind of resolution of our fights over abortion when it only sets up a new and protracted constitutional battle in which the legality of abortion remains a matter for the Supreme Court.

The attempt to exploit the abortion issue for electoral gain is, of course, not unique to the Democrats. Senator Lindsey Graham’s proposal for a national ban on abortion after 15 weeks of gestation would lead to similar court battles. (The measure would stand less of a chance of passing than a codification of Roe, even under a Republican majority, and would be instantly vetoed by Mr. Biden.) Anyone who endorses the constitutional reasoning in Dobbs should be highly skeptical of a congressional attempt to impose a single national settlement of abortion law.

The likeliest result from this November’s elections will not be a clear mandate one way or the other on abortion.

Perhaps the best evidence that the call to codify Roe is meant to leverage rather than help resolve our national divisions over abortion is a simple thought experiment. If the August vote in Kansas meant that voters were largely supportive of abortion rights as they had been under Roe, then would a November loss of the Democratic majority in the House mean that voters are rejecting the proposal to codify Roe? Unless one believes that Democrats, in response to such a loss, would need to recalibrate their advocacy for abortion rights to a position open to compromise on some significant restrictions on abortion, then “the will of the voters” on abortion is still just a smokescreen for whatever delivers the most political advantage. And by committing their prospective majorities to the codification of Roe, Democrats are assuring that Republicans are able to tell pro-lifers that any vote for any Democrat is effectively a vote for abortion.

Though they would still be subject to constitutional challenges, it is possible to imagine legislative proposals short of a full codification of Roe that would enjoy significant support from the American public. For example, consider a bill that would protect doctors from liability for care provided for ectopic pregnancies or miscarriages that might fall under restrictions from poorly designed state abortion laws but would not attempt to guarantee a broad right to elective abortions. Or even a bill that guaranteed a right to abortion during the first trimester and in cases of rape, incest and danger to the mother’s life but allowed state laws to prohibit abortion otherwise. While such a law would certainly not be morally acceptable to pro-lifers, or to the Catholic Church, it is far closer to the American consensus on the morality of abortion than either an outright ban or a codification of Roe. But for reasons my colleague Robert David Sullivan has explained well, neither side trusts the other to settle for a compromise, and so any step toward one is treated as politically toxic.

[Related: We need to talk about ‘life of the mother’ exceptions in abortion law.]

An earlier version of Mr. Biden—the Mr. Biden who said in an 2015 interview with Americathat pro-life people were “absolutely, positively” welcome in the Democratic Party and directly acknowledged that Catholicism teaches that “abortion is always wrong”—might have been in a position, after Dobbs, to work toward some kind of compromise on abortion. But that Mr. Biden almost certainly could not have won his party’s nomination for the 2020 race. So our dismal political calculus on abortion continues in 2022, with Democrats hoping it can help them to hold their majorities and with many Republicans happy to run against them on the same terms.

The likeliest result from this November’s elections will not be a clear mandate one way or the other on abortion. Instead, we are more likely to see a weak majority in the House and a Senate still subject to the filibuster squabble over national abortion legislation that is unlikely to pass—and guaranteed to wind up in a court battle if it does. While this sounds pessimistic—and it is, at least in the near term—the failure of a national resolution of the abortion question is actually the best outcome politically available, given the depth of our moral divisions over abortion.

After the Dobbs decision was leaked, I wrote about why it was important for pro-lifers to understand the fear and outrage it provoked, even while welcoming the decision. I said that in its aftermath, we “will need to risk listening to each others’ deep convictions and concerns” in order to move the conversation on abortion forward. The call to codify Roe might help elect Democrats, but it will not help us resolve our differences on the issue, nor is it really meant to do so. Even if it somehow passed, it would only leave us stuck in the same place. If we want a politics where we are not permanently at each other’s throats over abortion, then we need a better solution than simply trying to reinstate Roe via national legislation.