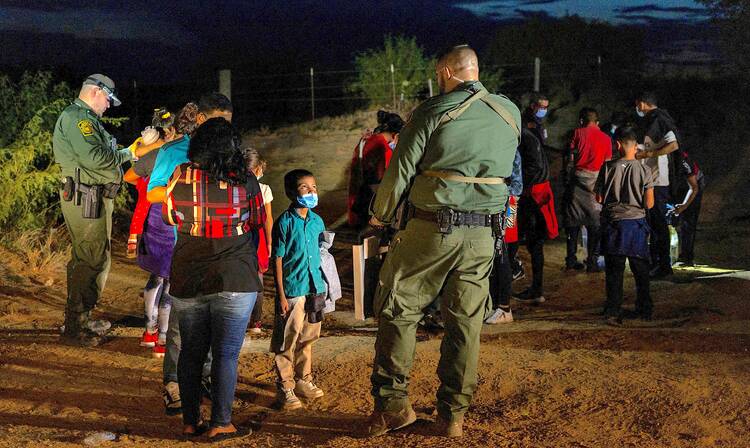 Jefferson, an 8-year old boy from Honduras, is questioned by a border patrol agent on Aug. 26 after crossing the Rio Grande into Roma, Texas.(CNS photo/Adrees Latif, Reuters)

By July, apprehensions at the southwest border of the United States for fiscal year 2022—ending in September—had already hit 1.94 million, the highest number ever reported by U.S. Customs and Border Protection. But in a report in June, agency officials said that the large number of expulsions during the pandemic had contributed to a higher-than-usual number of migrants making multiple border crossing attempts, “which means that total encounters somewhat overstate the number of unique individuals arriving at the border.” Repeat offender numbers were up sharply in 2020 and 2021, when they represented more than a quarter of all apprehensions.

Border Patrol officials said that the large number of expulsions during the pandemic had contributed to a higher-than-usual number of migrants making multiple border crossing attempts.

Misleading information or politically charged rhetoric about immigration has taken root among a significant portion of the American public, according to a recent survey conducted by NPR/Ipsos poll researchers. Overall, perceptions about immigrants and immigration policy depend heavily not only on one’s party affiliation but also media consumption.

54% believe it is at least somewhat true that the United States is experiencing an “invasion” at the southern border. Republicans—76%—believe this more than Democrats—40%—and independents—46%. And 91% of Republicans who cite Fox News or other conservative media as their main news source accept the invasion narrative.

51% support giving legal status to undocumented or illegal immigrants brought to the U.S. as children, down from 65% in 2018.

46% support for building a wall or fence along the entire U.S.-Mexico border; pre-pandemic, a majority opposed the wall.

56% believe that immigrants are an important part of American identity, sharply down from the 75% who believed that in 2018.

56% of the survey respondents believe that immigrants are an important part of American identity, sharply down from the 75% who believed that in 2018.

35% believe that there is a “deep state” effort to open U.S. borders to more immigrants, including 58% of Republicans, 19% of Democrats and 30% of independents.

50% believe it is at least somewhat true that migrants bringing fentanyl and other illegal drugs over the southern border are responsible for the increase in drug overdoses and deaths in the United States, including 70% of Republicans, 35% of Democrats and 45% of independents. Republicans who watch conservative news outlets are most likely to believe this—89%—compared with 64% of Republicans whose primary news source is something else.