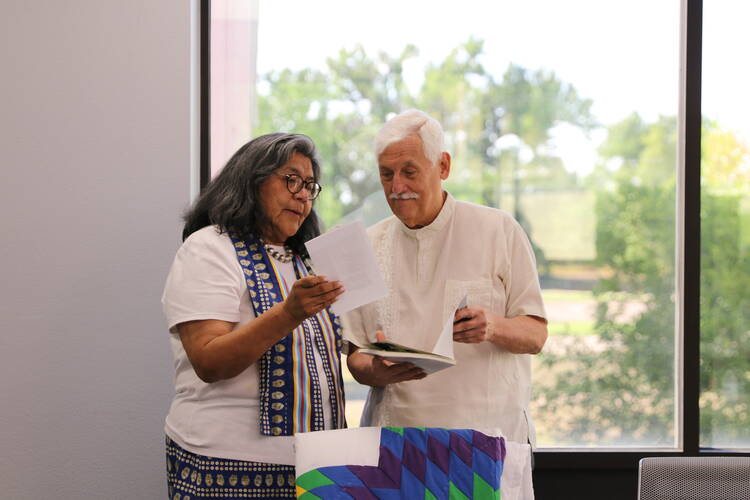 Amid ongoing dialogue about the historic mistreatment of Indigenous communities at church-run boarding schools, the head of the Jesuits, Arturo Sosa, S.J., visited a Catholic community on a South Dakota reservation last month, where he apologized for the religious order’s involvement in past abuses.

The Jesuits sponsor ministries on the Pine Ridge and Rosebud Lakota Reservations in South Dakota. The mission, which once included a residential school, has existed since the late 19th century when Chief Red Cloud invited the religious order to the reservation. Today, the Jesuits sponsor the Red Cloud Indian School, which serves about 600 students, as well as The Heritage Center and six parishes located on the reservation.

In his talk to representatives from the Lakota community on Aug. 17, the Jesuit superior general recalled how some Jesuits historically worked with the Lakota community to find common ground between Catholic and Indigenous spirituality, and he praised efforts to preserve the Lakota language. He also noted changes in recent decades at the school “that flow from a renewed appreciation of the richness of the Lakota culture.”

“When we look back over the road that we have traveled we see that Jesuits also took some very wrong turns.”

But Father Sosa also apologized for past abuses to an audience that included Lakota elders who had attended the residential schools.

“When we look back over the road that we have traveled we see that Jesuits also took some very wrong turns, especially by accepting the American government’s oppressive educational regulations that took children from their families, from their language and from their culture,” Father Sosa said in a talk to representatives from the Lakota community.

Between 1819 and 1969, the U.S. government opened more than 400 residential boarding schools. Hundreds of thousands of Native American children were removed from their homes and placed in these schools in an effort to eradicate Indigenous language and culture. Abuse and mistreatment were common at the schools, a federal report released earlier this year found. The government and religious groups, including the Jesuits, ran the schools.

“On behalf of the Society of Jesus, I apologize for the ways in which St. Francis and Holy Rosary Missions and boarding schools were for decades complicit in the U.S. government’s reprehensible assimilation policies.”

In May 1993, then-superior general of the Jesuits Peter-Hans Kolvenbach, S.J., visited Pine Ridge and apologized for mistreatment, stating: “I realize that we, as Jesuits, have at times been the source of some of that pain. For that, we are deeply sorry.”

In his address, Father Sosa recalled that apology—and added his own.

“On behalf of the Society of Jesus, I apologize for the ways in which St. Francis and Holy Rosary Missions and boarding schools were for decades complicit in the U.S. government’s reprehensible assimilation policies, trying to eradicate your culture,” he said.

Father Sosa added, “I ask for your forgiveness for that and for any other abuses that any of you or your ancestors suffered.”

“I appreciated him coming all the way from the Vatican and acknowledging the role the Jesuits played in disrupting our language and our culture.”

Cecilia Fire Thunder, a former tribal president of the Oglala Sioux tribe, was a residential student at the Jesuit school from 1953 to 1963. She told America that she was struck by Father Sosa’s acknowledgment of the role the Jesuits played in the “disruption of our culture.”

“I really appreciated his demeanor, his honesty and most importantly, I appreciated him coming all the way from the Vatican and acknowledging the role the Jesuits played in disrupting our language and our culture,” said Ms. Thunder Fire, who met with Father Sosa along with a small group of boarders.

In his talk, Father Sosa highlighted the work that some Jesuits did in helping to preserve the Lakota language. Ms. Thunder Fire, who teaches the Lakota language and practices traditional Lakota spirituality, said she remembers speaking with Jesuit priests in her own language when she was a student. But she said she recognizes that many of her contemporaries still deal with trauma and grief related to the school.

Indigenous groups throughout North and South America have pressured Catholic leaders to denounce a series of papal bulls dating back to the 15th century.

“You cannot undo that,” she said. “But one thing you can do is invest in the ongoing efforts to strengthen the immersion programs that teach our language.” Because, she said, “our language clearly defines who we are.”

Father Sosa said he also met with leaders from the Rosebud and Oglala Sioux tribes, who asked him to deliver a letter about the doctrine of discovery to Pope Francis.

In recent years, Indigenous groups throughout North and South America have pressured Catholic leaders to denounce a series of papal bulls dating back to the 15th century, known collectively as the “doctrine of discovery.” These papal decrees granted the monarchs of Portugal and Spain the right to colonize non-Christian lands and enslave Indigenous peoples.

Francis has met with Indigenous leaders, including during his recent visit to Canada, where he apologized for abuse carried out at church-run residential boarding schools. During his flight back to Rome, when asked why he did not more forcefully denounce the doctrine of discovery, including the ways it is still cited in U.S. and Canadian law, the pope said he did not understand the complexities of the issue.

During his visit to Pine Ridge, Father Sosa said he would hand deliver the letter to Pope Francis and “also talk with him about what I have learned during my visit with the Lakota these days.”

Indigenous groups have pressured Catholic leaders to denounce a series of papal bulls dating back to the 15th century that granted the monarchs of Portugal and Spain the right to colonize non-Christian lands.

Maka Black Elk, the executive director of Truth and Healing at Red Cloud Indian School, told America that Father Sosa’s promise to deliver the letters from people living on the reservation to Pope Francis was the most moving part of the visit. He said he hopes that the letters will move Pope Francis to be more forthright in his condemnation of the doctrine of discovery and the existing laws that cite the doctrine.

During his four-day visit to Pine Ridge, which came as part of a longer tour of the United States, Father Sosa met with students, participated in a Lakota-language prayer service and had dinner with the Lakota community. He also presented to the community an apostolic blessing from Pope Francis, which encouraged Lakota Catholics “to live their faith fully while preserving their culture.”

Through meetings with and letters from representatives from the Indigenous community, Father Sosa said he learned of the many challenges facing people who live on the reservation.

“I have heard so much about gun violence, about methamphetamine and substance abuse, about poverty and unemployment, about racism, about the weakening of political action and about the loss of hope and meaning,” Father Sosa said. “Here and elsewhere we hear of war, forced displacement, populism and polarization.”

Father Sosa also said he was inspired by his meetings with young people.

“But I have also heard young people speak of their dream of a different future, a future built on the gifts of creativity, compassion and courage, a future that rejoices in diversity and interculturality, a future in which everyone enjoys the fullness of life in love and service,” he said.