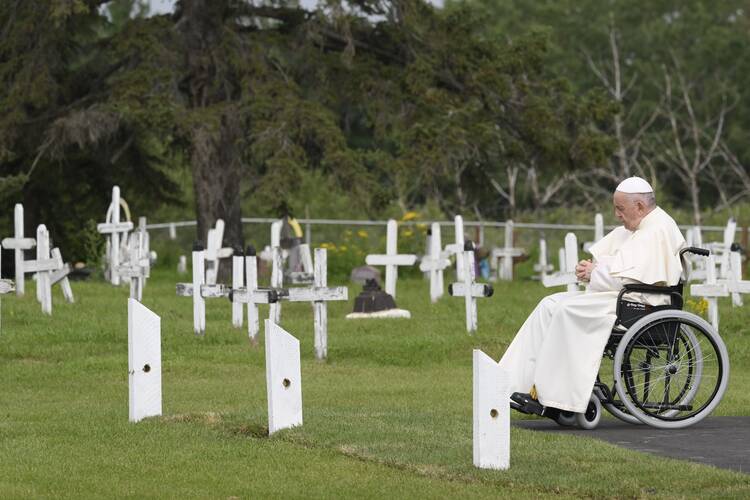 Update: The tribal council voted on July 27 to rescind a motion passed on July 26 that had suspended mission and church activity on the Pine Ridge reservation. Council members explained that many Pine Ridge residents contacted them concerned that the new order meant that regular church activities—wedding, funerals, Bible study—had to be halted. After discussion about creating a 90-day compliance period for the registration of existing missions and churches and the exclusion of Native American churches or faith groups from the ordinance altogether, the council voted to simply rescind the original motion.

Images of Pope Francis meditating before the graves of Indigenous children who perished at a church-run residential school evoked remorse for past wrongs and hope for reconciliation in the future this week. But even as the pope made efforts toward healing in Canada, back in the United States a passionate discussion began at a tribal council meeting on the Pine Ridge Reservation in South Dakota. It offered a poignant reminder that injuries are still being visited on Indigenous people in North America by forces of Christian evangelization and cultural assimilation.

After a brochure that literally demonized historical figures and traditions of the Oglala Lakota Sioux people was handed out to young people visiting a nondenominational service site, elders of the Oglala Sioux Tribal Council took action, approving a new ordinance on July 26 that seeks to contain a proliferation of Christian charity, service and evangelization efforts on the reservation.

After a brochure that demonized traditions of the Oglala Lakota Sioux people was handed out to young people, tribal leaders took action, approving an ordinance that curtails Christian missions at Pine Ridge.

The ordinance calls for a halt to all church and missionary activity at Pine Ridge until employees and volunteers working for mission and service groups pass background checks. It also requires a comprehensive audit of those entities to determine how much money they are raising, if they were exploiting images of Lakota children in doing so and how they are spending the donations they accept. Elders agreed to beef up existing registration statutes for not-for-profit mission groups that establish themselves at Pine Ridge, where those groups propose to respond to poverty and social challenges that plague the community.

The young people who brought the pamphlet to the attention of tribal elders urged the council to “decolonize” the reservation by shutting down new evangelical outreach programs and creating stronger tribal oversight of existing missions.

Speaking during an open session in support of the suspension, Tyler Star Comes Out said: “Churches have always played a violent role in our communities.” She urged an effort to “decolonize mind, heart, spirit, space, land and knowledge.”

“And we are angry but also heavy-hearted because: Why is this still happening? Do you see the way these people talk to our parents and to our elders, and can you imagine what they say to our children and behind closed doors?”

Members of the council have not responded so far to requests for comment on how the ordinance will be administered. A spokesperson for the Red Cloud School, a Catholic institution administered by the Jesuits and the Lakota people, said school officials were awaiting further guidance from tribal leaders to discern how the new ordinance would affect school programs and its related efforts.

“Our nation is currently living in the aftermath of a cultural genocide that was committed by the Catholic Church and the U.S. government, who still need to be held accountable for their actions.”

The spokesperson pointed out, however, that staff and volunteers at the school and its adjoining institutions, many of whom are members of the Oglala Lakota community, are already background-checked according to new child-safety protocols instituted in the aftermath of the church’s abuse crisis.

The ordinance passed by the council responds to longstanding grievances among many at Pine Ridge over the proliferation of church-related not-for-profits on reservation land. The groups engage in a gamut of uncoordinated relief and charity efforts while soliciting millions in donations each year. But the catalyst for the unprecedented action to contain those self-appointed missions was the distribution of a pamphlet allegedly handed out during a presentation by a Baptist minister at a nondenominational service site, The Dream Center. Its content, which described figures and aspects of Lakota culture and history as demonic, provoked the outrage of young people at Pine Ridge, who demanded that tribal elders respond.

After reviewing a copy of the tract on July 22, Council President Kevin Killer ordered the Jesus Is King Mission and the missionary who allegedly produced and distributed the material, Matthew Monfore, to leave the Oglala Lakota Sioux Nation “immediately and cease any further hate speak action.”

During open discussion before the council, Lori McAfee, C.E.O. and president of Wings As Eagles Ministries, which sponsors the Dream Center, denied any connection to the incident or the missionary who distributed the material, explaining to the council that she had been blindsided by the controversy. The council ordered an investigation into the events leading up to the distribution of the pamphlet and the center’s ongoing presence at Pine Ridge.

“We’re at a point, where we as a collective either revive our Lakota way of life or the next generations will lose it forever.”

In the wake of the controversy, all Christian missions on the reservation face new scrutiny. The Catholic legacy at Pine Ridge was noted with particular bitterness by another young Lakota woman who addressed the council before the vote. “Our nation is currently living in the aftermath of a cultural genocide that was committed by the Catholic Church and the U.S. government, who still need to be held accountable for their actions,” said Eleanor Ferguson, reading a statement on behalf of the International Indigenous Youth Council. “Our way of life has been under attack since Christopher Columbus set foot on Turtle Island and inserted the Doctrine of Discovery upon our Indigenous nations. The Doctrine of Discovery gave the church the authority to justify murdering and raping our women and children, colonizing and desecrating our sacred lands in the name of Jesus Christ.

“Not one follower of the Catholic or Christian church has or will go to heaven until this vile genocide is fully acknowledged and ended.”

“We’re at a point,” Ms. Ferguson said, “where we as a collective either revive our Lakota way of life or the next generations will lose it forever, which is why we are here to demand [that] the Oglala Lakota Sioux tribal council take immediate action against all churches and missionaries on our territory who are using impoverished children for financial gain.

“We can no longer allow these people to operate on our territory until the church has been held accountable for the mass genocide they’ve committed against the Indigenous nation.”